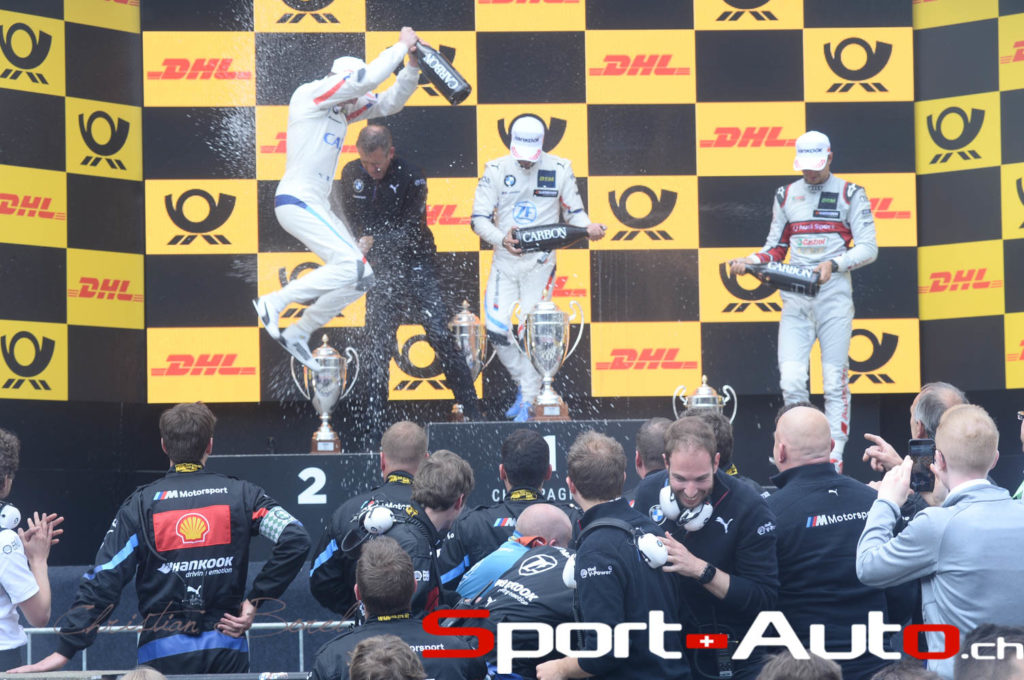 Philipp Eng earned an emotional maiden victory as the DTM returned to its birthplace at Belgium’s Zolder circuit. The Austrian BMW driver benefited from a mid-race Safety Car period, that carved the race in half, and enabled him to take full advantage of an early stop for tyres to take victory in DTM at his 23rd attempt.

« I want to dedicate this win to Charly Lamm, » Eng said afterwards. « He was a good friend to many of us, and a special mentor to me. He told me to chase my dream. So I did, and here I am. Thank you Charly, I could feel you with me today. »

Having started from the fourth row after qualifying seventh, Eng benefited from a Safety Car intervention to retrieve the stranded R-Motorsport Aston Martins of Daniel Juncadella and Jake Dennis. The Safety Car wound the field in for five laps and enabled Eng, who along with a clutch of other drivers had already completed his mandatory mid-race stop, to narrow the gap to the leaders.

At the restart, the Austrian also overtook his fellow BMW driver Joel Eriksson (SWE), the decisive manoeuvre of the race, moved past Rene Rast and established a small but critical lead at the front.

For Eng’s squad, BMW Team RBM, victory in the third race of the current DTM season was also a much-celebrated home win. The team, run by Bart Mampaey, is based in Mechelen, only 72 kilometres from Zolder.

A strategic roll of the dice

The Safety Car gave the early stoppers a clear advantage: fourth position went to Loïc Duval (FRA, Audi), who had completed his stop on the same lap as race winner Eng. Due to a jump start, Duval had to additionally complete a five-second stop-go penalty in the pits. Right behind him, fellow Audi driver Mike Rockenfeller (GER) finished fifth. After a poor qualifying performance, Rockenfeller worked his way up after making his mandatory pit-stop, followed by another precautionary stop during the Safety Car intervention. Paul Di Resta (GBR, Aston Martin) also used a two-stop strategy to work his way up from 16th on the grid to eighth at the finish.

Quotes – race 1, Zolder Philipp Eng, winner : « I am probably the happiest person in the world! I’m so glad to be in the DTM, so happy to be racing for BMW. Winning is simply fantastic. This is the scenario I’ve always dreamt of. However, reality is much better than the dream by far – although the last five, six laps felt as long as a 24-hour race! There was some luck involved as well, but I reckon we deserved this win. I dedicate this victory to my mentor Charly Lamm. » Joel Eriksson, 2nd place : « That was one of the most difficult races of my life. I didn’t made any mistakes throughout the race, but, towards the end, Nico Müller put me under massive pressure. Luckily, I was able to keep him at bay – even thought, towards the end, my tyres were worn considerably. But I’m happy – both for the BMW team and also because our strategy was effective today. Philipp Eng is one of my closest friends, so I’m really happy for him. » Nico Müller, 3rd place : « Here at Zolder, overtaking is really difficult. I tried to keep the pressure up until the end, but I was struggling with tyre degradation myself in the closing stages. We can be really happy with the result. Finishing on the podium after the qualifying result I had is great, even though there was some luck involved, too. »