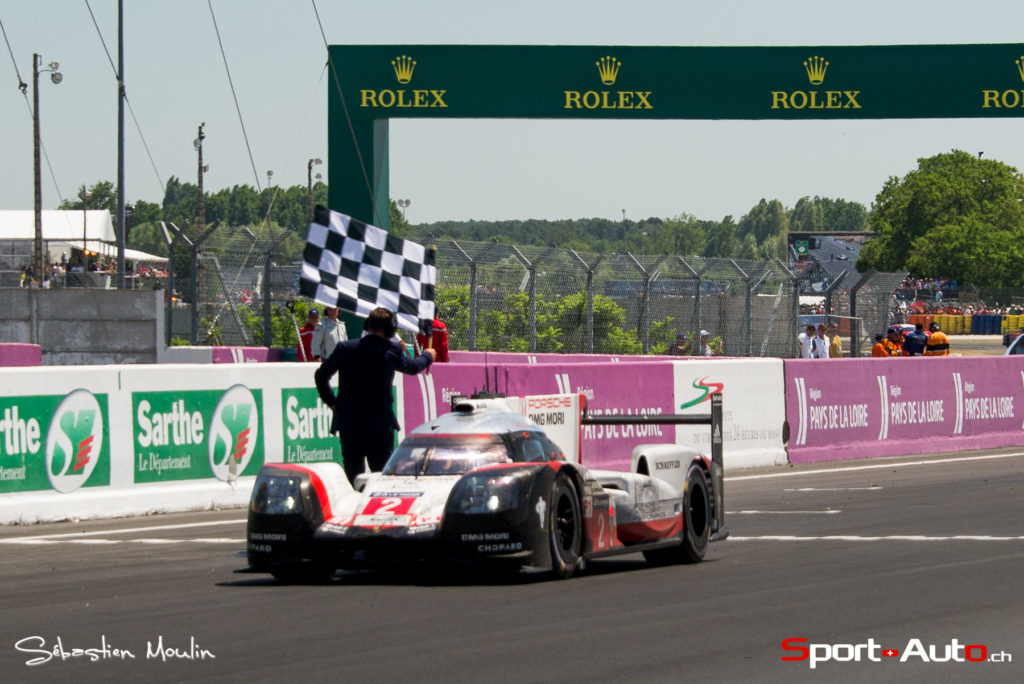 At 18:30 on Saturday evening the Le Mans 24-Hours looked over for the Porsche 919 Hybrid of Earl Bamber (NZ), Timo Bernhard (DE) and Brendon Hartley (NZ). Their car had no front axle drive anymore, was repaired for 1.05 hours and rejoined the race 18 laps behind. But the 85th running of the endurance classic in Le Mans produced such dramatic changes that the impossible ultimately came true: After an enormous effort, the trio sliced through the field from 56th position to overall victory. For Le Mans record holder Porsche, it is the 19th overall win in the world’s toughest race and the third in a row meaning the German manufacturer can now keep the famous trophy.

For Earl Bamber it is his second Le Mans overall win at the wheel of the Porsche 919 Hybrid after 2015. Timo Bernhard also scores his second Le Mans overall win. Following on from his maiden win in 2010 when he was loaned to Audi, he had dreamed to repeat it one day with Porsche. Brendon Hartley was arguably the hungriest of this year’s six Porsche LMP works driver squad as his name had yet to be engraved onto the big trophy.

How the final phase went for car number 2: When the number 1 sister car stops on track soon after 11am after having led the race for more than ten hours, the time for the hunters had arrived. Hartley continuously improves during a multiple stint. After 312 laps, he comes in for his final refuelling stop then after 325 laps he hands over the car in fourth position to Bernhard. At 12:50pm, the 919 Hybrid is back on the same lap as the leading car – it is race lap 330. After all LMP1 hybrid works cars have either retired or been delayed, an LMP2 leads outright. After 338 laps Bernhard comes in for fuel and on lap 347 he takes the lead. His penultimate refuelling stop is after 351 laps before a final splash & dash after 360 laps. After 367 laps in total Bernhard takes the chequered flag to fulfil a dream.

Quotes after the race:

“The ‘triple’ in Le Mans is a dream come true for Porsche and the way this third consecutive win happened is very special. I’m proud of the Porsche Team that kept fighting despite the long stop for repairs. This success also came about thanks to strong E performance and innovative hybrid technology.”

Fritz Enzinger, Vice President LMP1: “One of our ambitious targets for the 2017 season was to achieve a hat-trick at Le Mans. But what we have gone through over the past 24 hours, you could not imagine in your wildest dreams. This 24-hour race just pushed everything and everyone to the limit. It is unbelievable what you can achieve in a focussed team effort. Sometimes it is not the fastest car but the best team performance that makes the difference. This team is the best of all and made today’s success possible. The reaction from everywhere is overwhelming – from Porsche employees and also around the world. Personally I can only say thank you to Porsche for putting me in the position to set up such a great programme and thanks to every single team member for the total support and the great team spirit.”

Andreas Seidl, Team Principal: “It’s hard to find words for what happened. The drivers and the entire team have done an amazing job. We can put two tough weeks behind us that provided some highs and lows but we fought with typical Porsche spirit. It will take some time for what we have achieved today to sink in. We’ve now won Le Mans three times in a row which is just sensational. The team worked relentlessly for this over the past twelve months. Toyota was a very strong competitor. They pushed us to the limits and beyond and we both paid the price. It is a sad that Neel Jani, André Lotterer and Nick Tandy retired from the race because they controlled it for a long time. But Earl Bamber, Brendon Hartley and especially Timo Bernhard deserved to take the race win. Timo was the development driver right from the beginning of the programme. After the long repairs, the three of them kept fighting and were ultimately rewarded.”

Drivers Porsche 919 Hybrid car number 2 Earl Bamber (26, New Zealand): “I can’t believe we’ve managed to pull this one off having been at the back of the field after an hour in the pit-box. Both Brendon and Timo have been part of the Porsche LMP programme from the beginning while this victory is as much down to the guys in the pits. Without their hard work we wouldn’t have got back racing again so this win is down to them.”

Timo Bernhard (36, Germany): “It feels surreal. When I joined Porsche as a junior driver back in 1999, I carefully developed the dream to perhaps one day get the chance to fight for overall victory at Le Mans. I hoped I would be good enough to really do this one day. Now, 18 years later, we have achieved it together. The final lap was very emotional for me. It will take some time before I realize what has happened.”

Brendon Hartley (27, New Zealand): « Le Mans is one crazy race. The mechanics worked incredibly hard on Saturday evening to get our car repaired in super fast time and since that moment Timo, Earl and myself, together with our engineers, have been pushing hard, 100% every second, and desperately hoped that our efforts would somehow pay off.”