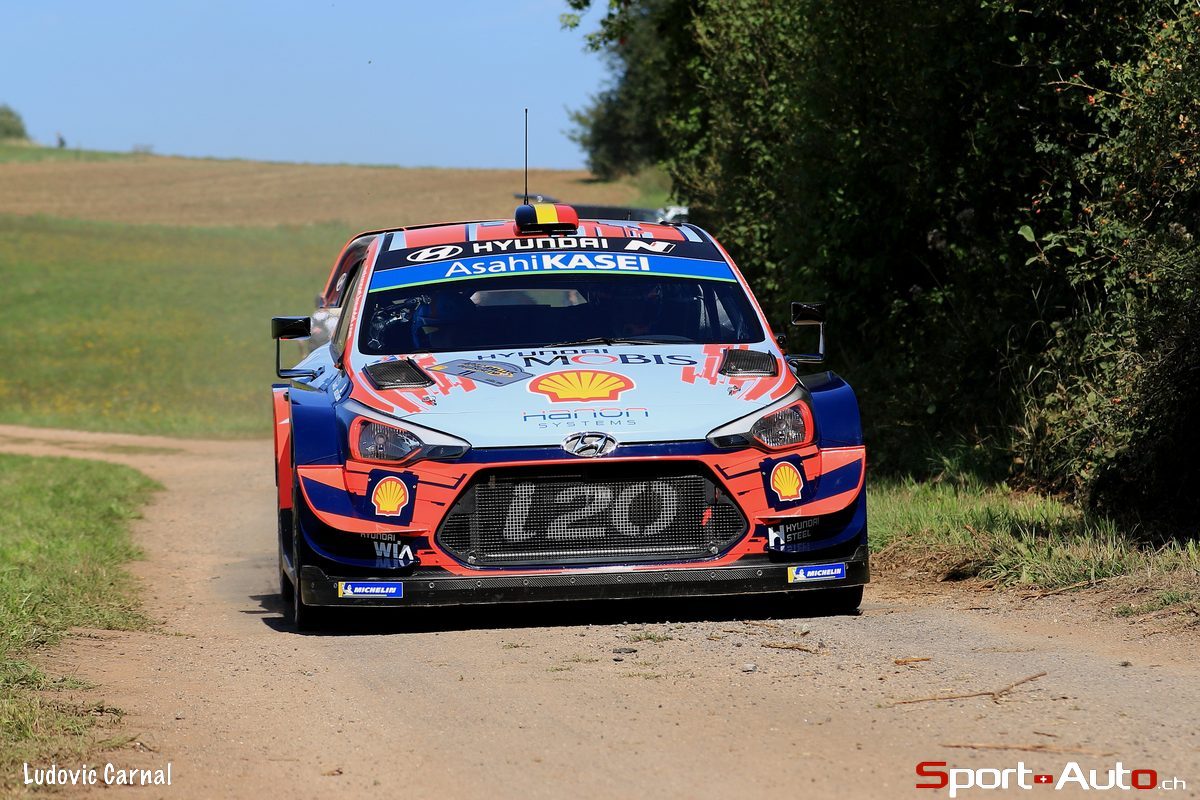 Hyundai Motorsport is involved in a close battle for victory at Rallye Deutschland, round ten of the 2019 FIA World Rally Championship (WRC), after the opening eight stages of the Alzenau-based team’s home event.

Thierry Neuville took the honours in both Stein und Wein stages to conclude the first day in second place overall. The Belgian, alongside co-driver Nicolas Gilsoul, is right on the tail of the current leader with a small 2.8-second deficit.

Dani Sordo and Carlos del Barrio have re-joined the Hyundai Motorsport line-up for the first time since their victory in Sardinia in June. The Spaniards showed encouraging pace on the German tarmac, securing several top-three stage times to put themselves in podium contention, but a transmission problem on the final stage dropped them down to ninth.   Andreas Mikkelsen and Anders Jæger, meanwhile, have focused on finding form in their first tarmac event of the 2019 season, holding sixth place at the end of Friday.

Neuville said: “We have had a great opening day. I have felt very comfortable in the car, especially during the afternoon loop. It has been difficult to keep up the fight with Ott but we’ve done the maximum we could without taking any unnecessary risks. I tried to be fast and clean in all stages, and we’re not far off. We will have to see what more there is to come. Tomorrow will be a very challenging and long day with the mighty Panzerplatte. Anything can happen in this rally so it is important to keep calm and focused.”     Crew Notes: Andreas Mikkelsen/Anders Jæger-Amland (#89 Hyundai i20 Coupe WRC)

Mikkelsen said: “It has been an OK day considering it is our first tarmac WRC event of the season. I wish we had been able to fight further up the field but we aren’t too far off the guys in front, which gives us motivation. I have been struggling mainly with understeer at the entry of corners, so we have tried to adjust the car during the day to keep a higher entry speed. We’re not quite there but we will keep working on it. This is just the start of what will be a long rally and I am sure we have more performance to come.”

Sordo said: “What can I say? A hugely disappointing end to what had been a satisfactory performance up to that point. We showed at times that we had the speed to fight for the podium even if we struggled in some parts. The afternoon started out well, and we were on the verge of moving closer to the top-three, but in the final stage of the day we experienced a transmission problem that lost us a lot of time. All we can do is try to reclaim some time over the next two days but it’s going to be an uphill battle from here.”   Team Director Andrea Adamo: “A bittersweet start to our Rallye Deutschland. Thierry and Nicolas have had an amazing day to remain in contention for the lead. At the same time we have faced a reliability issue with Dani and Carlos that is unacceptable for a team that wants to fight for the manufacturers’ championship. We have to analyse what has happened but it should not have occurred in the first place. Andreas and Anders were able to improve their performance during the day, but they will need a bigger push tomorrow because now they have to be in the fight.”   Saturday at a glance