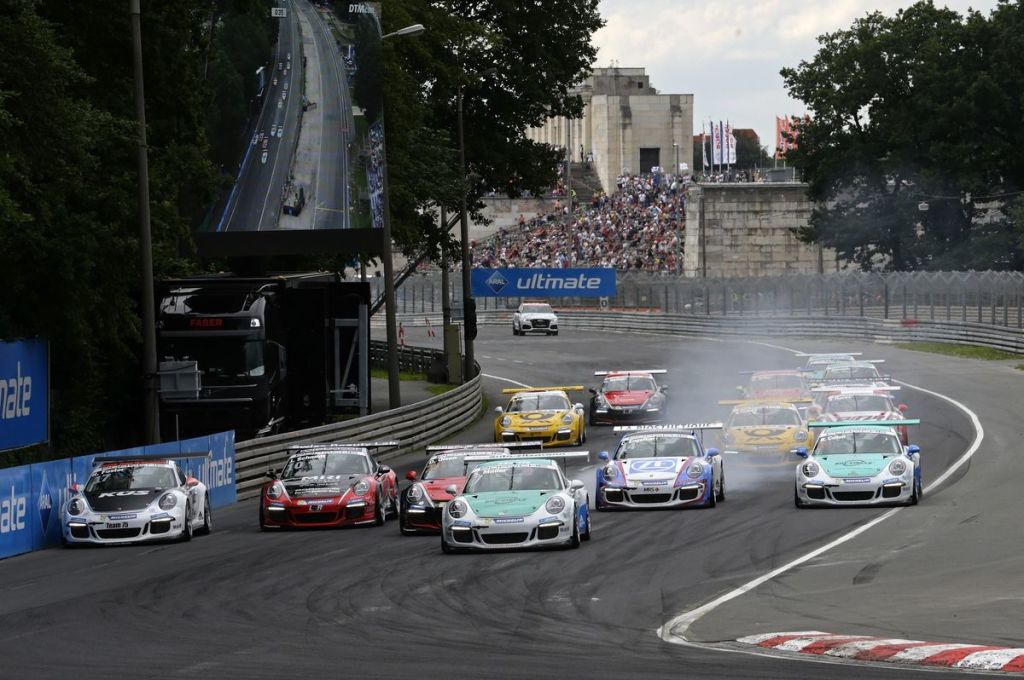 The fifth race weekend of the Porsche Carrera Cup Deutschland ended with Porsche Junior Sven Müller again climbing the podium. On Sunday, the 24-year-old won his eighth race this season on the Norisring in Nuremberg. In the ten championship races contested so far, this begins to take on a record-breaking form: the Konrad Motorsport pilot won convincingly with a margin of 0.9 seconds on the 2.3-kilometre street circuit. Following him over the finish line on positions two and three were Porsche Junior Dennis Olsen (N/Team Lechner Huber Racing) and Christian Engelhart (D/MRS GT-Racing). “From the outside, this perhaps looks easy, but when you make the slightest mistake on the Norisring then you hit the wall. I also came under pressure from my Junior team colleague Dennis. I’m thrilled with my double pole and double victory and I travel home feeling very pleased,” said the Müller, who hails from the Rhineland-Palatinate town of Bingen.

A total of 123,500 spectators flocked to the Norisring this weekend and added to the excited atmosphere on the packed grandstands. For Sunday’s race both Porsche Juniors Müller and Olsen stood side by side on the first grid row. Both got away cleanly at the start with their 460 hp Porsche 911 GT3 Cup to maintain their 1-2 positions to the flag. “I’m really happy with my weekend balance. Second place twice, despite not knowing the circuit – and a street circuit, at that, which are always a little tricky. I managed to stick to Sven today and it was good that he couldn’t pull away from me,” explained Olsen.

Behind the pair a gripping fight for positions developed over the 35 laps. The seasoned Porsche specialist Engelhart finally took the chequered flag in third place after starting from seventh. “I had to avoid two collisions in the first lap and that threw me back. It was an exciting race, but I would have preferred it to be a little less exciting. Third place is okay,” summed up the 29-year-old from the Bavarian town of Wolnzach. The Australian Nick Foster (KÜS Team75 Bernhard) crossed the finish line in fourth place. Jeffrey Schmidt from Switzerland (Team Lechner Huber Racing) collected vital points for fifth, with the Austrian rookie Luca Rettenbacher (Konrad Motorsport) taking home sixth place.

With eight victories under his belt, Müller leads the overall classification with 181 points, followed by Engelhart in second on 165 points and Olsen (154). Cup new-comer Olsen ranks first in the rookie classification and was able to extend his lead this weekend over Rettenbacher (103) and David Kolkmann (97 points, D/Rookie Team Deutsche Post by Project 1). In the B-podium ceremony the Peruvian flag flew on the podium, with Ricardo Flores Ramirez (MRS GT-Racing) from Lima winning the amateur category on Sunday. However, the points’ table in the B-classification is still led by Wolfgang Triller (D/Team Huber Lechner Racing). Konrad Motorsport is first in the team category.

The next races of the Porsche Carrera Cup Deutschland will be contested on the Zandvoort circuit in The Netherlands from 15 to 17 July. The 4.307-kilometre dune circuit is regarded amongst racers as a challenging course which can change by the hour due to the fine sand on the track surface.