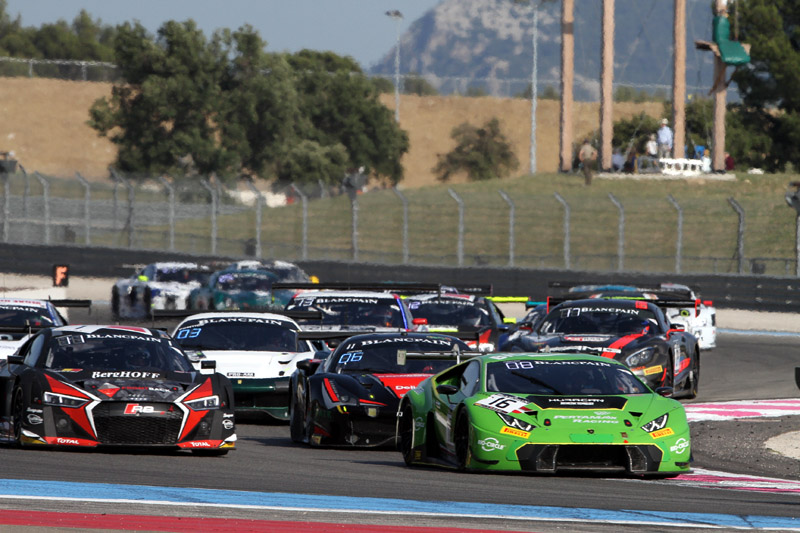 It´s six hours the 1000 Kilometer Race at Paul Ricard in the south of France is going on for –  the second longest event of the Blancpain GT Endurance Series, behind the classical 24 hours of Spa, which is scheduled for the final weekend of July. A huge challenge for teams and drivers alike – but to succeed you also need a little bit of luck. An experience the GRT Grasser team came to feel the hard way this time, as with even a strong performance, great strategies and a lot of effort there was no reward in the end. “It´s really a shame, as everybody in the team did a really good job”, team principal Gottfried Grasser had to state. “I just have to say thank you to the whole crew, even as we finally had to go home empty handed”.

Andrea Piccini brought car number 19 up to fourth place immediately after starting from P8 in a field of 57 competitors. After changing over to Michele Beretta the team even managed to climb up to second, being involved in some great battles with the later winning McLaren number 58 and the Ferrari number 50, finally ending up runner-up on the podium as well. Things only took a turn for the worse when the Grasser Lamborghini Huracán GT3 got involved in a collision with an already lapped Ferrari. Not only that Luca Stolz, who had taken over the car in the meantime, had to serve a quite controversial drive-through-penalty, as it had been the Ferrari closing the door heavily at the very last moment not really respecting the blue flags. What was even worse was that the car had suffered some technical damage from the crash: “From that moment onwards we felt some strange engine problems”, a rather disappointed Grasser said. After the last pitstop which due to a perfect timing at the beginning of a full course yellow still would have opened up all chances for a podium finish even with all the problems encountered so far, the car refused to restart, even with the starter working perfectly fine. “Something most have gone wrong with the electronics”, Grasser was guessing.

The second car did not see the chequered flag either, even with the huge effort put in by the whole Grasser team, “After a very successful test we came to Paul Ricard with a lot of confidence”, said Swiss driver Rolf Ineichen, who took over the Lamborghini from start driver Jeroen Bleekemolen about two hours into the race. “But during practise and qualifying we never found a proper set-up. Nevertheless we could rise through the field from P15 also due to some clever strategy decisions, after three hours we already lay in P5, only 34 seconds behind the leading car.” Everything seemed to be perfectly on track, “our car was running fine, but then in my next stint I was hit from behind again by a Bentley, just on the right rear wheel”.  The “guilty” competitor could come up with some break problems as an excuse, but that did not help Ineichen and his team mates in any way. “The wheel cover fell apart and then we also had to repair the steering in the pits”. After Mirko Bortolotti had taken over the car for the last part of the six hours, “another problem with a driveshaft occurred, so we had to stop our Lamborghini on track after five hours and 110 laps. A real shame after the great pitstops and perfect preparation by the GRT Grasser Racing Team”.   The Italian was disappointed as well: “It was not our weekend – but this is sometimes part of the racing. After a good start about everything that could go wrong for us did go wrong. But we can only look ahead – up to the next race”.

This is already scheduled next weekend for the GRT Grasser Racing Team: At the Nürburgring valuable points will be on hand again at the Sprint Cup of the Blancpain GT Series. “After falling down, you just have to get up again and continue. We have a lot of work ahead of us, but we have proven a lot of times now that we are really competitive”, Gottfried Grasser gave a positive outlook to the future after the backslash taken in France. “If Lady Luck might be on our side again for once, then another podium will be in reach for sure”.