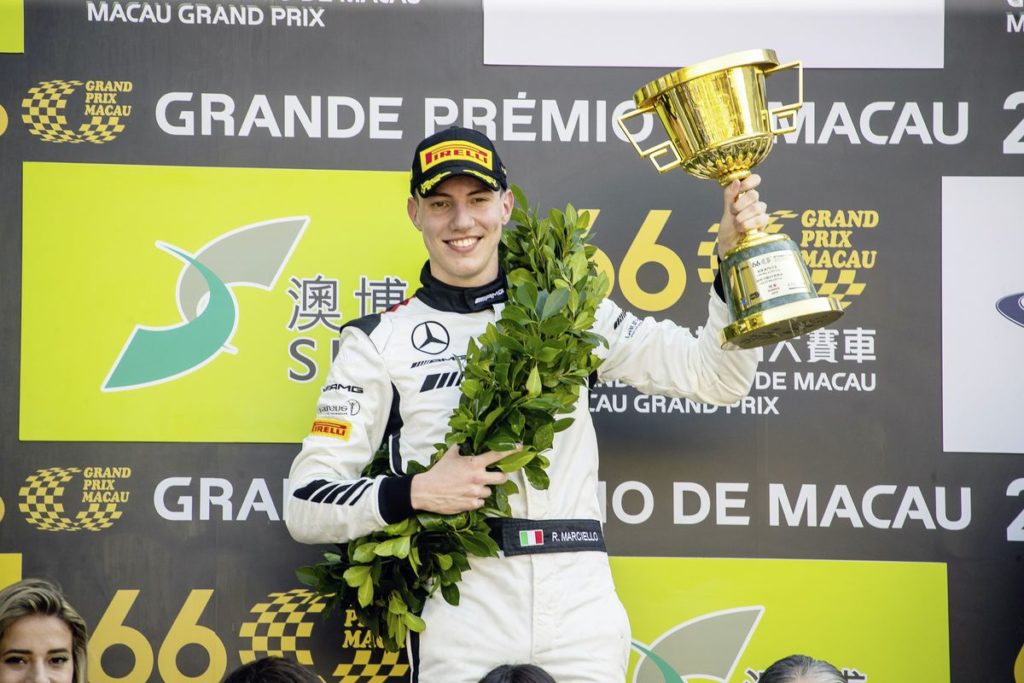 Raffaele Marciello (ITA) is the winner of the 2019 FIA GT World Cup. In the legendary race around the streets of Macau, the Mercedes-AMG driver posted the fastest time in qualifying, won the qualification race and also kept the entire global GT racing elite at bay in the feature race. For the 24-year-old, who raced for Mercedes-AMG Team GruppeM with starting number #999, it is his maiden win at the Macau Grand Prix. For Mercedes-AMG, meanwhile, it is already the fourth victory since 2014. Two further top ten results by Edoardo Mortara (SUI) and Maro Engel (GER) as well as victory in the manufacturers’ classification rounded out the success for the performance and sports car brand from Affalterbach.

Mercedes-AMG Motorsport continues its successful streak in the legendary Macau Grand Prix: the performance and sports car brand from Affalterbach added another victory and the win of the Manufacturers’ Trophy to its three race wins and a total of eight podium results since 2014. Driving the #999 Mercedes-AMG Team GruppeM, Raffaele Marciello was the benchmark in this year’s FIA GT World Cup, putting in a faultless performance throughout the weekend.

In qualifying on Friday, Raffaele Marciello already proved to have strong nerves: Porsche and Audi having dominated proceedings for most of the session, the 24-year-old repeated his performance from the previous year and put in a flying final lap to charge to the fastest time. Thus, the Italian in the #999 Mercedes-AMG Team GruppeM car started from pole position for Saturday’s qualification race. In the action-packed opening part of the race, Marciello masterfully maintained his lead. Driving the #77 car of the Mercedes-AMG Team Craft-Bamboo Racing, Edoardo Mortara also made a promising start from sixth on the grid, moving up to fourth. In the process, he also overtook his fellow Mercedes-AMG driver Maro Engel in the #888 Mercedes-AMG Team GruppeM entry. As the race went on, the two multiple Macau winners pushed to get further up in the field. The fifth lap, however, had drama in store: under braking for the infamous Lisboa corner, Engel was unable to avoid an opponent. As a consequence, he slid into the car of fourth-placed Mortara, leaving both Mercedes-AMG GT3 sidelined from the race. After the restart, hopes for a top result therefore were on Marciello alone, who continued to hold on to his lead also after the safety car intervention, keeping his opponents at bay with a strong performance in the fourth sector in particular. After twelve laps of the Guia Circuit, the 2018 Blancpain GT champion drove victory home and therefore also secured pole position for Sunday’s feature race. 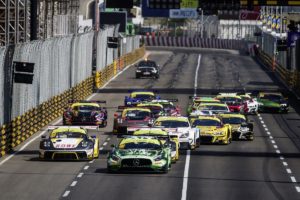 In the main race on Sunday, scheduled for 18 laps, Marciello again succeeded in making a perfect start to maintain his lead. A safety car intervention temporarily brought his opponents again in striking distance, but after the restart, Marciello again defended his position in the lead of the 17 car field with world class drivers and completed lap after lap with impressive precision. On the final lap, however, there was still a heart-stopping moment when a rival touched ‘Lello’ in the #999 Mercedes-AMG Team GruppeM car at the famous Melco hairpin. Once again, Marciello remained unfazed and racked up his maiden FIA GT World Cup victory after 18 laps.

At the tight street circuit, the two former Macau winners Mortara and Engel also showed their class. Following the accident from the previous day, their Mercedes-AMG GT3s were ready to run in time for the feature race. Mortara, however, had to start from 14th place on the grid while Engel only was allowed to join at the back of the field from the pit lane following a post-race penalty. Until the halfway point, Mortara had already worked his way up to sixth place with the #77 Mercedes-AMG GT3 and held on to this position until the finish. Engel’s recovery saw the #888 car move back up to ninth place. Customer Racing Team Solite Indigo Racing also showed a strong performance with Roelof Bruins (NED) behind the wheel of the #97 Mercedes-AMG GT3: the freshly-crowned Blancpain GT World Challenge Asia champion was classified eleventh as the best-placed Silver-rated driver.

Marciello’s victory also meant that one of the two ‘Art Cars’ designed by photographic artist Michael von Hassel made it onto the podium. The #999 and #888 Mercedes-AMG ranked among the most popular photographic subjects for the Grand Prix visitors throughout the weekend.

There was also reason to celebrate in the Greater Bay Area GT Cup that was held at the Guia Circuit a few hours prior to the FIA GT World Cup. Here, Customer Racing Team TRC locked out the first two places with the Mercedes-AMG GT4: local hero Kevin Tse (MAC) won from Philip Kadoorie (HKG). The KRC team driver, Che Wei Kan (TPE), finished the race in sixth place.

Stefan Wendl, head of Mercedes-AMG Customer Racing: “A great performance by Raffaele, who managed to withstand the pressure and dominated proceedings in this world-class field. He was absolutely spot-on all weekend as his pole position reflected already. Too bad, of course, that Edo and Maro were unable to be in contention for victory as well due to the bad fortune in the qualification race. But in Macau, something can happen at any time. Nevertheless, we are really delighted with the outstanding achievements our drivers and teams have shown in this World Cup at Macau. These, of course, also include Roelof Bruins as the best-placed Silver-rated driver and the 1-2 in GT4 by our Customer Racing Team TRC. Now, we are bringing along the winners’ trophies for the FIA GT World Cup for Mercedes-AMG to Affalterbach.”

Raffaele Marciello, Mercedes-AMG Team GruppeM Racing #999: “The start was the key to success, as it was already during yesterday’s qualification race. I knew that when I would manage to stay in front, it would be really difficult for the others to overtake. And that is what happened. I am massively delighted with this win. I have been working for this for a long time and I have shown that I can take it on the world’s top drivers. Many thanks to the entire GruppeM team and to Mercedes-AMG for a perfect car. Tonight, we will have a party!”

Maro Engel, Mercedes-AMG Team GruppeM Racing #888: “First of all, congratulations to Lello. He has done a super job this weekend. I am really happy for him and for the GruppeM team. Fantastic that the Manufacturers’ Trophy is going to Affalterbach. My weekend was anything but straightforward. Having to start from the pit lane in the feature race and then finishing in ninth place is something one can be happy with at Macau.”

Edoardo Mortara, Mercedes-AMG Team Craft-Bamboo Racing #77: “That was a difficult race today. Of course, expectations aren’t really high from 14th place on the grid. Sixth place at the finish was something like a small miracle. On the first laps, we were able to make up many positions, but after that, there wasn’t a lot we could do anymore. All in all, however, it was a good Sunday preceded by a frustrating story from my perspective. But Lello’s victory is what matters. I know for how long he wanted to win here and he really has deserved it.”

* subject to confirmation by the organiser