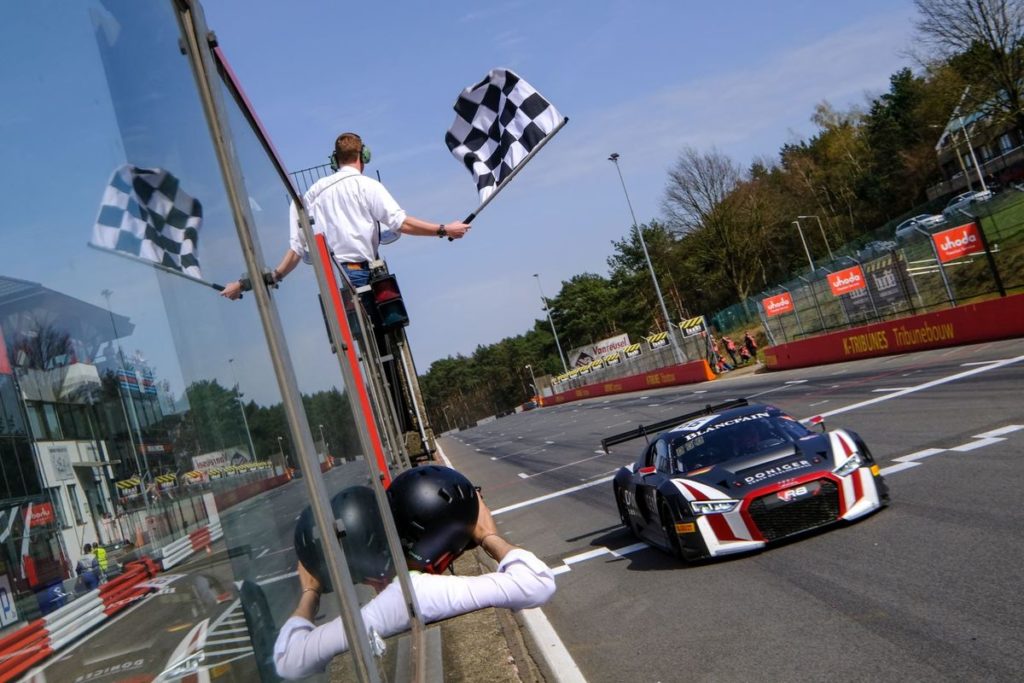 It was a significant win for the #66 crew, with Steijn Schothorst and Kelvin van der Linde clinching Attempto’s maiden series win on their first weekend using Audi machinery.

Initially the result had looked set to be a repeat of Saturday’s opening race. Starting from pole position, Mirko Bortolotti held the lead into turn 1 and went on to deliver a faultless first stint aboard his #63 Grasser Racing Lamborghini Huracan.

There was plenty of action behind the reigning overall champion, as the #66 Attempto car of Van der Linde swept past the #2 Belgian Audi Club Team WRT machine of Will Stevens and into second spot around the first corner.

The South African ace could do nothing about Bortolotti, however, with the #63 Lamborghini building an advantage of almost 8 seconds as the pitstops approached.

But it was here that the race turned on its head. First, the #63 Grasser’s challenge was scuppered by a problem with its seat belts. Christian Engelhart lost a huge chunk of time as he began his stint and surrendered any hope of fighting for a second victory of the weekend.

The #66 Attempto car was unimpeded during its stop, though the #2 Belgian Audi Club Team WRT machine was turned around quicker as Dries Vanthoor took over from Stevens. That handed the #2 Audi the net lead with Schothorst second in the #66.

But further drama was to follow when Vanthoor received a drive-through penalty for leaving the pits in an inappropriate manner. When the young Belgian took his penalty it promoted the #66 Attempto-Audi into the lead.

From this point onwards Schothorst displayed admirable coolness as he remained in control for the remainder of the race. The Dutchman came home almost 7 seconds clear of the field to secure a superb first Blancpain GT Series win for Attempto.

Second spot went to the #88 AKKA ASP Mercedes-AMG shared by Raffaele Marciello and Michael Meadows. The Italian made quick progress at the start and looked capable of overhauling the #2 during his stint, then handed over to Meadows for the second half of the race.

The British driver couldn’t challenge Schothorst for the win, but the runner-up position represented a strong conclusion to the Zolder weekend for the #88 pairing.

The podium was completed by the #19 Grasser Racing Lamborghini Huracan of Andrea Caldarelli and Ezequiel Perez Companc. They had started the event in ninth, but a strong start by Caldarelli saw the Italian climb to sixth, then dispossess the #39 TP 12-Kessel Racing Ferrari of Carlo van Dam for fifth spot.

Perez Companc took over and was able to move up to P3 thanks to the problems for the sister Grasser-Lamborghini and the #2 Belgian Audi Club Team WRT. The Argentine driver did well to manage a tyre problem during his stint and bring the car home in third.

Ultimately the #63 Grasser-Lamborghini took eighth place at the chequered flag, despite a penalty for a pitstop infringement, salvaging crucial championship points on a disappointing day. There was less comfort for the #2 Belgian Audi Club Team WRT pair. They took a second penalty when Vanthoor forced the #25 Sainteloc Racing Mercedes-AMG off the track, and subsequently finished 12th.

Silver Cup victory went to the #3 Belgian Audi Club Team WRT entry of youngsters Gilles Magnus and Alessio Picariello, who completed a class sweep for the weekend with another mature drive to sixth overall.

The #39 TP 12-Kessel Racing Ferrari 488 also swept its class for the weekend. Van Dam ran with the front-runners during the early stages before handing over to Piti Bhirombhakdi. The Thai driver once again delivered a strong performance to finish well clear of his nearest Pro-Am challenger.

The Blancpain GT Series now moves on to Monza, where the opening Endurance Cup race of the 2018 season will take place on 20-22 April.

Steijn Schothorst, #66 Attempto Racing Audi R8 LMS: “Kelvin did a great job at the start by getting ahead of Will for P2 and then drove a very strong stint. There was not much in front of me or behind me during my stint, so I was able to focus on my own race and bring it home for the win. It’s a great way to start the season – I couldn’t have wished for much more!”

Raffaele Marciello, #88 AKKA ASP Mercedes-AMG: “I was stuck behind Will during my stint. It’s tricky to overtake around here but I tried to stay as close as possible and keep up the pressure. We lost a little time in the pits so that is something we can improve on going into my home race at Monza.”

Andrea Caldarelli, #19 Grasser Racing Lamborghini Huracan: “It was a really good first lap for me, going from P9 to P6. I spent a little too much time behind the #39 Ferrari and lost time to the guys at the front. We started this weekend with some problems on the car, so I think we can consider this a very positive result. The team did a great job with the pitstop so I’m very happy today.”

Piti Bhirombhakdi, #39 TP 12-Kessel Racing Ferrari 488: “This has been one of my best weekends in racing. The first few laps were fine but after that I struggled for traction. The team did well but we still have some work to do on setup. It was quite tough today, but we’re happy with the result we got in the end.”

Gilles Magnus, #3 Belgian Audi Club Team WRT Audi R8 LMS: “First of all, thanks to Team WRT for this opportunity – it’s a dream come true. P6 and P7 overall are really good results for my first time racing in GT3 and to win twice in the Silver Cup is incredible. It’s an amazing team so it would be great if I could do more with them during the season. Nothing is decided yet, so let’s see.”