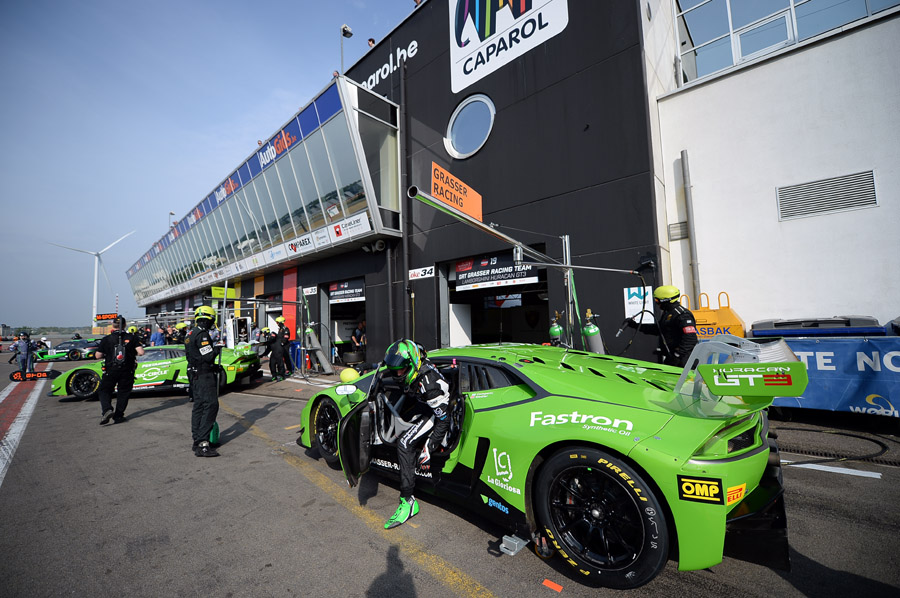 Even being hit by quite a big amount of bad luck, there were still some positive aspects to be taken from the outcome of the sprint race of the Blancpain-GT-Series at Zolder/Belgium for GRT Grasser Racing: While the series of victories claimed over the past few weeks did not continue this time, the Austrian squad managed to defend their Championship lead and scored points with their second car even after a not perfect qualifying.

Nevertheless, a lot more would have been possible, hadn´t Mirko Bortolotti in car number 63 been pushed off the track immediately in the qualifying race, after starting from P5 on the grid. “I actually had quite a good start and was already side by side with the Mercedes, when suddenly on the straight I was hit from the other side – and out I was,” the Italian reported. Come Ledogar in the McLaren seemed to be the obvious villain, but team principal Gottfried Grasser tried to keep an objective perspective: “The hit was really unlucky for us, our weekend was actually over from that moment onwards. A real pity, otherwise I think we could have made the podium again. It´s always difficult to blame one driver one hundred percent for an incident like this. It was a critical situation with a few people involved. And we, where in the middle of it with our car – while for sure being the least responsible for the mess.”

So car number 63 had to start the main race from the very end of the grid: “Which meant that we had to do a lot of catch-up, but unfortunately it was just not enough to get into the points”, said Christian Engelhart. “For sure a lot more would have been possible without Mirko´s bad luck on Saturday.” In the end it was P15, “a pity, as our guys performed really great pit stops over the whole weekend.”

So this time it was Norbert Siedler´s and Ezequiel Perez-Companc´s turn to score for GRT. And so they did in their Lamborghini Huracán number 19, even after qualifying did not go well at all for Siedler: “At the end of Q2 there was a Red Flag, so I could not improve and we missed Q3, had to start from P27.“ But in the qualifying race things clearly turned for the better: “At the beginning of the pit stop window I was already in P17, and a very fast pit stop made our car jump the order up to P8, with Ezequiel than even managing to cross the finish line in seventh position. Really a great performance from him as well.” In the main race the Argentinian did not have a good start and dropped back to P15, but even with overtaking being a really difficult task at Zolder, Siedler in the end finished in P10: “In general we can be really happy with our results after the bad luck in qualifying. But definitely a lot more would have been possible with a better grid position. Our pace was good, but quite often I got stuck in traffic.”

Team principal Grasser was also content: “Qualifying was not really perfect for Norbert, but then to climb up from P27 to P7 is something very special. What a great performance from both of them! In the main race Ezequiel ended up in a rather unfavourable situation during the start and as a result lost eight positions. But in the end they came home in P10 and scored points, so it was a good weekend after all. In general we were lucky at Zolder as our main opposition also hit some troubles and could not make up too much ground. At least we are still leading the Team and Drivers Championship. But all this bad luck really has to end now, it´s been enough!”