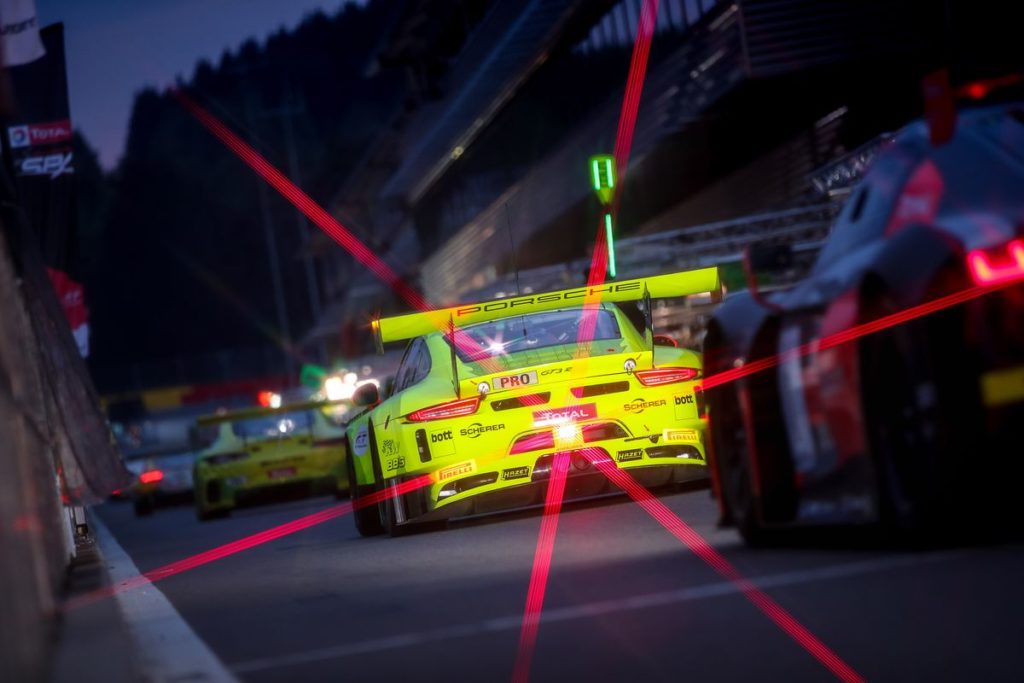 Five Porsche 911 GT3 R racers will tackle the Suzuka 10 Hours on 26 August. For the first time, the 47th running of the Summer Endurance Race on Japan’s Grand Prix circuit counts towards the Intercontinental GT Challenge. Manthey-Racing, Craft-Bamboo Racing and Black Swan Racing will each field one 911 GT3 R, with D’station Racing campaigning two vehicles. All four Porsche customer teams receive support from works drivers and engineers from Weissach at the endurance highlight in Asia. Seven works drivers and one Porsche Young Professional share driving duties in the ca. 500-hp vehicles. Currently, 35 race cars are entered for the race on the 5.807-kilometre Suzuka Circuit. The field is made up predominantly of vehicles that comply with FIA GT3 regulations and cars from the GT300 class of the Japanese Super GT Series.

The race New on the 2018 calendar, the Suzuka 10 Hours marks round three of the Intercontinental GT Challenge. The first edition of the race was held here in 1966. This year’s race will be contested over ten hours instead of the previous 1,000 kilometres as support to the Super GT. Last season, around 45,000 spectators witnessed the Summer Endurance Race on the high-speed circuit in the Mie Prefecture.

The Porsche drivers Just like at the 24 Hours of Spa, the regular Blancpain GT Series Endurance Cup factory drivers Romain Dumas, Frédéric Makowiecki (both France) and Dirk Werner (Germany) will tackle the race for Manthey-Racing. Also contesting the Pro class for professional drivers are Laurens Vanthoor (Belgium), Kévin Estre and Porsche Young Professional Mathieu Jaminet (both France). The trio share the cockpit of the 911 GT3 R fielded by Craft-Bamboo Racing, which also took on the season-opening race at Bathurst, Australia. In the Pro car fielded by D’station Racing, Earl Bamber (New Zealand) joins forces with local hero Tomonobu Fujii as well as his works driver colleague Sven Müller (Germany), who is contesting his second complete Super GT seasons for the Japanese customer team this year.

The Porsche 911 GT3 R The 911 GT3 R was designed by Porsche for worldwide GT3 series. Mounted with the ultra-modern, four-litre flat-six engine with direct fuel injection, the 368 kW (500 hp) customer sports racer celebrated its race debut in January 2016 at the Daytona 24-hour race. Since then, the car has notched up victories in numerous international racing series, for example in the IMSA SportsCar Championship, the World Challenge, the ADAC GT Masters, and at the 24-hour race on the Nürburgring.

The schedule The Suzuka 10 Hours takes off on Sunday, 26 August, at 10:00 hrs local time (03:00 hrs CEST) and can be viewed live on the website of the Intercontinental GT Challenge at www.intercontinentalgtchallenge.com.

Pre-race comments Dr Frank-Steffen Walliser (Vice President Motorsport and GT Cars): “The first two races of the season at Bathurst and Spa have underlined the high level of competition in the Intercontinental GT Challenge. And the entry list for Suzuka suggests that this race will also be hotly-contested. Motor racing in Japan is always something exotic, and this thrilling event won’t be any different. Hence, this gave us even more motivation to prepare for Suzuka with our customer teams. At Spa we once again showed that long distance races in particular are our forte – and that can be expected again this time. The fact that a round in Africa will be added to the 2019 Intercontinental GT Challenge calendar, which will then encompass all five continents, highlights the value of the series.”

Sebastian Golz (Project Manager 911 GT3 R): “We face a big challenge at Suzuka: Only very few drivers in our squad have experience on this track. Still, we need to quickly get to grips during practice sessions in order to work out a setup that’s fast but not overly aggressive. That is critical, because the high temperatures in the region put the focus on tyre management. However, all of our drivers have the necessary skills to cope with this task. Moreover, lively exchanges with and between our customer squads will help us to be well prepared for this long race.”

Romain Dumas (Porsche 911 GT3 R #911): “Suzuka is a circuit to my liking. It’s extremely fast and requires a good rhythm. Only the chicane is rather tight and slow, however this could be a good place for our Porsche to overtake during the race. With the rear engine, we should be able to brake late there and be early on the throttle. In 2002, I won the race at Suzuka in the former N-GT class with a 911.”

Frédéric Makowiecki (Porsche 911 GT3 R #911): “Having spent two years contesting the Super GT Series it’s rather special for me to return to Japan – especially after clinching a victory at the 2013 Summer Endurance Race. I have great memories of Japan and Suzuka: The fans are fantastic and the circuit is breathtaking. The fast corners are mercilessly unforgiving. It’s a real old-school racetrack that is among the world’s best.”

Dirk Werner (Porsche 911 GT3 R #911): “I’ve never been to Japan and I’m very much looking forward to the challenge of Suzuka. I’ve never driven here and I hope I can quickly familiarise myself with the circuit. If we have a little more luck than we did at Spa, then Suzuka could be a highlight for us – that’s what our performance at the 24-hour race in Belgium indicated.”

Laurens Vanthoor (Porsche 911 GT3 R #991): “Originally I didn’t want to contest more than 20 races this season, but then I was asked if I’d like to race at Suzuka. Of course I couldn’t resist. I’ve never been to Japan, but I always hear how friendly and respectful the people are there and how enthusiastic they are about motor racing. I’m really excited for this new experience.”

Kévin Estre (Porsche 911 GT3 R #991): “I saw Suzuka on TV as a child and I always wanted to travel there. This racetrack simply impressed me. And after I visited Japan last year for the Fuji round of the WEC, I’m even more impressed. The Japanese culture and the Japanese themselves are really great. The fans are avid motor racing enthusiasts, they make crazy papier-mâché hats, they wave their flags and flock to all the autograph sessions.”

Mathieu Jaminet (Porsche 911 GT3 R #991): “I’m looking forward to my race debut in Asia and in the Intercontinental GT Challenge. Since I already got a chance to test with Craft-Bamboo Racing in Suzuka, I’m sure we can head into the race weekend feeling optimistic. The team is well prepared and we have a strong driver lineup. Still, we’ll have to wait and see how well we come to terms with the conditions: It’ll be extremely hot and that will put a lot of stress on the tyres.”

Earl Bamber (Porsche 911 GT3 R #7): “I’ve driven Suzuka often with a game console, but never in reality. I’m looking forward to competing for the D’station team; the squad is very popular in Asia. Having Sven Müller now as a teammate after our time as rivals in the Porsche Mobil 1 Supercup will be another cool experience.”

Sven Müller (Porsche 911 GT3 R #7): “Suzuka with its extremely fast corners is one of my favourite racetracks. Since I also contest the Super GT for D’station Racing, I know the team well. The squad is in a good position to take on the strong opposition. It’s also great to share a car with Earl. We’ve both raced for various teams at Le Mans and prior to that in the Porsche Mobil 1 Supercup. It’ll be an exciting race weekend.”

This is the Intercontinental GT Challenge The Intercontinental GT Challenge is the world’s first racing series, in which vehicles complying with the FIA GT3 regulations make up the top class. The series was founded in 2016 by the SRO Motorsports Group under Stéphane Ratel. Rather than field a factory squad, Porsche supports international customer teams in their campaign with the 911 GT3 R by providing works drivers and engineers from Weissach. For each race, a maximum of four vehicles selected by the manufacturer are entitled to earn points. Of these, the two best-placed vehicles at the end of the race are awarded points for the manufacturer’s overall classification. In the driver’s category, however, the drivers of all cars nominated by manufacturers are eligible for points.