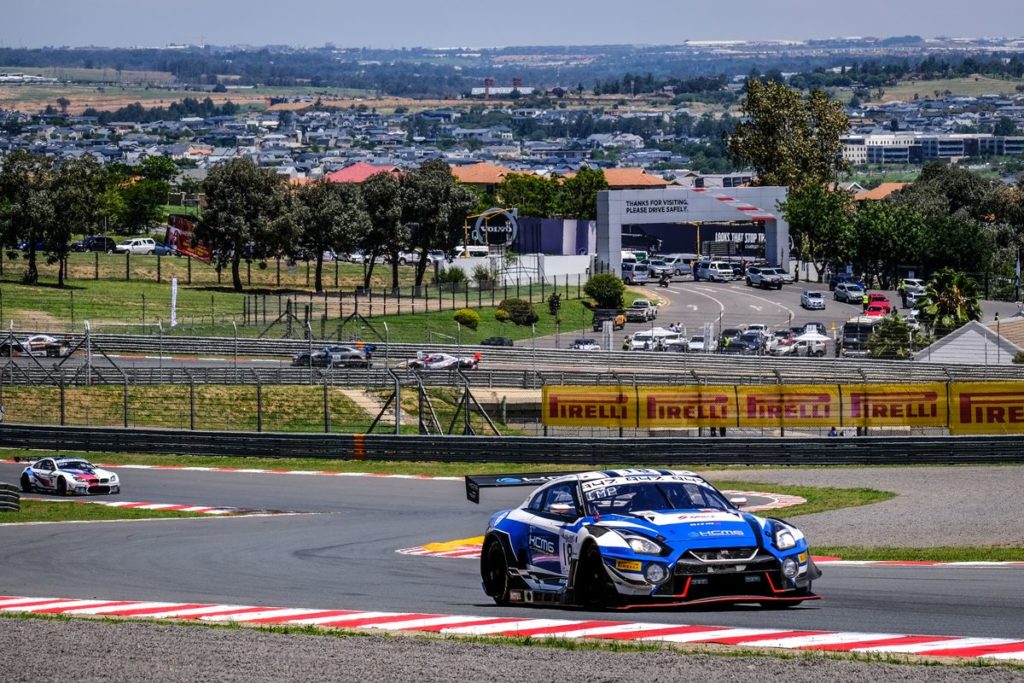 KCMG enjoyed a strong start to the weekend, with the #18 Nissan going eighth quickest in Night Practice and the #35 making the top-five in pre-qualifying, as the drivers got to grips with the former Grand Prix venue.

The GT-R’s potential was then confirmed during qualifying, as Burdon, Chiyo and de Oliveira combined to go quickest in the wet-dry session, putting them into the pole shootout. The trio managed ninth fastest, with the sister car lining up alongside in 10th.

Taking up the start for the first Kyalami 9 Hour since 1972, de Oliveira and Imperatori made up a number of places, climbing to sixth and eighth respectively with the Brazilian challenging the top five before the first driver changes got underway.

With Chiyo on board the #35 Nissan, both KCMG cars remained in the top 10 fight, with the Japanese ace rising to fourth before making way for Burdon. Meanwhile, Liberati stayed out longer and was able to capitalise from the full course yellow period and allow Jarvis to emerge just behind his Australian team-mate in ninth.

Jarvis enjoyed a strong run in the #18 machine and was up to second before the team pitted him under an FCY to minimise time lost. The strategic call allowed Imperatori to retain fourth as night fell over the 4.522 km circuit.

A torrential downpour then brought out a two-hour safety car period, with the #18 Nissan just outside the top five as Jarvis took the restart for the final 25-minute dash to the line. The 2017 Le Mans 24 Hours LMP2 winner came home in sixth to equal KCMG’s best IGTC result, with de Oliveira pulling over to retire the #35 car in the final 10 minutes with a fuel pump issue.

That marks the end of KCMG’s 2019 Intercontinental GT Challenge campaign, with the squad helping Nissan finish sixth in the manufacturers’ standings.

Edoardo Liberati, #18 Nissan GT-R NISMO GT3: « I’m satisfied to finish the season on a high in Kyalami. We ran between second and sixth throughout the race, with a strong pace and a solid strategy. Big thanks to every single member of KCMG for the tremendous effort spent in the 2019 Intercontinental GT Challenge campaign and to my team-mates. I’m looking forward to seeing what’s next! »

Alexandre Imperatori, #18 Nissan GT-R NISMO GT3: « We had a good clean race with a strong strategy and were running in the top four before the rain came. Unfortunately, we got caught out by a last-minute rule change at the final stop, when we switched to wets and lost positions in the pits. Nevertheless, we managed to equal our best result of the season with sixth in difficult conditions at the end. I’d like to thank everyone at KCMG and my team-mates Oliver and Edoardo for a flawless job all year long and for all the hard work. We are now looking forward to the next challenge and excited about what’s coming. »

Oliver Jarvis, #18 Nissan GT-R NISMO GT3: « This was a really strong performance from the team in the last race of the season. Sixth doesn’t fully represent how competitive we were throughout the race and we were definitely looking good for a podium until the unfortunate timing of the rain in the last few hours. Big thanks to all of KCMG for their professionalism and making it a really enjoyable season. »

Joshua Burdon, #35 Nissan GT-R NISMO GT3: « It’s not the result we wanted in Kyalami after qualifying on provisional pole for the shootout. It was a difficult race strategy-wise and the weather ultimately didn’t play into our hands. Nevertheless, I am very proud of our team for what we have accomplished this weekend and season. We are getting stronger every race. I can’t wait for 2020. »

João Paulo de Oliveira, #35 Nissan GT-R NISMO GT3: « I was very happy to join KCMG in Kyalami. There were some really positive aspects of the weekend and going quickest before the shootout was the highlight – we definitely could show our performance there. We had strong pace all weekend, but unfortunately in the race we had some issues with the air conditioning and cool suit, as well as the drinks system that didn’t allow me to double stint. It compromised our strategy and we couldn’t fight at the front, before retiring with a separate issue in the final 10 minutes. I saw a lot of potential and there are many positives to take away. »

Katsumasa Chiyo, #35 Nissan GT-R NISMO GT3: « We had a number of misfortunes, such as the timing of the pit stops, but both cars performed well. We had some more bad luck and the car stopped 10 minutes before the finish. It was a disappointing end to the season, but I’d like to thank everyone in the team for doing such a great job all year. The Intercontinental GT Challenge has some of the best drivers and manufacturers in the world and it has been a pleasure to be part of it. I’m looking forward to racing again in this championship in the future. »

Paul Ip, KCMG Founder: « It was a great performance from the whole team to end the 2019 Intercontinental GT Challenge season. Although it wasn’t the result we were looking for, both cars were capable of challenging for podiums, but we had some bad luck with the timing of safety cars, weather and caution periods. Overall this year the Nissan GT-R NISMO GT3 has been very quick and it was an incredible effort by the team at each round. »