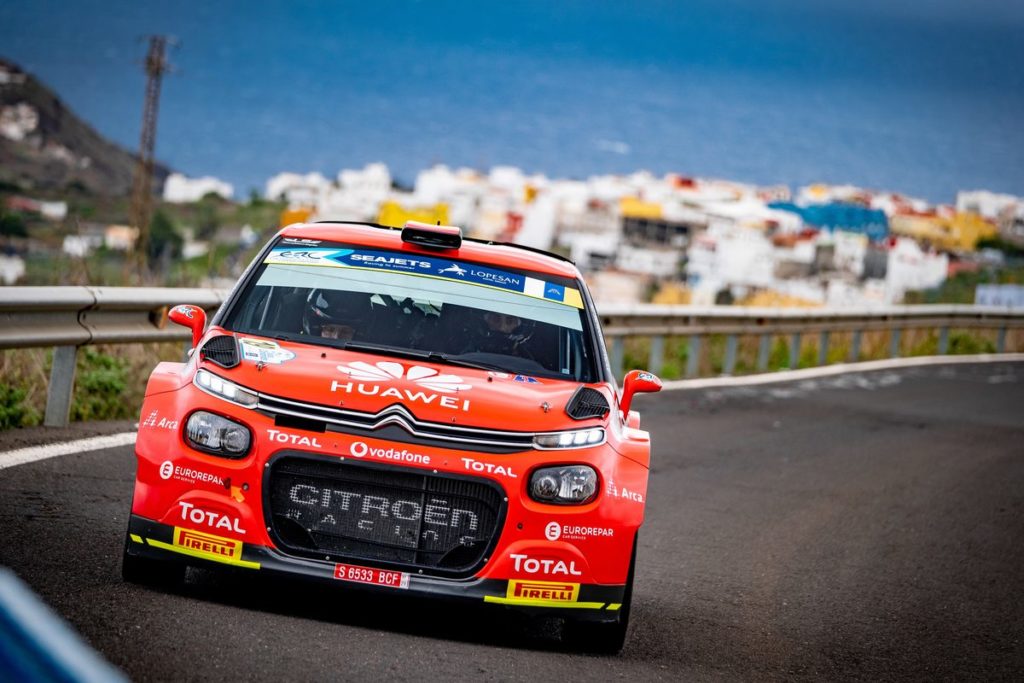 Alexey Lukyanuk and Alexey Arnautov, the Russian #C3R5Family crew secured a first European Rally Championship title for the C3 R5 at the final round of the season in the Canaries. Yoann Bonato and Benjamin Boulloud also claimed a fine second place in the C3 R5, whilst Pepe Lopez and Borja Rozada wrapped up their second consecutive titles as Spanish rally champions and super champions in a Citroën.

Rally Islas Canarias played host to a huge contingent from the #C3R5Family on the island of Gran Canaria at the final round of the ERC, with no fewer than nine C3 R5s entered for Lukyanuk-Arnautov, Bonato-Boulloud, Lopez-Rozada, Llarena-Fernandez, Tempestini-Itu, Griebel-Winklhofer, Monzon-Deniz, Falcon-Carrera and Amourette-Gaudin. Usually held in May, the character of the event was completely transformed, with highly changeable weather conditions throughout the rally, meaning tyre choice suddenly became a decisive factor.

The #C3R5Family once again proved to be quite adept at managing these testing circumstances. Armed with a clear points advantage at the start, Alexey Lukyanuk and Alexey Arnautov produced a measured, intelligent performance in the extremely difficult conditions, whilst nonetheless winning three stages. They finished seventh overall to wrap up a second European title for the C3 R5 Saintéloc Racing crew, following their win in 2018. Their title was just reward for a strong season, with two wins at Rally Di Roma Capitale and Rally Fafe Montelgono and a third place at Rally Liepaja, behind the sister car of Mads Østberg, in just five rounds.

After finishing as runners-up at Fafe in the ERC earlier this year, Yoann Bonato and Benjamin Boulloud – who recently won their third French Rally Championship – also did the #C3R5Family proud in taking a fine second place, winning two stages in the process.

The performance of the #C3R5Family was rounded off in style as Pepe Lopez and Borja Rozadaby claimed the titles of Spanish champions (tarmac championship) and Spanish super champions (combined tarmac and gravel championship) for the second year running. Caught out on SS1, the winners of the 2019 Rally Isla Canarias refused to be discouraged and managed to claim what proved to be a decisive stage win on the final test. An emotional last race brought their 2020 campaign to a conclusion, one in which they won two rounds in each of the championships

Didier Clément, Head of Customer Racing, Citroën Racing : “It’s a genuine clean sweep for Citroën Racing this weekend! We can really be very proud of this season in the ERC. One of our targets for the year was to win the title. Alexey Lukyanuk spearheaded our efforts this year and has had a fantastic season, fighting at the front at pretty much every round. Yoann Bonato also strengthened our line-up at the last three rounds. With two podiums in three races, he confirmed he is a major player at this level whilst equally demonstrating the obvious competitiveness of the C3 R5. The numbers don’t lie either: we had no fewer than nine crews taking part in this round in the car. We also won the lot in the Spanish championship thanks to the two titles for Pepe Lopez and Borja Rozada. Lastly, hats off to Rally Team Spain, who won the European Rally Championship Teams’ title.”

Alexey Lukyanuk, European rally champion with the C3 R5 : “To be honest, I feel a bit drained emotionally after this rally, which was hard on my nerves. I wasn’t always totally happy with my performance this weekend, but I’m delighted by the final result. None of this would have been possible without the support of Citroën Racing and my team, Saintéloc Racing. We had a C3 R5 that was exceptionally reliable, without any issues at all, and that proved decisive. Our entire package worked perfectly. We were quick, consistent, fighting with younger drivers who were pushing hard. But we also managed to use our experience when it was necessary. It’s time to celebrate now!”

Vincent Ducher, Team Manager, Saintéloc Racing : “The season started late, of course, but thanks to everyone’s commitment and persistence, the events were held and we won the first rally, which is often a good sign. Alexey has made a lot of progress this year, on many levels, and this weekend he got the job done despite the difficult weather conditions. He fully deserves his title. The whole team is very proud of him. It is just reward for the hard work everyone has put in, and the trust placed in him by Citroën Racing and our loyal partners.”

Yoann Bonato, runner-up at Rally Islas Canarias with the C3 R5 : “For us, obviously it’s a good result, on top of the one we enjoyed in Portugal. It was a really difficult rally and very competitive. We didn’t know exactly where we would end up compared to the others, although we secretly hoped we could finish on the podium. It’s the end of what has been a good season for our team, with us also winning the French championship.”

Pepe Lopez, Spanish rally champion and super champion with the C3 R5 : “Once again, it’s been a fantastic season for us! It wouldn’t have been possible had it not been for the incredible efforts of my super team, or for the C3 R5, which proved to be the best car possible once again! We have enjoyed a lot of happiness and success over the last two years and we hope to keep doing the same thing in 2021. Thank you to everyone for their support!”

Jose Vincente Medina, Team Principal, Rally Team Spain : “We are very happy to be working with Citroën Racing, a brand that needs no further introduction in the world of rallying, and with very talented young drivers like Efren Llarena and Pepe Lopez, because our approach has paid off. Efren’s recent third place at Rally Hungary underlined that he is a force to be reckoned with, and Pepe showed great persistence this weekend. He never gave up despite a tough start to the rally, and ended it by deservedly winning both titles again. We’re absolutely delighted with this result!”