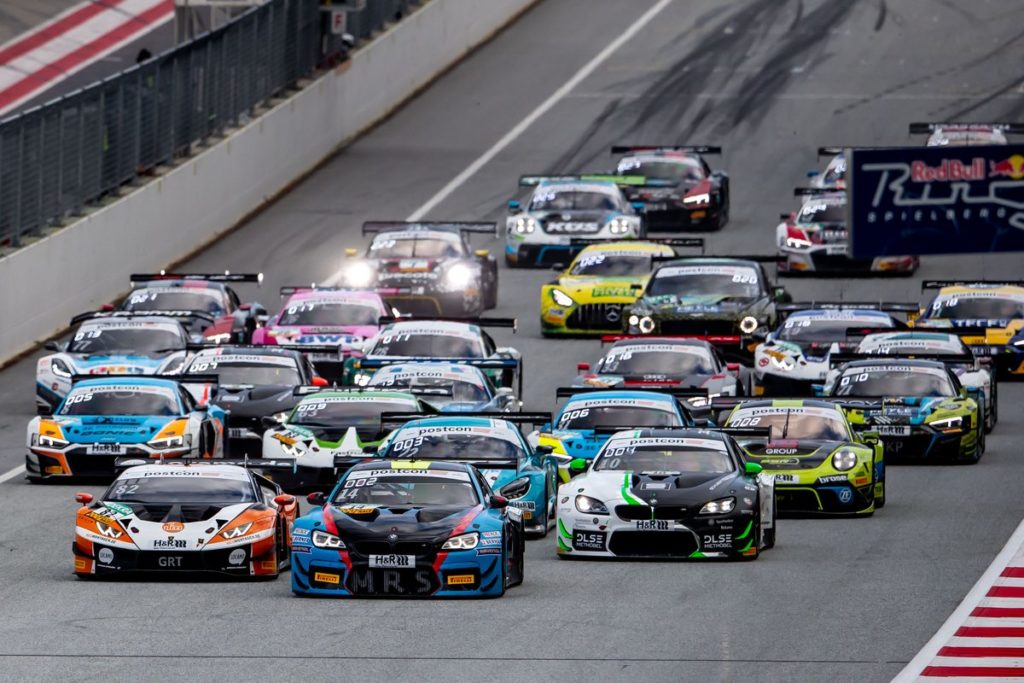 Erik Johansson (24, SWE) and Jens Klingmann (30, GER, both MRS GT-Racing) have gone down in ADAC GT Masters history as winners of the 200th race. Victory for the BMW duo on Sunday at the Red Bull Ring means that the Super Sports Car League has now seen nine different winners in the ten outings of the current campaign. Runners-up were Luca Stolz (25, GER) and Maro Engel (35, Monte Carlo, both Toksport WRT) in a Mercedes-AMG, with third place going to Lamborghini works drivers Franck Perera (36, FRA) and Albert Costa Balboa (30, ESP, both GRT Grasser Racing Team). “Amazing!” was race winner Jens Klingmann’s verdict at the finish. “To have won the 200th race of the ADAC GT Masters is really something very special. After this morning’s quali, I certainly wasn’t expecting the win – I would have been satisfied with just a podium.”

Jens Klingmann took the opening stint in the BMW and showed his determination to win on the first lap. From second place on the grid, he overtook pole-sitter Tim Zimmermann (24, GER, GRT Grasser Racing Team) in the Lamborghini and went into P1. Following close behind were fellow BMW driver, Nick Yelloly (29, GB, Schubert Motorsport) and Michael Ammermüller in a Porsche. Zimmermann had dropped down to ninth by the end of the first lap. After a short safety car deployment to recover the stricken Bentley of Jordan Pepper (24, ZA, T3-HRT-Motorsport), Klingmann maintained the lead until the time came to change places with team-mate Johansson. The Swedish Junior kept his composure to bring the BMW home in first place and secure a maiden victory in the Super Sports Cars League. He also won the Pirelli Junior classification for the first time. As for team-mate Klingmann, this was his tenth victory in the ADAC GT Masters and MRS GT-Racing’s third.

The BMW driven by Saturday’s winning crew, Yelloly and Henric Skoog (24, SWE), crossed the finish line in second place but was subsequently demoted to fifth with a ten-second penalty for repeatedly exceeding track limits. As a result, second place went to Luca Stolz und Maro Engel in the best-placed of the Mercedes-AMG contingent. The two Toksport WRT drivers had been running sixth for most of the first stint but gained quite a few positions with a well-timed, early pit stop. Unlike yesterday when they just missed out on the Top Three, the two Lamborghini works drivers Franck Perera (36, FRA) and Albert Costa Balboa (30, ESP, both GRT Grasser Racing Team) this time made it into the Top Three. Ending up in P4 were Christian Engelhart (33, GER) and Michael Ammermüller (34, GER). The two Germans were originally second, but some time after the second race finished, the sports commissioners of the DMSB upheld a complaint against the number 92 SSR Performance-Porsche for having left the track on the starting lap. Engelhart and Ammermüller were handed a retrospective five-second time penalty and were classified fourth. SSR Performance have given notice of intent to appeal against the decision. The result of the Sunday race at the Red Bull Ring is therefore provisional.

Max Hofer (21, AUT) and Christopher Haase (33, GER, both Montaplast by Land Motorsport) in the best-placed Audi booked P6 behind the likewise penalised Yelolly and Skoog, now in fifth following their retrospective time penalty. Maximilian Hackländer (30, GER) and Nikolaj Rogivue (24, CH, both Aust Motorsport) came next after a strong race, during which they fought their way up from 21st on the grid to seventh. Hackländer also set the fastest lap of the race. To their rear, Patric Niederhauser (29, CH) and Kelvin van der Linde (24, ZA, both Rutronik Racing), who had led the championship standings up until this point, crossed the finish line in another Audi R8 LMS. Steijn Schothorst (26, NL) partnering pole-sitter Tim Zimmermann (24, GER, both GRT Grasser Racing Team) and the Mercedes-AMG pairing of Philip Ellis (28, GB) and Raffaele Marciello (25, ITA, both Knaus-Team HTP-Winward) rounded off the Top Ten.

Jens Klingmann (BMW M6 GT3): “I have contested more than half of all ADAC GT Masters races in recent years, so it is obviously a very special achievement to have won the 200th race. Our best chance was to pass the Lamborghini pole-sitter right at the start of the race and manage the pace as cleverly as possible from there on. Thanks to a great start, the strategy worked out well. I was able to look after the tyres effectively, so that we went into the second stint well prepared. During the second half, I was much more nervous as a spectator than I had been in the car. As for the remaining races of the season, we’re hoping to carry forward the momentum and deliver a few more star performances.”

Erik Johansson (MRS GT-Racing, BMW M6 GT3): “It is a fantastic feeling to be celebrating my first victory in the ADAC GT Masters, especially with this being the 200th race of the series. Jens did an outstanding job in the first stint. It was a big advantage to be taking over the car at halftime in first position. My main task was to drive as safely as possible and not to make any mistakes that might have cost us a lot of time. It’s a pity not to see two BMWs on the podium again, but our car felt very good again today. Two podiums for MRS GT-Racing are a great result. That really boosts your self-confidence.”

0 0 0 0 0
Previous : High four at Zolder: Rast ahead of Müller, ultimate DTM showdown at Hockenheim
Next : Victory, the second: Audi driver Mauron with a pair of wins in DTM Trophy