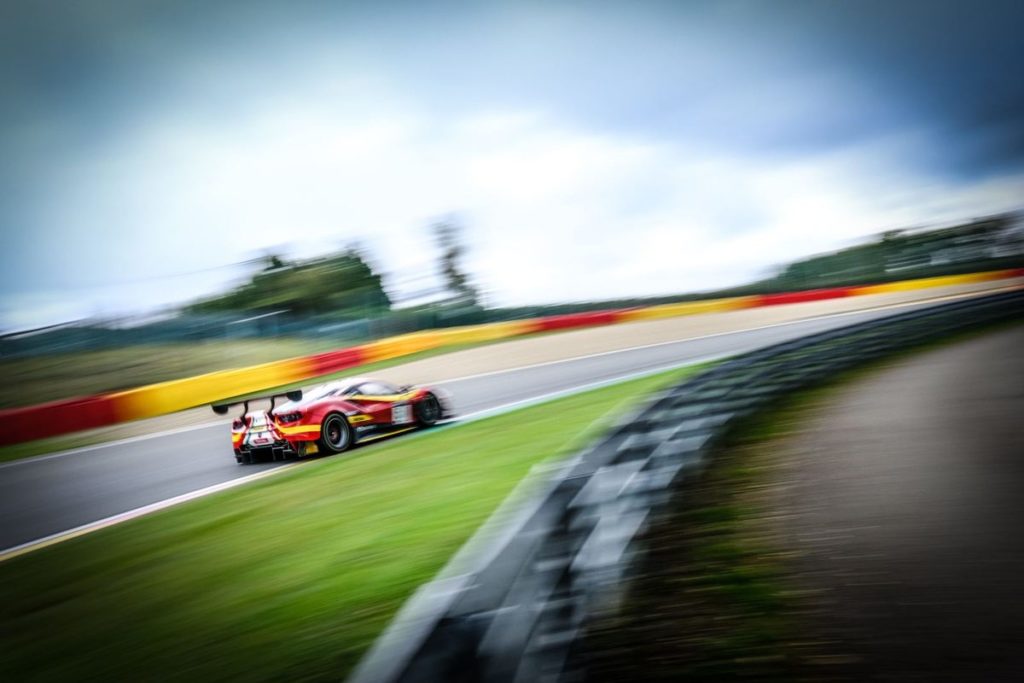 The Sprint Cup season is complete. The test days have been run. It’s just about time to head to the Ardennes for the biggest GT3 race on the planet. Which raises one very important question: who is the favourite to take victory at the Total 24 Hours of Spa?

From a 56-strong grid, 28 full-pro crews will be gunning for overall glory in the Ardennes, the vast majority featuring factory drivers from the world’s biggest brands. The teams are the best in the business, and many will get extra support from their manufacturers.

With so much talent spread throughout the field, there is no one that would be considered a shock winner. Some may be more fancied than others based on the experience of the team and its drivers, but there is no genuine outsider. Should they execute perfectly and circumstances work in their favour, any of the 28 have the potential to win this race.

As such, picking a favourite is impossible. In fact, it is difficult to narrow the list down to five or even 10 crews. All that we can do is assess this year’s entrants and get an idea of who will be in the fight come Sunday afternoon.

As last year’s winning brand, Porsche is the natural place to start. GPX Racing ended a nine-year wait for victory, but the German manufacturer clearly has even bigger ambitions in 2020. Eight full-pro crews – more than any other brand – confirms as much.

They are led by last year’s winning trio of Kevin Estre, Richard Lietz and Michael Christensen, who move to Paul Ip’s KCMG operation. Experience alone makes them the favourites among Porsche’s representative, but the opposition is stiff. Dinamic Motorsport scored a dominant victory in last month’s GT World Challenge Europe Powered by AWS Endurance Cup race at the Nürburgring, while the #98 ROWE Racing crew of Nick Tandy, Laurens Vanthoor and Earl Bamber also looks set to be a factor.

Add in another strong ROWE car, two excellent GPX crews and a one-off entry by Frikadelli Racing and it becomes clear just how stacked Porsche’s line-up is. Don’t bet against another triumph in 2020.

After a relatively fallow 2019 the current season is looking very bright indeed for Audi. The Ingolstadt marque has pulled out all the stops in its pursuit of a fifth Spa win in 10 years, with four factory-supported cars contending for overall victory.

The #30 Audi Sport Team WRT entry is the pick of the bunch, with Endurance Cup leaders Mirko Bortolotti and Kelvin van der Linde joined by two-time Spa winner Rene Rast. The sister #31 of Chris Mies, Robin Frijns and Dries Vanthoor is also a major threat for victory this year.

Audi Sport Team Sainteloc counts on a pair of past winners in Markus Winkelhock and Christopher Haase, who are partnered by DTM championship leader Nico Müller. There’s also bags of talent at Audi Sport Team Attempto, a new addition to the factory fold that features Fred Vervisch, Mattia Drudi and Patric Niederhauser.

Mercedes-AMG celebrates the 10th anniversary of its customer racing programme this year and will have two factory-backed cars hunting its first win since 2013.

The #4 Mercedes-AMG Team HRT crew is among the favourites. Last term, in its previous guise as Black Falcon, the squad took overall pole and finished on the podium. This year it retains the established pairing of Maro Engel and Luca Stolz alongside Vince Abril, a runner-up at Spa in 2017 with Bentley. Now under the stewardship of Hubert Haupt, this squad should be a contender again in 2020.

Mercedes-AMG Team AKKA ASP also looks strong, with Raffaele Marciello, Felipe Fraga and Timur Boguslavskiy showing well at Imola and the Nürburgring. Jerome Policand’s outfit is already a two-time podium finisher at Spa so this is definitely a car to watch, particularly when the lightning-fast Marciello is behind the wheel.

Ferrari’s last win in the Ardennes came back in 2004. If you’re looking for a good omen, the car that secured victory that day, a 550 Maranello, recently sold at auction for more than $4m.

It will also be fascinating to watch Sergey Sirotkin tackle the event for the first time in the #72 SMP Racing machine. The Russian has shown impressive speed this year and in Miguel Molina and Davide Rigon he boasts two of the best teammates in the business.

There’s an additional Ferrari thanks to HubAuto, which has assembled a crack line-up of Kamui Kobayashi, Marcos Gomes, and 2018 race winner Tom Blomqvist. Any of the Ferrari crews could be celebrating come Sunday afternoon.

After taking an unprecedented overall title sweep last year, there’s pretty much just one thing left for Lamborghini to do: win at Spa. The #63 Orange1 FFF Racing crew has not enjoyed an easy start to its Endurance Cup defence and will be relying on a stellar run in the Ardennes to reignite its hopes.

The #163 Emil Frey Racing line-up could also be a factor. Franck Perera is vastly experienced, while Albert Costa and Giacomo Altoe have shown excellent form in the Sprint Cup. The same is true of the sister #14 crew, and if they can add consistency to their speed the Swiss squad will be very competitive.

There is a very simple rule when assessing potential winners at Spa: never rule out BMW. The German brand holds a record 24 overall wins, and while it has just two full-pro cars this term both are contenders for the top of the podium.

This was underlined by Walkenhorst Motorsport taking a one-two finish at the recent Indianapolis 8 Hour. Two of the Indy winners – Nicky Catsburg and Augusto Farfus – are joined by double Spa winner Philipp Eng, forming a heavyweight crew.

There’s plenty of talent across the garage, too, with Martin Tomczyk, Nick Yelloly and David Pittard sharing the #35 M6 GT3. BMW may only have two bullets in the chamber, but it would be no surprise if one of them hit the target.

McLaren returns to Spa with its new 720S and a new team, Optimum Motorsport. Rather more familiar is the presence of Rob Bell, who first raced a McLaren at the 24 Hours in 2011. He is joined this year by fellow factory pilot Joe Osborne and development driver Ollie Wilkinson.

The #69 crew has scored points in both Endurance Cup events thus far, showing consistency and race craft rather than outright speed. That bodes well for the longest race of the season, where they will be chasing McLaren’s first top-10 finish at Spa since 2012.

Last but by no means least, Honda. The Japanese marque also has just one full-pro representative at Spa, with the #29 Team Honda Racing entry competing as part of its full-season Intercontinental GT Challenge Powered by Pirelli programme.

Fielding one car means there’s no room for error, but this is a highly capable crew. Renger van der Zande and Mario Farnbacher were part of the line-up that finished sixth last year, a fine debut result for the NSX GT3 Evo.

This time they’re joined by multiple American sportscar champion Dane Cameron, and the trio are fresh from a podium at the Indianapolis 8 Hour. While the odds are not in their favour, this is a one-car effort with every chance of a big finish.

Which of these crews will emerge victorious? It really is anyone’s guess. As ever, the only way to know for sure is to follow events from Spa-Francorchamps. Live coverage begins on Thursday 22 October with pre-qualifying, which is followed later in the day by the main qualifying session.

On Friday it’s Super Pole, which brings together the fastest 20 qualifiers to battle for the coveted P1. This will at least give us an idea of the leading contenders: only twice since 2001 has the winner qualified outside the top-20.

This year’s Total 24 Hours of Spa gets underway at 15.30 on Saturday 24 October, considerably later in the year then we are used to. The race will also feature a great deal more night running than previous editions, adding to the challenge faced by competitors. Indeed, whoever emerges on top in 2020 will have thoroughly earned their victory.