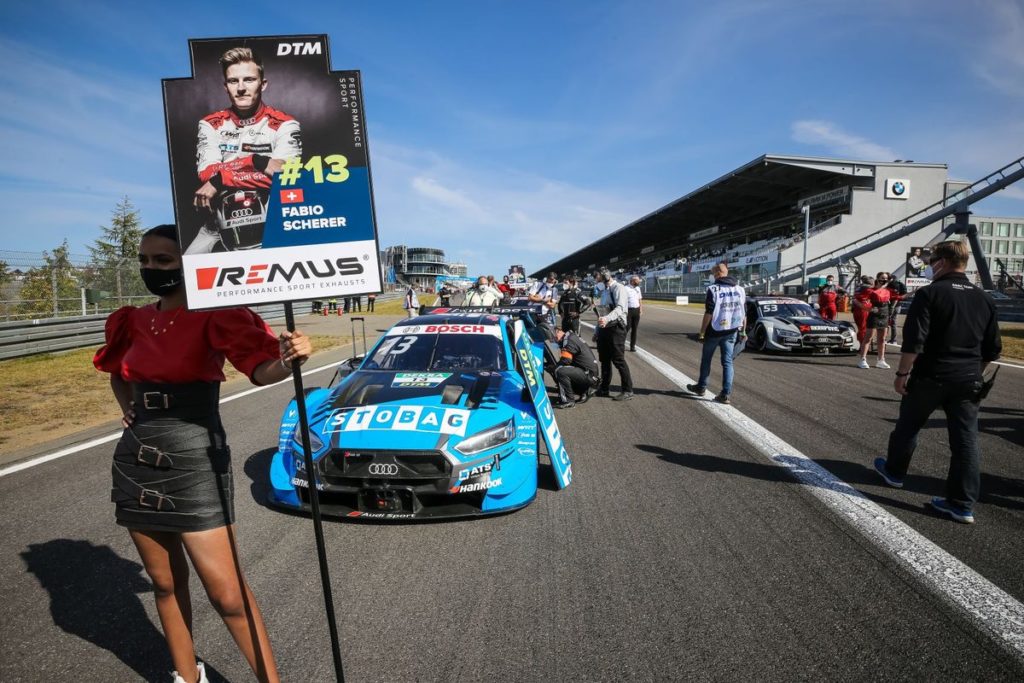 Fabio Scherer has shown his best qualifying performance so far on this weekends races 11 and 12 of the DTM at the Nurburgring. Starting position 9 in the final practice on Saturday was a good answer to the races on the same track one week before. “We already worked in the right direction in free practice and found a good set-up,” says Fabio, who drives for the Belgian WRT Team Audi Sport. “I had full confidence in the car. With only 0.35 seconds behind pole-position I had a good feeling for the race.”

Up to the mandatory pitstop Fabio was comfortably in the points’ positions. “Unfortunately, not everything went smoothly when I came in and I lost about three seconds,” said the Swiss driver supported by STOBAG and ATS Banding Systems. “This caused me to run into traffic. That wasn’t planned that way. In any case, I was still on course for points at halfway of the race when somebody hit me when accelerating out of Turn 1. My Audi RS5 DTM drifted off to the right and hit the other car that had caused the collision.”

Fabio’s Audi was so badly damaged by the collision that he had to retire shortly afterwards. What was particularly annoying: The car who caused the collision was already one lap down and therefore and had little to do with the outcome of the race.

For Sunday’s qualifying, Fabio again was completely determined. But with a 1.1-second gap to the pole-position, Scherer started the race only from P14. He waited for the mandatory stop for a long time, so that the DTM rookie was second overall for a short period. Although Fabio was able to drive faster towards the end of the race than the cars in front of him, he had to settle for P14 in the end. “We had a technical issue today in Q2, otherwise we could have repeated what done on Saturday.”

DTM will continue at Zolder, Belgium, in a good two-and-a-half weeks, where four races will again be held within eight days. The break comes at a convenient time for Fabio. “As a rookie it’s very difficult in the DTM. If you have back-to-back races you have almost no time to analyse the problems and find solutions. That’s why I hope that by the time we get to Zolder we’ll be able to sort out a few things that didn’t go according to plan at the Nurburgring.”

0 0 0 0 0
Previous : ADAC GT Masters – Win for Audi duo Niederhauser and van der Linde takes them to the top of the championship table
Next : WRC – Evans claims victory for Toyota Gazoo Racing on a turbulent final day