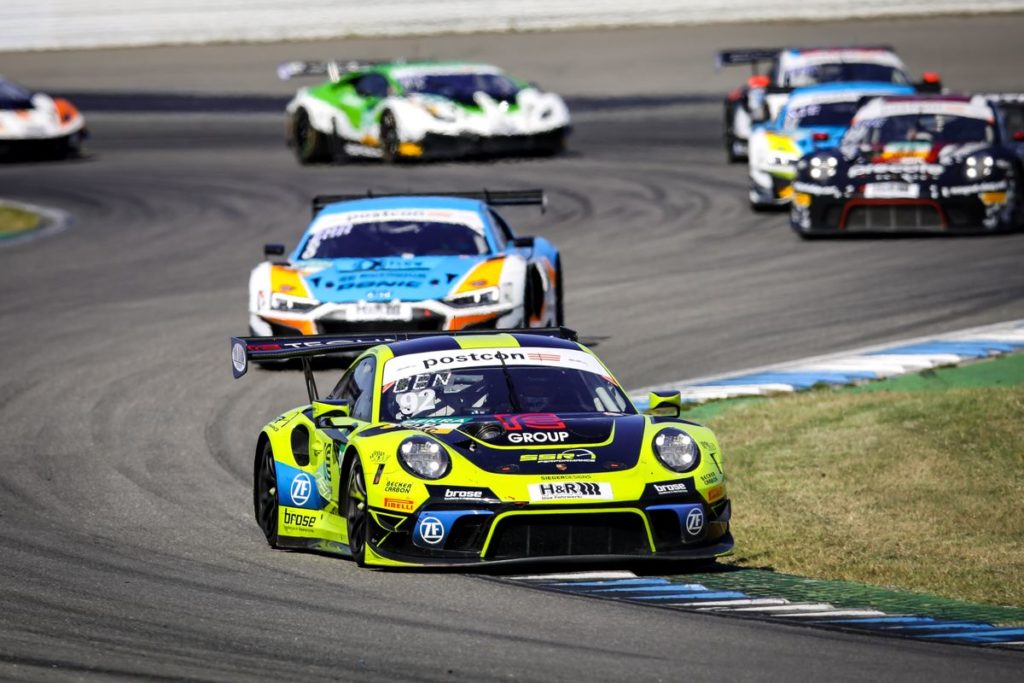 Christian Engelhart (33, GER) and Michael Ammermüller (34, GER, both SSR Performance) put in a strong performance to not only secure victory in Saturday’s ADAC GT Masters race at Hockenheim but also take over at the top of the standings. Last year’s champions Patric Niederhauser (28, CH) and Kelvin van der Linde (24, ZA, both Rutronik Racing) finished second in the best of the Audi R8 LMS contingent, while Lamborghini drivers Tim Zimmermann (24, GER) and Steijn Schothorst (25, NL, both GRT Grasser Racing Team) took third place. “We had a great car again today,” said winner Michael Ammermüller with evident satisfaction. “The team has done a fantastic job again. Christian laid the foundation for our success with his overtaking manoeuvre in the battle for the lead.”

Christian Engelhart and Michael Ammermüller put their stamp on the race at an early stage. Engelhart was initially stuck behind pole-sitter Dennis Marschall’s (24, GER, Rutronik Racing) Audi over the first few laps, but the Porsche man’s opportunity came when the race restarted on Lap 8 after a red-flag to retrieve an advertising banner that had come loose. Engelhart used slipstreaming to overtake local favourite Marschall on the approach to the hairpin, and his partner, Ammermüller, subsequently maintained the lead after the driver handover. He controlled the race from the front, opening up a gap of almost five seconds at times. He eventually took the chequered flag by a winning margin of 1.8 seconds. This second victory of the season for Engelhart and Ammermüller has now taken them to the number one spot in the championship table for the first time this season.

Second place ultimately went to defending champions Patric Niederhauser and Kelvin van der Linde. Niederhauser handed over the car in fourth place, and his partner immediately moved up several places right at the start of the second stint. Tim Zimmermann and Steijn Schothorst in P3 gained even more ground on their way to a place on the podium. Having started from ninth on the grid, Schothorst made an impressive charge up the field in the second stint of the race. His reward came in the form of a maiden ADAC GT Masters podium. Zimmermann also won the Pirelli Junior classification.

The battle for the remaining points-scoring positions also produced plenty of wheel-to-wheel action. Klaus Bachler (29, AUT) and Simona De Silvestro (32, CH, both Küs Team75 Bernhard) in a Porsche took fourth place ahead of Franck Perera (36, FRA) and Albert Costa Balboa (30, ESP, both GRT Grasser Racing Team) in one of the other Lamborghinis.

Philip Ellis (27, GB) and Raffaele Marciello (25, ITA, both Knaus-Team HTP-Winward) were the best placed Mercedes-AMG drivers in sixth position. P7 went to Robert Renauer (35, GER) and Sven Müller (28, GER, both Precote Herberth Motorsport), who had been third in the Porsche for much of the first stint.

Maro Engel (35, Monte Carlo) and Luca Stolz (25, GER, both Toksport WRT) had led the overall standings until now but finished out of the points in 18th position in their Mercedes-AMG. Elia Erhart (32, GER, EFP Car Collection by Tece), who shares an Audi with Pierre Kaffer (43, GER), won the Pirelli Trophy for amateur drivers for the first time.

Michael Ammermüller (SSR Performance, Porsche 911 GT3 R):
“The decisive moment for us came with Christian’s overtaking manoeuvre against the car that had been leading up to that point. My job then was to manage our lead and not to make any mistakes. Right up until the end of the race, I was driving at the limit, but always making sure I didn’t stress the car too much.”

Christian Engelhart (SSR Performance, Porsche 911 GT3 R):
“After a difficult start to the race, it was then important not to make any mistakes. Unfortunately, the interruption to the proceedings came at a time when we were just getting into our rhythm. At the restart, I was able to keep up with Dennis [Marschall] and make direct use of his slipstream. The overtaking move was a key moment, followed by a concerted effort to pull out a small but sufficient gap. The traffic on the track then more or less dictated the time of our pit stop, but ultimately we lost hardly any time and were able to bring home the win.”