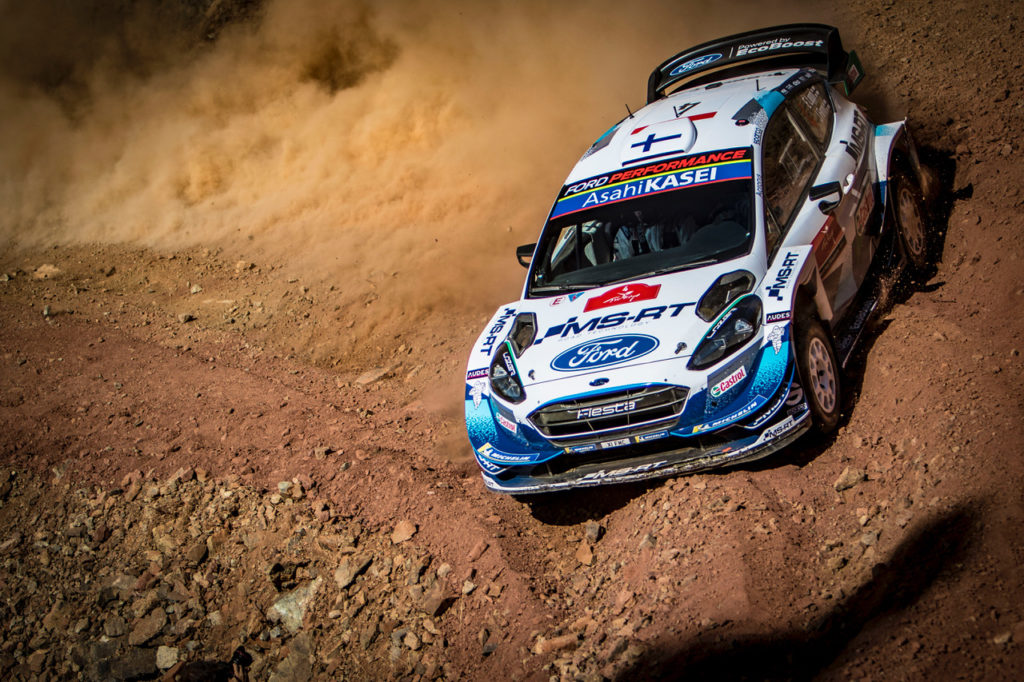 Opting for the hard compound tyre for this evening’s two speed tests, it took some kilometres for his Michelin tyres to reach optimum performance, but once they did the young Finn was on form – equalling if not bettering the splits of his rivals.

Were it not for the hanging dust which blighted his run through the final stage, Suninen could have hoped for even more – but ends the day in a good position and all to fight for through tomorrow’s 107.38 competitive kilometres.

Esapekka Lappi and Janne Ferm also opted for the hard compound tyre but felt they suffered some damage part-way through the second stage. Losing their rhythm and having to slightly back off the pace, they lost valuable seconds to end the day in eighth place – but are still in the fight just 6.6 seconds shy of the lead.

Gus Greensmith and Elliott Edmondson set the third fastest time through the first run of Shakedown, but took some time to get up to speed with the hard compound – ending the day in ninth place albeit less than 10 seconds shy of teammate Lappi.

Elsewhere in the WRC 2 category, Adrien Fourmaux and Renaud Jamoul produced anther stunning performance behind the wheel of their EcoBoost-powered Ford Fiesta Rally2 – 12.6 seconds faster than anyone else through the opening speed test.

Extending their lead with another fastest time in both category and class on the second stage, the Franco-Belgian pairing hold an impressive 23 second lead on what is their first encounter with the Turkish terrain.

Team Principal, Richard Millener, said: “I think we can be pretty happy with the job we have done today. We’re in the hunt, and only a handful of seconds away from the lead. None of our drivers have tested ahead of this event, and the conditions are the complete opposite to those encountered in Estonia – which just goes to make our current position all the more positive. Teemu looks hungry for another podium and I wouldn’t bet against him right now. He’s always performed well on events like this, and there is still a long way to go so let’s see what he can do tomorrow. Esapekka lost a little more than we would have wanted which has cost him in valuable road position for tomorrow, but he’s not far away and has a sensible head on his shoulders which is something you definitely need on an event like this. Gus showed his potential on that first run through Shakedown, and he really enjoys tomorrow’s stages. He still has a lot to learn and a lot of experience to gain, but we can see some strong times coming through from him this weekend. And in WRC 2 Adrien is delivering another really impressive performance. We know that the Fiesta is strong and competitive across all levels of competition, and Adrien has really showcased the strength and performance of the Fiesta Rally2 today. Looking at the way he’s driving, it’s hard to believe that this is his first time here. He’s being cautious on the rough sections and pushing where he knows he can; but he also knows that there is a long way to go, so let’s see what tomorrow brings.”

Teemu Suninen (6th) said: “I tried to push as hard as I could today – driving these two stages like I would the Power Stage because road position will be really important tomorrow. I’m quite pleased with the job we did, but there is still a long way to go. We have seen so many rocks that can destroy the tyres or suspension, so we need to be careful and deliver a clean drive as well as the times.”

Esapekka Lappi (8th) said: “It was a pretty good start. The car felt good and we were driving well, but there was a small issue on the last stage. We had a hard hit on the front right and I thought I had a puncture – but it looks as though it was maybe a soft damper or something like that. It came back towards the end of the stage and we only lost a few seconds, but those few seconds counted for a lot tonight and it will be tricky with the road position tomorrow. Still, we’ll give it our best. This is a long rally and it’s all about the long game.”

Gus Greensmith (9th) said: “We brought the car back in one piece with no issues so that’s good, but I was hoping for a little bit more. I felt really comfortable on the medium tyre in Shakedown, but we went for the hard compound this afternoon and without the experience I had a pretty bad first split with the car moving around quite a lot. The times were pretty good after that, so it felt like a bit of a missed opportunity. Now I’m really looking forward to tomorrow. It won’t be easy with my road position, but these stages are some of my favourite of the year so let’s see if we can have a bit of a battle.” 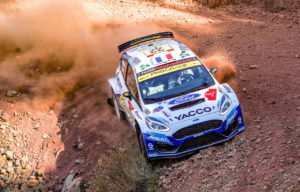 Adrien Fourmaux (1st WRC2) said: “I’m really happy with the job we have done today and the stages are actually really challenging and enjoyable to drive. Of course it was tricky with the dust, but we focused on being cautious in the rough sections and pushing where we could. It’s a really good start, but there is still a long way to go so let’s continue like this tomorrow and see how we go.”