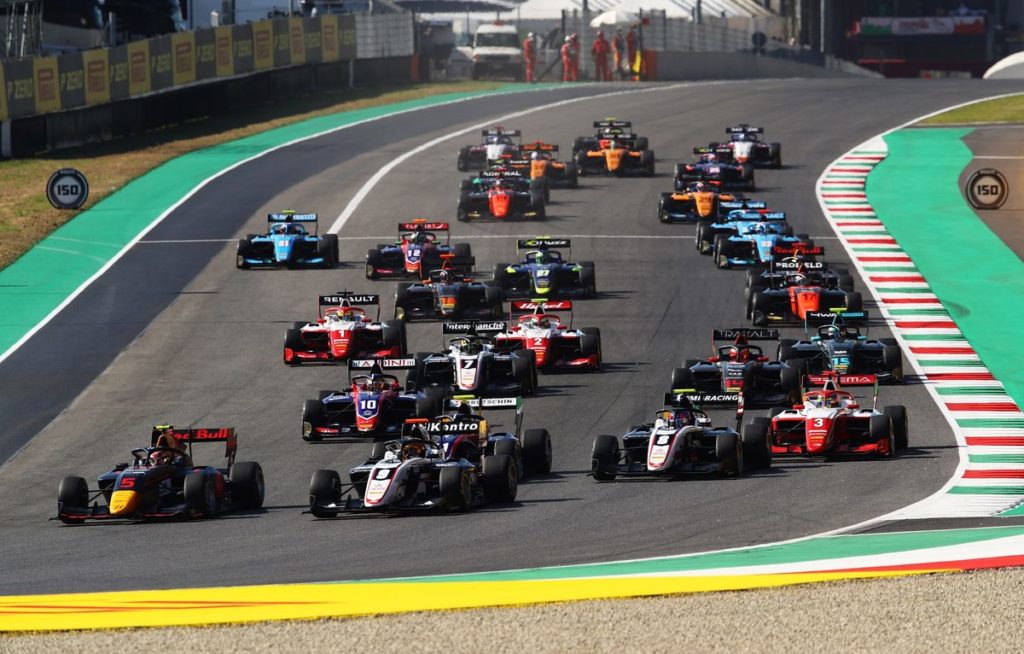 Oscar Piastri clinched the FIA Formula 3 Drivers’ Championship in an incredible battle to the wire at Mugello, as Liam Lawson dominated Race 2 for his third win of the season. The New Zealander finished 7.8s ahead of David Beckmann, while Théo Pourchaire fought his way to third to fall agonizingly short of the title, finishing just three points shy of Piastri in the standings.

Logan Sargeant started the day second in the Championship order, level on points with Piastri, but was forced out of the race on the very first lap after a coming together with Trident’s Lirim Zendeli. A tantalizing two-way fight for the crown ensued between Piastri and Pourchaire, which did not disappoint.

Piastri began the day in 11th, but battled up to seventh at the chequered flag to ensure the title was his despite Pourchaire’s best efforts.

Lawson’s win wasn’t enough to net him fourth in the Championship, with the Kiwi falling to fifth after Frederik Vesti followed up his Race 1 win with P9 and the fastest lap in Race 2.

Lawson was confident and composed off the line, smoothly getting away from Sebastián Fernández who tucked in behind him. However, all eyes were locked firmly on the three-way title battle between Piastri, Sargeant and Pourchaire.

Level on points with Piastri, but starting ahead of his teammate on the grid, Sargeant had one hand on the crown heading into the first corner, only to see his title bid fall apart. The PREMA racer touched wheels with Zendeli at the second corner of the first lap, and the pair were dumped into the gravel trap and forced to retire.

Piastri had been handed an almost dream scenario. The Australian had made up four places when the lights went out and found himself in seventh place, ahead of Pourchaire, with Sargeant out of the race.

The Safety Car led the field around the track for the next three laps as the PREMA and the Trident were cleared away by the marshals. The order was given an almighty shuffle at the restart, as Piastri stuttered and fell back to P10. Pourchaire grabbed sixth, but that wasn’t enough for him to win the title.

As it stood, Pourchaire needed at least third place to take the title, but was stuck behind the HWA RACELAB of Enzo Fittipaldi. He was given a slight helping hand as Alex Smolyar was passed by the Brazilian, and then didn’t put up much of a fight as Pourchaire followed through.

This was the impetus the Frenchman needed, finally getting ahead of Fittipaldi and moving into fourth, directly behind teammate Fernández. Vesti, immediately in front of Piastri, was told to either get on with overtaking Jake Hughes, or to let his teammate through.

Smolyar had started to fall through the field, dropping behind Hughes and into the pathway of Vesti. The Russian proved much easier to overtake than the Briton, as the Dane dashed ahead and into eighth.

Pourchaire managed to finally tussle his way in front of Fernández for third, who was reluctant to surrender a maiden podium. This briefly put Pourchaire first in the Championship, but Piastri darted ahead of Smolyar to reclaim it seconds later. The Australian followed this up with a move on his teammate for eighth and Pourchaire now needed at least second, or fastest lap bonus points.

Piastri already had his hands on the title as they entered the final corner, but the Australian wanted to make sure of it. Fernández had tumbled down the order and Piastri fired past the Spaniard down the main straight and across the line.

So intense was the title battle, that it could have been easy to forget that Lawson was after a third win of the year. The Kiwi had been so calm, measured, and controlled out in front, that his victory had never looked in doubt. In the end, Lawson crossed the line with a solid 7.8s advantage on Beckmann.

Pourchaire clinched the final podium spot, with Fittipaldi in fourth for his best ever F3 result. Richard Verschoor sealed fifth ahead of Hughes and Piastri. Fernández held on to eighth, with Vesti in ninth and Smolyar 10th.

Piastri secures the crown with a tally of 164 points, three ahead of Pourchaire. Sargeant falls just four points short in third, with Vesti fourth on 146.5. Lawson takes fifth on 143. In the Teams’ standings, champions PREMA finish the season with 470.5 points, ahead of Trident on 261.5. ART Grand Prix are third, with Hitech Grand Prix fourth, and HWA RACELAB fifth.