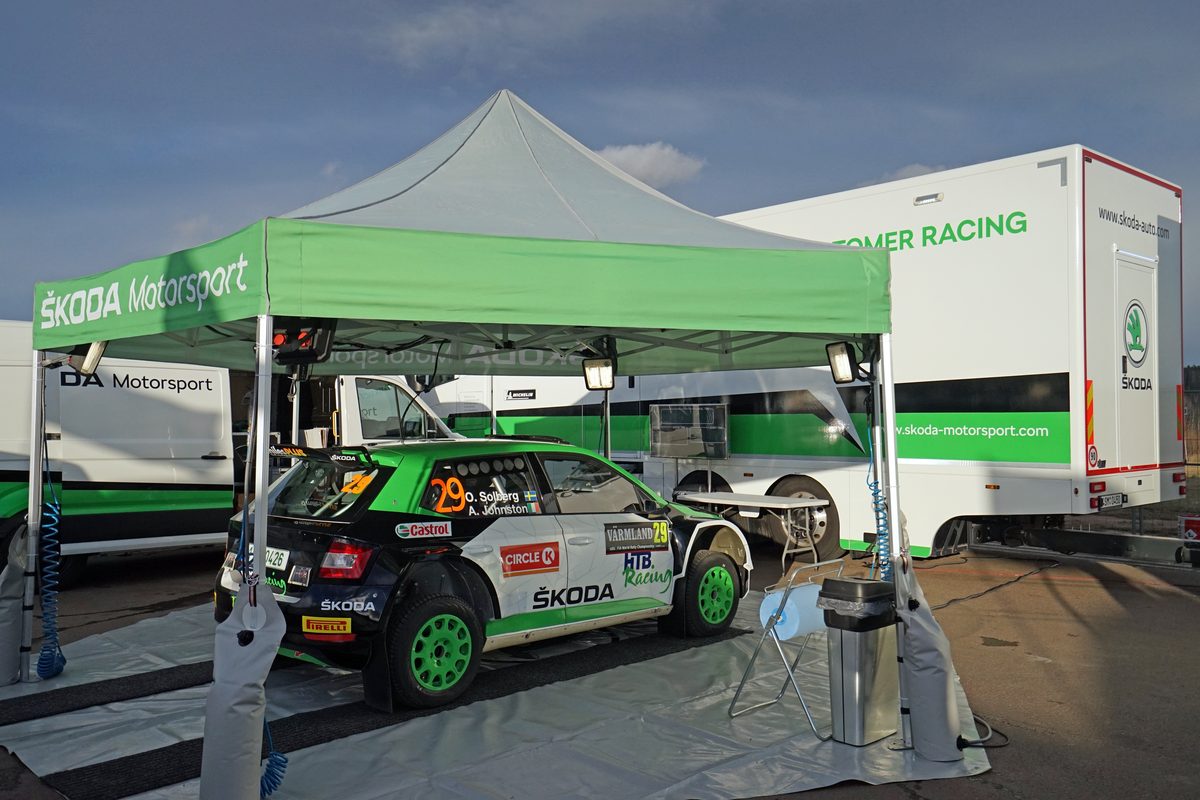 Because of the Coronavirus, all sporting events like the Olympic Games, UEFA Euro 2020 or the Football Champions League matches and Formula One races have been postponed or even cancelled. While the FIA World Rally Championship is on a break as well, we took a look behind the curtain at ŠKODA Motorsport to find out what it takes to provide the best possible service to the customers worldwide. A drive with the ŠKODA Motorsport convoy to the Rally Sweden in the mid of February gave us the information what is logistically needed.

At the headquarter of ŠKODA Motorsport in the outskirts of Mladá Boleslav, around 100 employees are working under one roof. When the cooperation with Oliver Solberg’s team started at Rally Sweden in mid-February, a lot of logistical work and paper work had already been done. The entry – the formal registration for Oliver Solberg and co-driver Aaron Johnston (competing with a ŠKODA FABIA Rally2 evo) into the second round for the FIA World Rally Championship 2020 – had to be done by Oliver’s team already by 14 January 2020.

After completion of the roll-out, the final check of the ŠKODA FABIA Rally2 evo in Mladá Boleslav, a convoy from ŠKODA Motorsport started exactly one week before the start of Rally Sweden (13/02/–16/02/2020) the long journey. The convoy which left Mladá Boleslav consisted of an 18 metres long semi-trailer, a van with trailer and a minibus with the race car in the trailer.

A fully equipped workshop on wheels
For Rally Sweden, the semi-trailer carried spare parts including mechanical components like suspension, gear boxes, differentials, brakes, rims and body parts like bumpers, windscreens, bonnets, fenders and doors. Theoretically, the mechanics can rebuild two rally cars with the spare parts carried by the rolling service centre. Simply everything is on board, which can be changed within the allowed service time of 30 or 45 minutes respectively. The only component, which by regulation is not allowed to change during an WRC event, is the entire engine of the rally car.

The semi-trailer carries its own power station, 450 litres of water for washing the rally car, a lathe, a grinder and a tyre changer. With the experience of many years on rallies worldwide, the ŠKODA Motorsport customer racing service truck has been designed and custom-built.

With more than 500 horse power and a displacement of 15.6 litres, the SCANIA engine is more powerful than the ŠKODA FABIA Rally2 evo 1.6-litre turbo engine offering around 290 horse power. But with 25,000 kilograms, the weight of the truck is more than 20 times higher than the rally car (1,230 kg minimum weight due to the FIA regulation).

One-way more than 1,000 kilometres on the road plus ferry transfer
After roughly 750 kilometres, the ŠKODA Motorsport truck and vans had reached the port of Kiel in the north of Germany to take an overnight ferry to Gothenburg in Sweden. After another 320 kilometres on the road, the ŠKODA convoy reached Torsby. Each road of the whole route had been checked beforehand. The main concern: Minimum headroom for example of bridges had to fit to the height of the semi-trailer.

On Sunday before Rally Sweden (9 February), Oliver Solberg and co-driver Aaron Johnston did check the ŠKODA FABIA Rally2 during the last pre-event test. On the following day, the service park was opened and the ŠKODA Motorsport team together with the crew from Oliver Solberg Racing prepared the mobile workshop, including the tent for the service area plus a spacious hospitality compound. Until the end of the rally on Sunday, it was the home for all team members. Immediately after the rally finish on Sunday afternoon, the dismantling of the service area started and right afterwards, the ŠKODA convoy headed back to its home base in Mladá Boleslav.