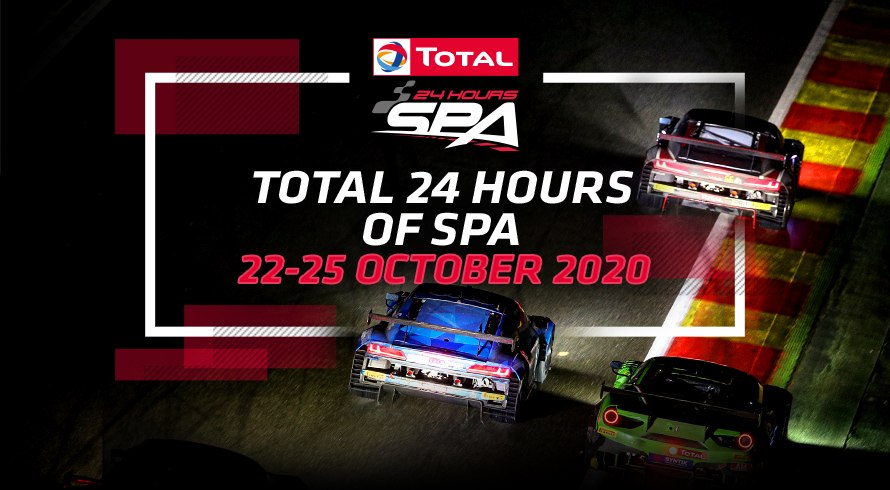 The world’s leading GT drivers will get a unique taste of autumn in the Ardennes later this year when they tackle the Total 24 Hours of Spa on 22-25 October.

The marquee round of GT World Challenge Europe Powered by AWS and Intercontinental GT Challenge Powered by Pirelli was originally scheduled to run on 23-26 July. However, with large gatherings prohibited in Belgium until the end of August due to the COVID-19 pandemic, it will now be staged in October for the first time since its inception in 1924.

Moving the main event back by three months will ensure that the logistical and organisational challenges posed by the Total 24 Hours of Spa can be met, while the new date will also create a unique visual spectacle in the Ardennes. Running in autumn will mean fewer daylight hours at the circuit, adding further night running and increasing the sporting challenge faced by competitors.

A number of support categories have been confirmed, with GT4 European Series, Lamborghini Super Trofeo and TCR Europe Series all set to tackle the 7km Ardennes circuit ahead of the 24 Hours. Revised dates for the Total 24 Hours of Spa test days have also been set, with the preparatory run shifting from mid-June to 29-30 September.

With a new schedule in place for its marquee event, SRO Motorsports Group is now fully focussed on ensuring that the 2020 Total 24 Hours of Spa upholds its reputation as the world’s premier GT race. The traditions that have established its success over many years will be maintained wherever possible, while the unique aspects of competing in autumn will also be celebrated.

Spa-Francorchamps is famous for its setting amid the Ardennes, a vast and rolling forest that changes with the seasons. This year’s race will therefore be visually different from the norm, the backdrop and lighting changing to match the time of year.

But in terms of passion and preparation the Total 24 Hours of Spa will remain true to its rich history, with the world’s top GT racers adding their own splash of colour to the palate. This year, autumn in the Ardennes promises to be brighter than ever before.