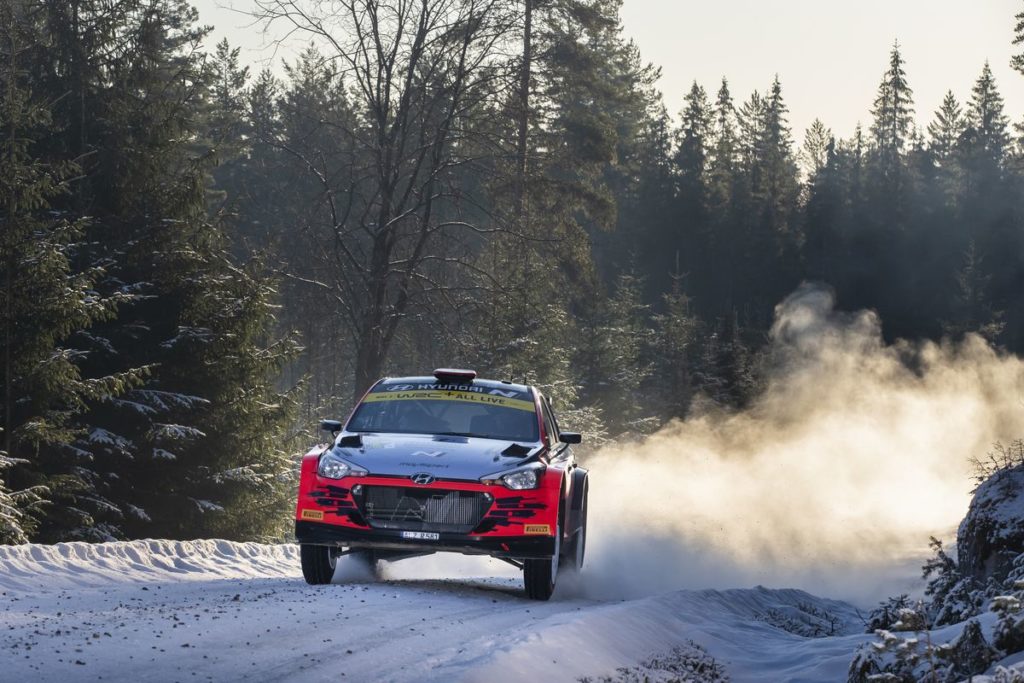 Hyundai Motorsport’s WRC 2 crews put in a valiant effort during a shortened nine-stage Rally Sweden, the second round of the 2020 FIA World Rally Championship (WRC), as unseasonal weather conditions forced organisers to cancel half of the planned stages.

The two crews – Ole Christian Veiby/Jonas Andersson and Nikolay Gryazin/Yaroslav Fedorov – showed encouraging pace in their Hyundai i20 R5, battling conditions far removed from the typical snowbank-lined stages that Rally Sweden usually offers. At the end of the nine-stage rally, Veiby emerged second in the WRC 2 class, securing his first category podium of the season, with Gryazin in sixth.

Unusually warmer conditions for this time of the year made snow a scarcity and required crews to negotiate full gravel conditions at times. Friday and Saturday followed an identical four-stage schedule. Hof-Finnskog (SS2/SS5, 21.26km) got both days underway across the border in Norway followed immediately by a remote tyre fitting zone.

The loop continued with Finnskogen (SS3/SS6, 20.68km) before Nyckelvattnet (SS4/SS7, 18.94km) brought the action back into Sweden. The short Torsby Sprint concluded both days with a muddy gravel stage. As conditions got even warmer – and wetter – over the weekend, the decision was taken on Saturday to reduce Sunday’s itinerary to a solitary run through the Likenäs Power Stage.

With six of the completed stages featuring roads in Norway, it was a true home event for Veiby and his Swedish co-driver Andersson. The crew was on the pace from the outset, taking a stage win in SS2. Even if their lead was short-lived, they remained right on the pace of the experienced Mads Østberg to end Friday second in the WRC 2 class.

Russians Gryazin and Fedorov, having finished third in WRC 2 in Monte-Carlo, started their second event with Hyundai Motorsport with third place on the opening stage, but dropped to fifth by the day’s end.

Veiby added a second stage win on Saturday morning – despite picking up a puncture towards the end – setting the fastest time again through Hof-Finnskog, a forest owned by his family. Reducing the deficit to the WRC 2 leader in that stage, he was unable to maintain the recovery and ended up 15.8s adrift in second. Gryazin lost two-and-a-half minutes in SS7 due to a puncture, dropping down to sixth place. The crews retained their positions with a trouble-free run in the wet Power Stage.

Veiby said: “It’s been a tricky weekend, and in conditions we are certainly not used to here. We have had some good stages, and we need to be happy with that, but there are also areas where we need to understand where we’ve lost time. The event got off to a good start with a win on my home stage, and we were the best R5 overall. I was really happy with that! Saturday also started well with a stage win, even with a puncture towards the end. We then struggled again on the following two stages, which was frustrating. We weren’t able to catch up to Mads, but we pushed as hard as we could and took good points for the championship.

Gryazin said: “The rally was tough. At the beginning we had some good pace on the stages, but we did two mistakes which hampered our end result. We had a spin on the second stage on Friday, and then had a puncture on Saturday, which lost us a lot of time. It was not easy to avoid because it was a fast corner over a crest and there was an unexpected stone on the inside. Today, was just a safe drive. There was no point taking risks in tricky conditions when we had nothing to gain. For sure, we have areas we need to improve, but this was a good experience. Thanks to Hyundai Motorsport, RedGrey Team and the engineers for their support.”

Hyundai Motorsport Team Principal Andrea Adamo: “Overall, it has been good to see Veiby finishing the rally after a tricky start to the season. He pushed very hard to get the best out of everything and to bring home some championship points. He showed good pace and I am sure he will now build on this competitiveness for the future. We hope that Nikolay will improve soon and get used to our Hyundai i20 R5.”

2020 WRC 2 Championship for Drivers’ Standings
After round 2

2020 FIA WRC2 Championship for Teams’ Standings
After round 2