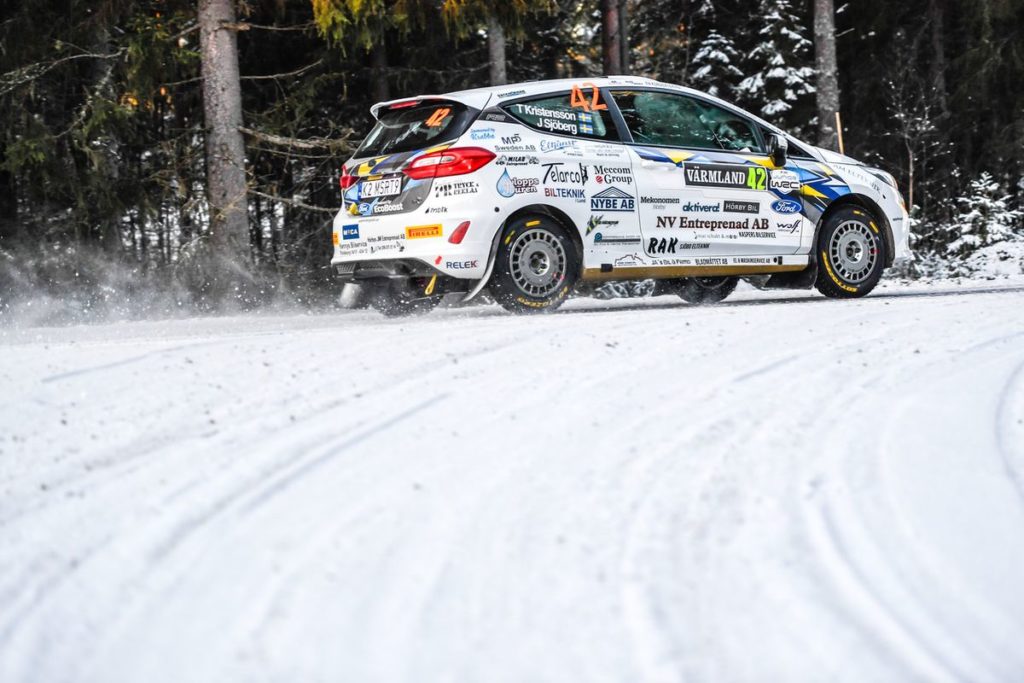 Tom Kristensson is looking to repeat his 2019 Rally Sweden victory and keep the Junior WRC Rally Sweden winners list an all-Swedish affair after leading from the start line of Hof-Finnskog 1 on Friday and not looking back.

Kristensson claimed the first stage win of the 2020 FIA Junior WRC Championship on the first pass of Hof-Finnskog, creating a sizeable lead early on by going 10.2 seconds faster than Latvian Martins Sesks who finished the stage second. The opening stage was not without drama though as Swedish rookie Pontus Lonnstrom, sustained a puncture and lost three minutes, throwing any hopes of a top-five finish out of the window.

Finnskogen 1 would see Kristensson take his second stage win and another precious championship point thanks to points on offer for every stage win in Junior WRC. Try as he might, Sesks was unable to match the pace of Kristensson, and settled for third with Finnish rookie Lauri Joona claiming second with the pair 14.3 seconds and 9.5 seconds adrift of the Swede respectively. This meant that after just two stages, Kristensson had already built a lead of over 20 seconds to Joona while Sesks trailed by 24.5 seconds in third, a clear indicator that the unusual conditions on the Swedish stages very much suited the calm and collected Swede.

Sesks was finally able to extract revenge and begin his assault on Kristensson’s lead on SS4, taking the stage win and reducing Kristensson’s lead by five seconds. The third stage of the day marked the first retirement as Jon Armstrong had a major incident in his EcoBoost-powered Ford Fiesta R2T19. Losing the rear off the edge of the road on a fast right hander, the crew were sent hurtling up a banking and airborne, spinning mid-air before stopping abruptly against a post when landing. Armstrong and co-driver Noel O’Sullivan were able to exit the car and declared themselves ok but Armstrong went to hospital for further checks under precautionary measures and was later released from hospital and returned to the Torsby service park. Due to the extent of the damage sustained to Armstrong’s car, the crew have retired from Rally Sweden.

By the end of the morning loop, Kristensson led Sesks by 19.4 seconds with Joona a further 10 seconds down in third. Estonian Ken Torn sat fourth and 46.9 seconds adrift of Kristensson with Flying Finn Future Star award winner Sami Pajari fifth but only 6.6 seconds behind Torn.

The first pass of the Torsby Sprint stage marked the final stage of Friday’s running on Rally Sweden which turned out to be the most closely fought stage so far, delivering a thrilling end to the day. Just four seconds separated the top-five on the stage as Kristensson was able to extend his overall lead despite only delivering the second fastest time. After demonstrating competitive times in 2019, Raul Badiu, who is returning Junior WRC action after a terrifying accident on Rally Finland in 2019, claimed the stage win on the Torsby Sprint stage. The Romanian edged out Kristensson by a slender 0.4 seconds to claim the first stage win of his Junior WRC career and with it, a championship point.

The drama didn’t stop there on the Torsby Sprint stage with Fabio Andolfi bringing his day to an action-packed end by rolling within touching distance of the finish line, by sending the back end of his Fiesta R2T19 too far off the edge of the road. Both Andolfi and co-driver Stefano Savoia emerged from the car unharmed and are expected to restart the rally on Saturday.

Tom Kristensson, Junior WRC Rally leader, said: “It’s amazing to be in the lead. Our tyre strategy has worked and everything just feels perfect. I had trouble summarising my day at the stop line of the last stage and they said it must have been a perfect day and I thought, yep, that’s the short version of it! To be honest everything has been better than expected, the surface, the grip, the feeling, the cooperation in the car is really good as well. We are in the rhythm, everything feels good and it’s fun so let’s enjoy the ride and do it.”