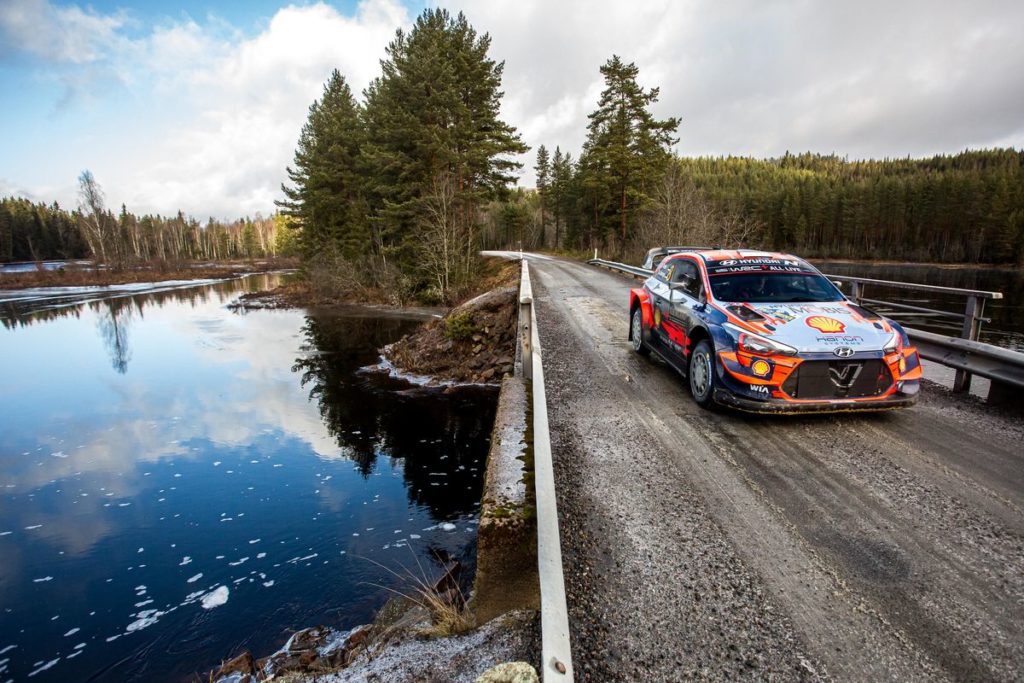 Hyundai Motorsport continues to hold second place in Rally Sweden, the second round of the 2020 FIA World Rally Championship (WRC), at the conclusion of another truncated day due to unfavourable conditions.

Saturday’s schedule followed an identical layout to the opening day with a total of four stages held across Norway and Sweden. Light overnight snow but warmer temperatures created a different set of conditions for crews to tackle, with road order once again influencing stage performances.

Revisiting the 21.26km Hof-Finnskog (SS5) stage early this morning, crews then had a remote tyre fitting zone in the village of Namnå. A double header of Finnskogen (SS6, 20.68km) and Nyckelvattnet (SS7, 18.94km) saw the action move from Norway across the border back into Sweden before a repeat of the 2.80km Torsby Sprint (SS16).

Ott Tänak and Martin Järveoja cemented their hold on second place with a solid Saturday, despite losing ground to rally leader Elfyn Evans. The Estonians have a 17.2-second deficit with only one stage left to run, following the cancellation of SS17 (Likenäs 1) due to expected warmer conditions on Sunday.

Thierry Neuville and Nicolas Gilsoul, starting fourth on the road order for today’s stages, extracted the most out of themselves and the Hyundai i20 Coupe WRC as they remained in sixth overall. The Belgians, winners of Rallye Monte-Carlo, took the fastest time on the Torsby Sprint, the team’s third stage win of the weekend. Irish pair Craig Breen and Paul Nagle, meanwhile, maintained seventh place on the standings as they acclimatised to their car in unseasonal Rally Sweden conditions.

Tänak said: “I can’t really say we’re happy, but we have been steadily making progress and getting valuable experience in the car. We’re still missing some feeling and confidence but that’s down to my lack of seat time. There are still a lot of things that are a bit fresh and some things to learn. We’re taking it step-by-step, improving all the time and understanding what we need to do to be on the pace. We’re not far off but it’s not as enjoyable to see such a gap. It has been a solid start for a short event, and I am sure the speed is there for the future; we just need to work on it.”

Neuville said: “Performance-wise, I am quite satisfied with how things have gone; we have tried to do the best we could and optimise the situation we’re in. At the same time, we’ve had to be clever and avoid making silly mistakes. So far, it’s all fine but it’s also disappointing and frustrating not to be in the position we’d want to be. It’s a very short rally, so it is difficult to catch up lost time solely through driving. We are going to try and maintain our rhythm into tomorrow’s final stage and see what we can pick up for the championship.”

Breen said: “I’d summarise by saying the day has been sometimes good, sometimes bad. Obviously, it’s taking me a bit of time to get going. Again, on this morning’s opening stage, I don’t know why but I dropped too much time. The two other stages of the loop were really nice and I enjoyed myself. Compared to the people around us, we were quite competitive, but obviously there was a lot of cleaning, especially on the third one (SS7) with lots of fresh snow overnight. Thierry was running just behind us and we have been able to match his pace in some stages; we have to be happy with that. In a rally as specific like this you really have to be at one with everything. All things considered; I think we’re still doing a good job.”

Team Principal Andrea Adamo: “We cannot say that we are happy, even if we are in second place thanks to a great performance from Ott and Martin. Nor can we say that our car is as fast as it should be or at the level for which we should have prepared. We have to understand what has not been done 100%. Perhaps it’s a question of our performance just not being at the level of our competitors in this kind of situation. In that case, we have to work hard to improve because these slippery gravel conditions will be experienced in future rallies and we will have to be better prepared.”