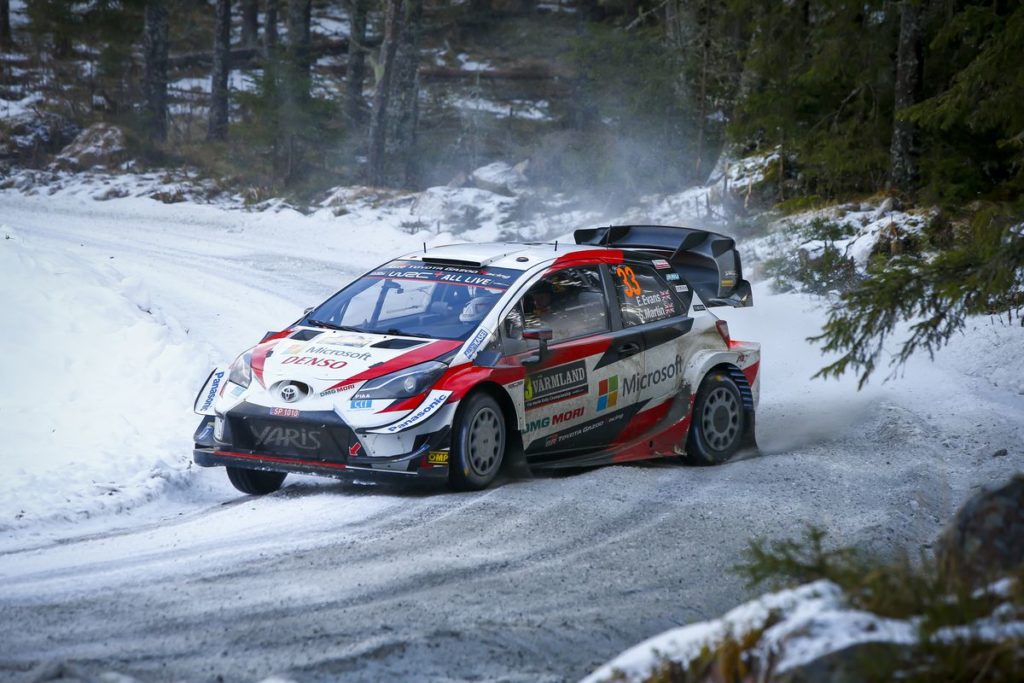 Elfyn Evans leads Rally Sweden by 17.2 seconds with only one stage remaining as he continues his impressive drive in the Toyota Yaris WRC. His team-mates Sébastien Ogier and Kalle Rovanperä are third and fourth overall respectively, with the two drivers separated by just 0.5s as they battle for a place on the podium tomorrow.

The route for the second day of the rally was identical to that of the first day, consisting of three forest stages around the border with Norway plus the short Torsby Sprint stage adjacent to the service park. Temperatures were this time above freezing, although some fresh snow had fallen overnight.

Starting the day with his lead stood at 8.5 seconds, Evans produced a dominant display through the loop of three forest stages, setting the fastest time on each one and more than doubling his and co-driver Scott Martin’s advantage over their nearest rivals.

Ogier outpaced Rovanperä in the morning’s first two stages – Hof-Finnskog and Finnskogen – to take third place away from his rookie team-mate. Rovanperä then recorded the second-fastest time on the Nyckelvattnet test to take back the position, only for Ogier to edge back ahead on the Torsby Sprint stage.

Quotes:
Tommi Mäkinen (Team Principal) : “There is one long stage to go tomorrow and I think it will be a hard one for us to watch! But Elfyn looks very comfortable and in control so I’m not worried about him. He was on another level to the rest today. He seems to be improving his confidence in our car and getting stronger and stronger. It will be up to him and to Scott how they approach the Power Stage and whether they go for the maximum points. Then we have a big battle between Seb and Kalle. I will just let them drive, and they will have to push anyway because there is not so much room behind them to slow down.”

Sébastien Ogier (Driver car 17) : “It’s not been a bad day. We set some good times this morning. The third stage was not the best for me, but other than that I think we’ve done a good day. I’ve felt pretty good in the car. We’ve been playing around a bit with the setup and we’re learning with every kilometre. The Power Stage is obviously going to be important tomorrow. It’s still very tight with Kalle, and also the others guys are not far behind, so we cannot relax. We will have to push to the end, and the conditions could be quite tricky.”

Elfyn Evans (Driver car 33) : “It has been another good day for us and we can be happy with what we’ve managed to do. I had a really good feeling in the car, I’ve been happy with the balance and the confidence it’s giving me. The first two stages this morning were really good. The third one was quite tricky, a bit softer with more loose ice and snow, and the last stage was quite rough but we got through it OK. Let’s see what we face tomorrow, as the conditions are a bit of an unknown. It could be very difficult with the warmer temperatures we have now, but hopefully we can find the same rhythm we have in the last two days. It’s a long stage and we just need to keep our head down and keep doing what we’ve been doing.”

Kalle Rovanperä (Driver car 69) : “This morning I had a good feeling but I was a bit too hard on the tyres and not managing them well, so we were losing time at the end of the stages as we were losing the studs. But we made some small setup changes on the car so that it was not understeering and not loading the front tyres so much, and then the third stage went well. The last stage was in a really rough condition and these were new conditions for me. It’s going to be really difficult for us tomorrow as we don’t have the same experience on this stage as the others, but I will try my best.”

What’s next?
The final day of the rally will consist of just one stage: the 21.19 kilometres of Likenäs. Two passes were originally scheduled, but mild temperatures led organisers to cancel the first running to preserve the roads for the Power Stage, where up to five bonus points will be on offer for the best time.

0 0 0 0 0
Previous : WRC – Hyundai Motorsport has strengthened its grip on a provisional podium in Rally Sweden
Next : WRC – Škoda privateer Lindholm in fight for victory – Solberg holds third at Škoda debut