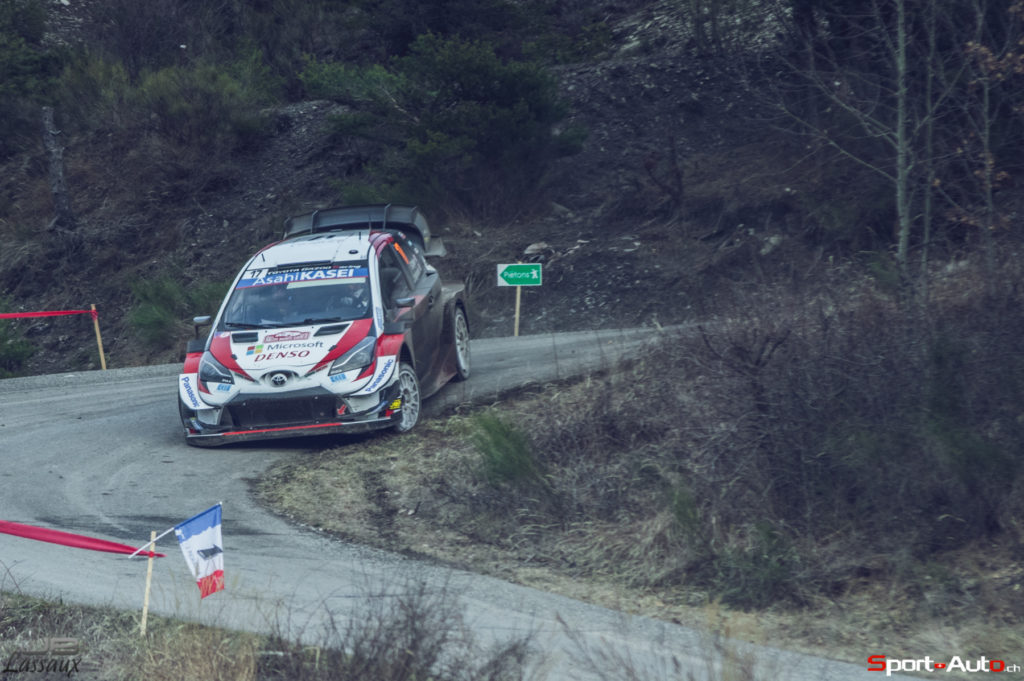 Sébastien Ogier and Elfyn Evans occupy first and second places on the Rallye Monte-Carlo leaderboard after both drivers enjoyed fantastic first full days behind the wheel of the Toyota Yaris WRC, winning five of the day’s six stages between them.

The longest day of the event consisted of two loops of three stages and featured a range of weather conditions, including ice, snow, rain and mud as well as sections of dry asphalt.

Starting the day fourth overall following Thursday night’s opening tests, Evans was fastest on all three of this morning’s stages as he moved into the lead of the rally.

Ogier was quickest on the first two stages of the afternoon loop and then just edged past Evans on the closing test, ending the day 1.2 seconds ahead of his team-mate.

Kalle Rovanperä also had a strong day – the 19-year-old’s first full experience of competing at rallying’s highest level. With his focus on gaining experience, he improved his times during the day and is sixth overall. TOYOTA GAZOO Racing Rally Challenge Program driver Takamoto Katsuta is one place behind Rovanperä in his separately-operated Yaris WRC.

Quotes:
Tommi Mäkinen (Team Principal)
“It was incredible today to see how the speed that our drivers had straight away in our car. Elfyn’s performance this morning was especially impressive and surprised everybody I think. Sébastien wanted to get comfortable and go more step-by-step and now he is showing the performance that we know he’s capable of here. They were both brilliant and made no mistakes at all, and I think they will only improve as they get to know the car better. Kalle is doing an absolutely brilliant job too, always learning, and when the conditions were more stable his speed was very good.”

Sébastien Ogier (Driver car 17)
“Overall, I am happy with the day. This morning I didn’t feel perfectly comfortable in the car and I was a little bit cautious, so I was not in the best rhythm. But for this afternoon we made some little adjustments to the setup and I felt more confident, and I could set some good times. We feared that the tyre choice was not optimal, but in the end it was not that bad, as it was much drier than expected in the second stage of the loop. The gaps are still very small but it is nice to be in this position.”

Elfyn Evans (Driver car 33)
“It was a really good morning for sure. The conditions were not so easy and the grip was quite changeable, but the Yaris gave me good confidence, so I was able to relax and enjoy driving the car. The afternoon was not quite so good – the conditions in the last stage were deteriorating with every car that passed and we were probably a bit too brave on the tyre choice. But overall it’s been a good day and hopefully it will be more of the same tomorrow.”

Kalle Rovanperä (Driver car 69)
“I’m happy with today as we’ve improved a lot from this morning, which was quite difficult for me. Again, the conditions were new, going with slick tyres on some icy sections, so it was quite a careful morning. But it was getting better with each stage and the middle stage of the loop was good on both occasions. I’ve still got a lot to learn but I’m getting more comfortable in the car all the time. Tomorrow will be a new challenge, with a different style of stages I think, and we need to see what the conditions will be like.”

What’s next?
Saturday’s leg consists of two well-known stages each run twice: St-Léger-les-Mélèzes – La Bâtie-Neuve and La Bréole – Selonnet. After the final service of the rally in the early evening, the crews make the journey to Monte Carlo ready for the last day.