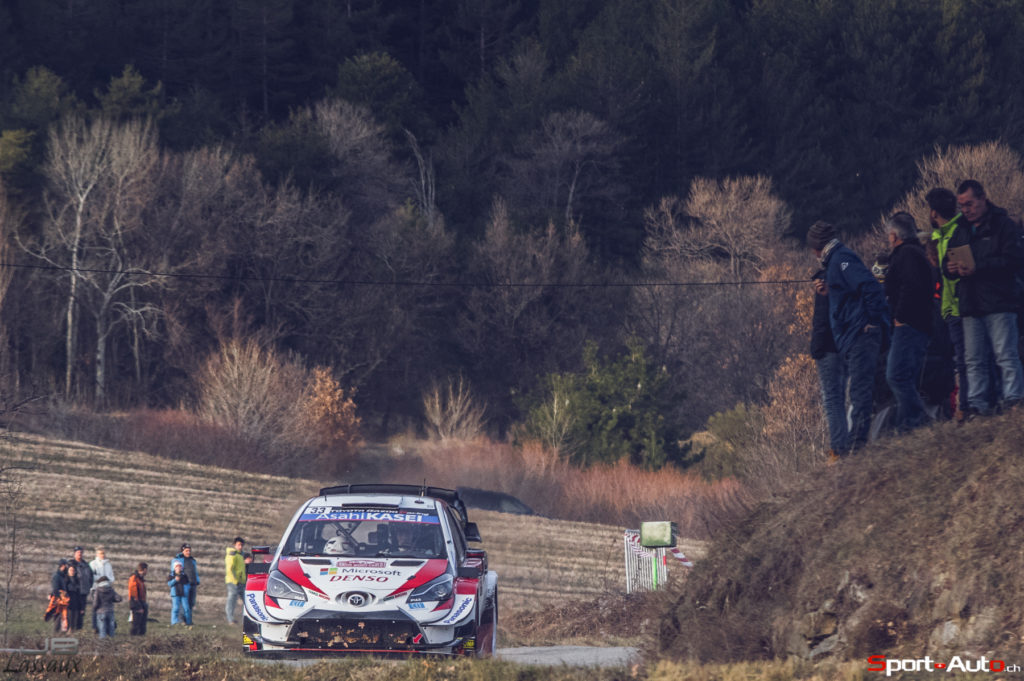 Elfyn Evans leads his fellow Toyota Yaris WRC driver Sébastien Ogier in an extremely close three-way fight for victory going into the final day of Rallye Monte-Carlo, round one of the 2020 FIA World Rally Championship.

The third day of the rally was made up of a pair of stages each run twice, which featured some sections of ice and snow that was gradually melting in the relatively warm temperatures.

Ogier had claimed the lead from Evans on Friday’s final stage, and increased his advantage from 1.2 seconds to 2.8 seconds in the opening test. Evans then reclaimed the advantage however when he impressively won an icy SS10, some 7.6s quicker than anyone else.

In the afternoon loop, the two drivers were then equal on overall time following SS11. On the final stage, Evans survived a brief wide moment to end the day 4.9s ahead of Ogier, who was too cautious through an icy section on slick tyres. Ogier is 1.5s ahead of the driver in third.

TOYOTA GAZOO Racing Rally Challenge Program driver Takamoto Katsuta is seventh in a fourth Yaris WRC as he too continues to gain experience of the event, posting competitive times in the afternoon loop.

Quotes:
Tommi Mäkinen (Team Principal)
“It’s a very exciting fight for the victory with two of our new drivers in first and second. Elfyn’s performance on the second stage this morning was especially incredible. The conditions were not easy but he had great confidence. Both guys took it a bit more steady in the afternoon on slick tyres but we still have the advantage. Kalle is doing very well too, gaining as much experience as possible. Tomorrow will be a big day and I’m sure it will be a very interesting one to follow.”

Sébastien Ogier (Driver car 17)
“It’s been a consistent day. The only regret we can have is being too cautious in the last stage on the tricky section on the ice. But I always prefer to be too cautious than in the ditch. This is always my strategy on this event and obviously it has paid off quite a few times. Taking risks can work, but not always. At the end of the day I’m not unhappy with today: It’s still very close and all is possible tomorrow. It’s a nice fight and now the plan is to be strong tomorrow and there is still a good chance to win this rally. We’ve had to push hard on these same stages in the last few years already, which is good experience to have.”

Elfyn Evans (Driver car 33)
“Overall it’s been a solid day and it feels good to be leading. I’m pretty happy with the weekend up to this point: the car has been giving me great confidence and the team has been working very well together. It was a very difficult afternoon loop, as we opted for the slick tyres like our rivals but there were still some icy sections out there. I was a bit too careful in the first stage of the loop, and then a bit too optimistic at the end of the last one on the final icy corner and we went off, but luckily we didn’t hit anything. There’s a big fight on for tomorrow and we need to keep focused and not think about it too much.”

Kalle Rovanperä (Driver car 69)
“I’m not quite so happy with today, but it’s still OK: We’re doing exactly what we should do and driving without any mistakes. It was quite tricky conditions through the whole day, and we took it quite safe because we’re not fighting for any positions. I’m still learning how to use the car in the best way in all the different conditions. When you know these things, you can be faster. We have been going without taking any risks, so the times are quite OK when the road is clean.”

What’s next?
The final day of the rally is made up of two stages each run twice. The first, La Bollène-Vésubie – Peïra-Cava, features the legendary Col de Turini. The second, La Cabanette – Col de Braus, will be run as the rally-ending Power Stage, with up to five bonus points on offer.

0 0 0 0 0
Previous : WRC – Hyundai Motorsport holds third and fourth positions at the end of the penultimate day of Rallye Monte-Carlo
Next : WRC – Lappi on the hunt for fourth