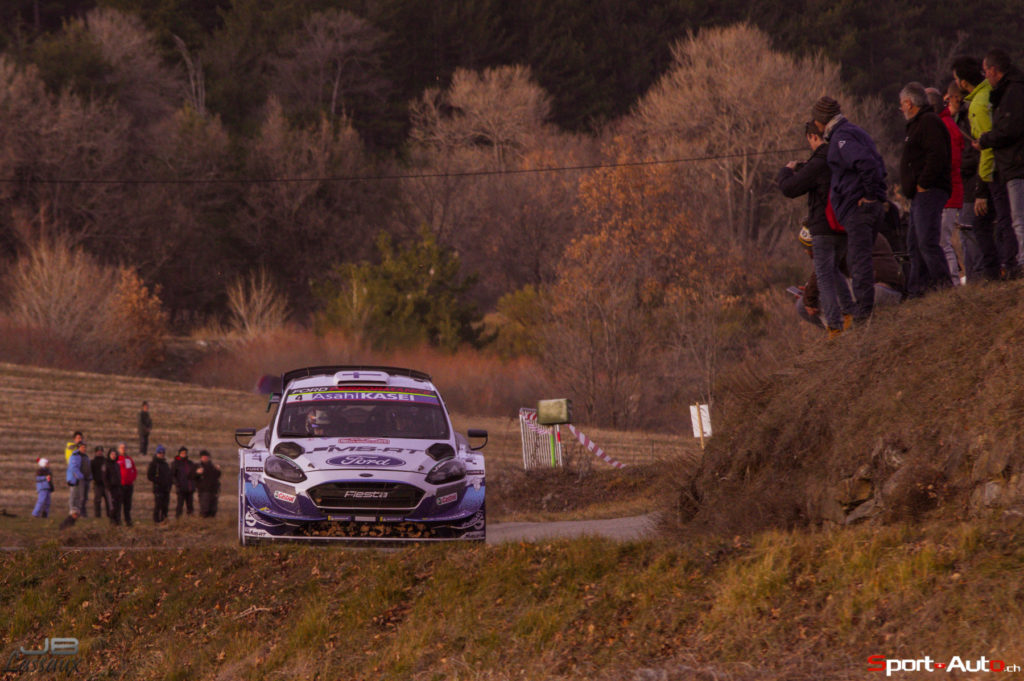 Finding more grip behind the wheel of the Fiesta and more precise information from their route note crew, the Finns set a string of fourth-fastest times and reduced a 50 second deficit to just a handful of seconds over today’s 75.2 kilometres.

With another 63.54 kilometres left to contest, Lappi has every chance of overhauling the seven-time Monte winner. And whatever the outcome, he remains on course to secure his personal best Monte result.

Teemu Suninen showed good speed behind the wheel of his Fiesta through dry, wet and muddy conditions today, but as the road became icy he struggled to maintain the same level of confidence.

Looking forward to more consistent conditions tomorrow, the young Finn will also want to bring his Fiesta to the end as M-Sport Ford are on the verge of an historic 250th consecutive point-scoring finish – a record co-driver Jarmo Lehtinen has had an instrument hand in securing.

Restarting this morning, Gus Greensmith and Elliott Edmondson gained experience and confidence with every stage. Despite a steady start, the young Brit impressed with his ability to bounce back from yesterday’s disappointment and posted the fifth fastest time on SS10.

But with only 60 cars permitted to restart in the Principality, his Rallye Monte-Carlo effectively came to an end this evening – his top-specification Fiesta remaining in parc ferme for the Monegasque crowds to admire tomorrow.

Team Principal, Richard Millener, said: “It was great to see Esapekka finding some more confidence behind the wheel today, and he’s managed to rein Sébastien Loeb in from 50 seconds to just 14 seconds – which is pretty good going! It’ll be interesting to see how that one plays out tomorrow. Of course Loeb is something of a master on those stages, but if Esapekka’s confidence continues to grow then I wouldn’t bet against him either! It was also good to see Teemu setting some good split times, but he knows he was too cautious on the icy sections. It’s hard when you’re not really in a fight and thinking about bringing the car home to the finish, but hopefully we’ll see some more consistent conditions tomorrow for him to show what he can do. Gus also had a strong day. He was fairly devastated about what happened yesterday, but he picked himself up and just got on with rebuilding that confidence. He took it steady over the first stage, but then he was fifth fastest on the next one – which was pretty impressive considering how little experience he has. He won’t be competing in Monte tomorrow, but we’ve sent the car down to parc ferme to safeguard what’s set to be a really special and historic moment for the team.”

Esapekka Lappi (5th) said: “Everything felt much better this afternoon. We made some changes to the car which delivered a lot more grip, and also the information from the route note crews was much more precise. That brought a lot more confidence, and we were able to set some much better times and get a lot closer to Loeb ahead. But still 14 seconds is a lot to find when you’re talking about the nine-time World Champion! I think he knows tomorrow’s stages better than anyone so I’ll just focus on myself and hopefully we can show another improvement.”

Teemu Suninen (11th) said: “Our pace was pretty good on the sections that were dry, wet or muddy, and I set some top-three times through those splits. But I lost a lot of time on the icy sections – especially when on the slicks. Maybe it was because I know I have to bring the car home to the finish, but still we could have gone faster. Experience always helps though, and I think we made some good tyre choices throughout the day so I was pleased with that.”

Gus Greensmith (66th) said: “Considering how much work went into the pre-season it’s fair to say that my confidence was pretty shattered yesterday. I think it was the lowest point in my career, so today was all about rebuilding that. I was in no mood to make any mistakes through the first stage, but then I got back into things and managed to set the fifth fastest time in the next one. Then after that, I became a bit of a slush plough for the guys behind – but you’ve just got to pick yourself, keep working hard, and one day it’ll all come good.”