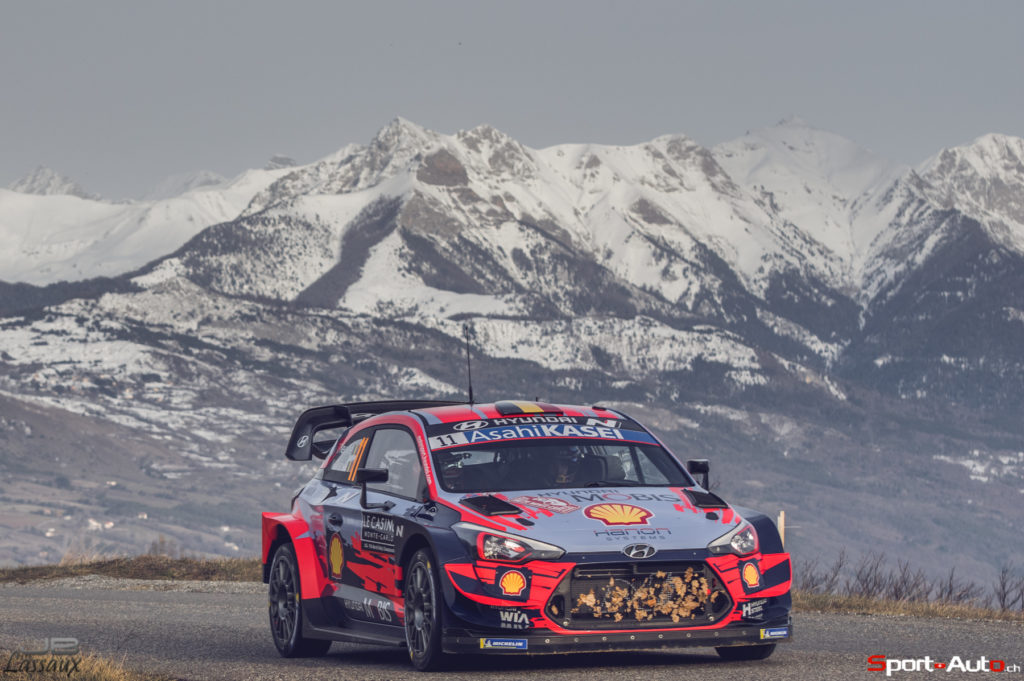 Hyundai Motorsport has registered its first win of the 2020 FIA World Rally Championship (WRC) as Thierry Neuville stormed to victory with a dominant performance on the final day in Rallye Monte-Carlo.

The Belgian, alongside co-driver Nicolas Gilsoul, claimed a clean sweep on Sunday morning with four stage wins and the maximum five Power Stage points to take the team’s 15th WRC win and its first-ever in the Principality. The crew scored a total of nine stage wins from a possible 16 over the four-day event.

Neuville put in an exemplary performance all weekend to get the maximum from his Hyundai i20 Coupe WRC in some typically challenging Monte conditions. Having cemented a 6.4-second gap to the leaders by the end of Saturday, he cut the deficit on Sunday’s opening stage before moving into the lead and then extending his own advantage to 12.6-seconds with a Power Stage win. The result marked the 13th WRC career win for the #11 crew.

A demanding event came to a frustrating end for Sébastien Loeb and Daniel Elena as they had to settle for sixth overall. The crew opted for softer tyres to tackle the two loops, which proved to be disadvantageous in the conditions. Adding to their struggles, while battling to defend fourth place, they lost the rear of their car at a tight hairpin in SS14, requiring spectator support to get them back on the road. They lost crucial time and dropped down the order, as they struggled with their tyre choice. Nonetheless, they were able to salvage ten important championship points.

Hyundai Motorsport has taken an early lead in the manufacturers’ classification on 35 points, while Neuville starts the 2020 season atop the drivers’ table with the maximum 30 points on offer. 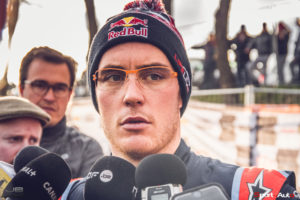 Neuville said: “This is an amazing way to start the season and a fantastic feeling. I am really pleased that we have finally taken victory in Monte-Carlo; it’s been something we’ve chased for a while. We’ve come close before but now we’ve done it. It has not been an easy weekend, but I have picked up confidence as the event progressed, working very closely with the team and my gravel crew, who have done a great job. We’ve really been able to increase our feeling and comfort in the car the past few days. I could really push, and we’ve seen the results from the stage times. We were also able to take maximum points in the Power Stage. Our 13th WRC win – such a lucky number! My thanks to the whole team, it’s the perfect way to start a new season.”

Loeb said: “This has certainly not been the rally we were hoping for; it has been a difficult one all weekend and it seems the planets were not aligned for us. We were going OK until the second day but then yesterday we were backed up. Today was all about our tyre choice, which was not the right one for the conditions. We were already struggling at the end of the first stage, and I made a mistake at a tight hairpin in the second stage because I had no front grip. We just had to complete the rally, conserving our tyres to make it to the end. It’s not nice to tackle stages in that way but it was all we could do. We never give up. Huge congratulations to Thierry, Nicolas and the entire Hyundai Motorsport team for the victory. It takes something to win Rallye Monte-Carlo, so just enjoy these moments.”

Team Principal Andrea Adamo: “There are so many things going through my mind at the moment. It is so meaningful for me personally to win Rallye Monte-Carlo. Alongside San Remo, it was one of the events that first attracted me to this sport, so to see a Hyundai with Thierry and Nicolas on the top step of the podium is something special. The Hyundai Motorsport team has grown a lot in the past twelve months. I remember after finishing second last year, listing all the things on which we needed to work on and the areas in which we needed to improve. My people have done a great job filling in those gaps and have shown this weekend what they are capable of. We have to also consider looking at the performance of Séb and Danos today, affected no doubt by their tyre choice, that we are not perfect. We have to strive for perfection, but for now we will celebrate this victory.”

2020 FIA World Rally Championship for Manufacturers’ Standings
After round 1

2020 FIA World Rally Championship for Drivers’ Standings
After round 1 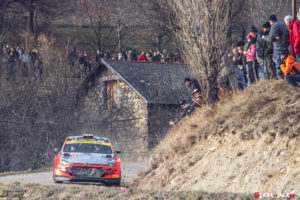 Hyundai Motorsport’s WRC 2 crews endured the highs and lows of Rallye Monte-Carlo in the opening round of the 2020 FIA World Rally Championship (WRC) and their first competitive event in the upgraded Hyundai i20 R5 ’20.

Ole Christian Veiby showed encouraging pace while fighting for the lead, with two WRC 2 stage wins over the weekend, but retired on the final morning. Nikolay Gryazin, meanwhile, finished third in the category and 16th overall, in his first-ever Monte. It was a valuable learning experience for the crews in the Pirelli-shod car, run on behalf of Hyundai Motorsport by RedGrey Team.

Veiby and Gryazin were joined by their respective co-drivers Jonas Andersson and Yaroslav Fedorov for the 16-stage event, which saw a complete range of weather and road conditions over the four-day schedule.

Thursday evening saw two night-time stages (SS1 Malijal-Puimichel, SS2 Bayons-Bréziers) in slippery conditions before the first full day of action on Friday. A repeat loop of three stages (Curbans-Venterol SS3/SS6, Saint-Clément-Freissinières SS4/SS7 and Avançon-Notre-Dame-du-Laus SS5/SS8) allowed the two crews to get their first complete taste of the Hyundai i20 R5 ’20 on the longest individual day of the event.

The combination of St-Léger-les-Mélèzes-La Bâtie-Neuve (SS9/SS11) and La Bréole-Selonnet (SS10/SS12) on Saturday saw fast changing conditions with melting ice requiring a tactical and cautious approach from the drivers and co-drivers. Sunday’s itinerary was no less demanding with the scheduled runs through La Bollène-Vésubie – Peïra Cava (SS13/SS15) and La Cabanette-Col de Braus (SS14/SS16) offering a final challenge, one which unfortunately caught out Veiby.

Earlier in the event, he had been quickly on the pace against experienced rivals, claiming a WRC 2 stage win in SS3 to move into the category lead with Gryazin right behind. Unfortunately, the Norwegian felt Monte’s bite in SS6 as a puncture lost him two minutes of time. He was still able to retain second, just ten seconds behind the leader, Mads Østberg, with the crew’s Russian team-mates in third.

Hopes of victory were dented on Saturday as Veiby spun on the final stage of the day (SS12). Gryazin, too, lost time through a mechanical issue in SS10, but the two crews retained their second and third places. As action moved back towards Monte-Carlo on the final morning, Veiby saw his chances of a victory fight fade away, and ultimately crashed out in SS14, forcing cancellation of the stage. Gryazin completed the rally inside the WRC 2 top-three, scoring points for Hyundai Motorsport N.

Gryazin said: “I am pleased to finish our first rally with Hyundai Motorsport, especially considering this was our first time in Monte-Carlo with the Hyundai i20 R5. It was not an easy event with lots of muddy conditions, as well as ice, snow and slush. While it was tricky, we had a valuable experience getting to know the car. We didn’t push too much, as our objective was to finish the rally and to take some points away, which we achieved. I was sorry to see Ole Christian stop in SS14 today; he did a good job all weekend. I would like to extend my thanks to RedGrey Team, to Hyundai Motorsport and to the gravel crew for their help and guidance. We also appreciate the support from the Russian fans, many of whom follow on WRC Plus. We will try to improve at the next event.”

Veiby said: “That was not the ending we wanted for Rallye Monte-Carlo. It started well today, but on SS14 I had a little too much speed going into a corner, where it was damp, went wide, hit some rocks and knocked off the right rear wheel. It was stupid really, and my mistake. The rest of the weekend has been good, though! We have been right there on the pace on every stage, and we felt really comfortable in the car. Such a shame with the puncture, as we were in a tight battle for victory in the WRC2.  We have settled in well with the new team, and even our tyre choices went well with the new tyre supplier. Both Jonas and I feel we have been competitive all weekend, and that is promising ahead of the next round. Big thanks to RedGrey Team and Hyundai Motorsport for their support and effort! And, also, to our route note Crew, PG Andersson and Stig Rune Skjærmoen; both did an excellent job.”

Hyundai Motorsport Team Principal Andrea Adamo: “I think we have shown that our Hyundai i20 R5 has definitely improved its performance level. The job carried out by the Hyundai Motorsport Customer Racing engineers on the upgraded ’20 specification car has been very well done. Honestly speaking, the drivers’ performance this weekend has not really been up to our expectations, but we are looking forward to seeing a big improvement on that front in the next round.”

Next rally
The second round of the 2020 FIA World Rally Championship, Rally Sweden, will take place February 13-16.

2020 WRC 2 Championship for Drivers’ Standings
After round 1

2020 FIA WRC 2 Championship for Teams’ Standings
After round 1