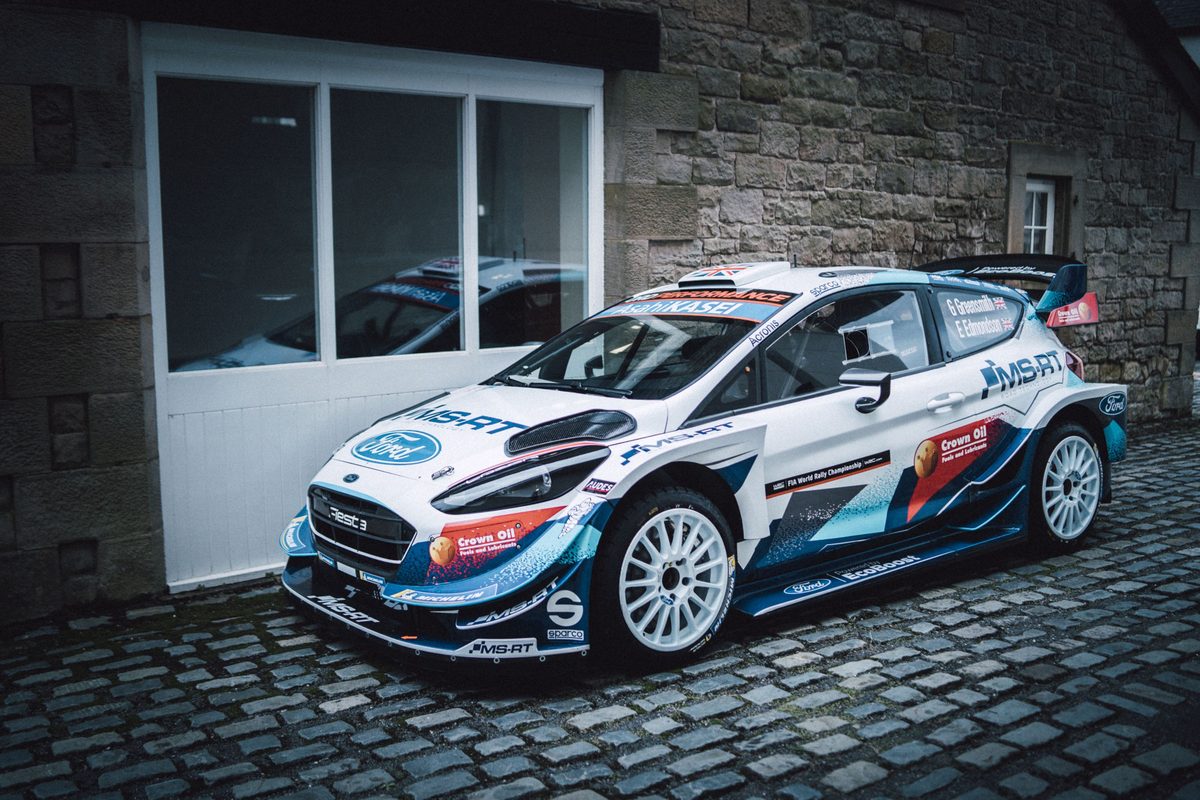 M-Sport Ford World Rally Team’s young squad are ready to take their chance as the FIA World Rally Championship returns to action at next week’s Rallye Monte-Carlo – an event the EcoBoost-powered Ford Fiesta WRC has won twice in the past three years.

The traditional start to the season is one of the most demanding on the calendar and, as WRC 3 driver ‘PEDRO’ so aptly described, ‘the changeable weather can be as unpredictable as the roulette wheel.’

The mountainous stages offer everything from dry asphalt to full ice and snow, and the crews must master these challenges in darkness as well as daylight. In these varied conditions it’s often the best compromise that delivers, but confidence behind the wheel is also a must.

Building that confidence during a four-day test earlier this month, Esapekka Lappi, Teemu Suninen and Gus Greensmith got to grips with the top-specification Fiesta and are ready to get their 2020 season off to a strong start.

With an average age of just 25, this year’s driver line-up looks to the future but there is also a nod to the past with two Finns behind the wheel of the #3 and #4 Ford for the first time since 2011 – both keen to deliver and maybe even replicate the success of fellow Finn Marcus Grönholm who powered his Ford Focus RS WRC to victory at Rallye Monte-Carlo in 2006.

Team Principal, Richard Millener, said: “I’m really looking forward to this season and excited to see what we can do over the next 12 months. We’ve got a young team, but it’s also a very experienced and ambitious one and I think we have every chance of bringing home some victories this year. There’s no tougher start than Rallye Monte-Carlo, but we’re definitely up for the fight. And looking at some of the videos from our pre-event test, Esapekka, Teemu and Gus are fairly rapid behind the wheel of the Fiesta – so I’d say we have as good a chance as anyone when it comes to securing a strong result next week.”

Ready for their first competitive outing with the Ford Fiesta WRC, Esapekka Lappi and co‑driver Janne Ferm are geared up for the start of an exciting new season. Having contested Rallye Monte-Carlo on four previous occasions, the Finns have good knowledge of the event’s demanding stages and will be looking for a positive start as part of the M-Sport family. Finding confidence behind the wheel of the Fiesta on their pre-event test, the pairing are keen to see that continue and aim to challenge for a strong result straight out of the box.

Esapekka Lappi said: “Monte-Carlo is always a tricky start to the season, but I’m looking forward to getting started. Straight away the Fiesta felt very logical and easy to drive, and that always gives a driver a lot of confidence. I hope I’ll be able to use that confidence next week, but Monte is always a challenge and you never know what to expect. We had wet roads on the test and the car felt good in those changing conditions. But in Monte you can have wet roads, dry roads, icy roads, full snow, and sometimes all of that in the same stage! You have to give this rally a lot of respect, but that’s what we plan to do and we want to get this new partnership off to a strong start next week.”

Starting his second full season in the FIA World Rally Championship, and first alongside experienced co-driver Jarmo Lehtinen, Suninen is ready to make his mark. The young Finn has the speed, and is keen to develop a consistency that will see him challenge for the top results more regularly. Rallye Monte-Carlo is always a challenging start to the season, but Suninen has top-three form having secured the third step of the WRC 2 podium in 2018. Some competitive times followed as he took to the wheel of the Fiesta WRC last year, and he’ll want to build on that in 2020.

Teemu Suninen said: “I’m really looking forward to this season and straight away I could see that Esapekka and I would work well together. We had a very similar set-up on the test, and it looks like we want to take the car in the same direction. I tested on dry asphalt and had a really good feeling, but for the more tricky sections where there is a lot of ice and snow I will have to rely on my experience. This is my fourth time in Monte so I’m starting to know the stages a bit better. The rally is always a lottery, but I have a very experienced gravel crew who I trust 100 percent – so anything is possible!”

Gus Greensmith is the perfect example of Ford’s ‘Ladder of Opportunity’ in action, and nowhere is that more apparent than in his previous starts at Rallye Monte-Carlo. The youngster got his first taste of the Monegasque roads with the Ford Fiesta R2 in 2018. Progressing to the Ford Fiesta R5 last year, he claimed his maiden victory with an impressive performance; and this year he and co-driver Elliott Edmondson return to contest one of the most legendary events on the calendar with the power and performance of the EcoBoost-powered Ford Fiesta WRC.

Gus Greensmith said:“Monte is a special one for me. It’s where I claimed my first victory, and there’s no other rally than gives me more satisfaction behind the wheel. Knowing that I will drive these amazing stages with the Ford Fiesta WRC this year is beyond my wildest dreams! Everyone wants to win here, and the changing conditions make it one of the biggest challenges on the calendar. The smallest mistakes pay a heavy price, but I do think this is a strong event for me. I’ve always relished tricky conditions, but experience is something you need here too. I’ll have to make up for that, and hope to produce a strong performance to kick off this 2020 season.”

M-Sport Ford World Rally Team will field three EcoBoost-powered Ford Fiesta R5 MkIIs as the FIA World Rally Championship returns to action at next week’s Rallye Monte-Carlo – Adrien Fourmaux and Rhys Yates in WRC 2, and ‘PEDRO’ in WRC 3. Each have previous experience of this challenging event, and the WRC 2 contenders have proven form.

Making his world-stage debut at the event last year, Fourmaux and Belgian co-driver Renaud Jamoul brought their Fiesta R5 home in an impressive second place in the WRC 2 category. Yates finished the same event just shy of the podium with legendary French co-driver Denis Giraudet and will contest this year’s event alongside Welshman James Morgan.

Team Principal, Richard Millener, said: “Rallye Monte-Carlo is one of the most demanding events on the calendar, but when you get it right it’s also one of the most enjoyable and I hope all three of our Ford Fiesta R5 crews have an enjoyable rally next week. They all have some experience of this event from last year, and they’ll be able to use that to their advantage – as well as this weekend’s pre-event test where they’ll get a feel for the Fiesta and some of the conditions we can expect out on the stages. The WRC 2 and WRC 3 classes have never been so competitive, and that’s great news for the sport. All three of our crews have their own goals and ambitions ahead of this iconic event, and we’ll give each of them everything they need to achieve those goals.”

Adrien Fourmaux (WRC 2) said: “Rallye Monte-Carlo is one of the most difficult events on the calendar. Every year the weather provides a really big challenge, and the rally is famous for its tricky conditions and the wonderful stories they create every year. It’s important to make the right tyre choice. But sometimes you will have the worst choice for the first stage and the best choice for the next two – so it’s all about compromise and finding the best option for the whole loop. Before my rally debut three years ago, I came to spectate here and it’s also where I made my FIA World Rally Championship debut last year – so it’s a really special place for me. Last year on my debut we finished second in WRC 2 and tenth overall. This year I have more experience and want to fight for the podium – and why not my first category victory! Whatever happens this is a great opportunity for me, and I’m really looking forward to being part of this big team – so a big thanks to everyone at M-Sport, the French Federation and my sponsors Yacco and Michelin.”

Rhys Yates (WRC 2) said: “This year is a massive opportunity for me and of course I want to make the absolute best of it. But at the same time, this is only the second time I’ve started Rallye Monte-Carlo – an event where experience is everything. I start this rally with my sights set on the finish, but I’m sure there will be some sections where I can push on too. These are the target areas we use to monitor our progress in terms of progression in performance. Last year we were in the amateur class and now we’ve moved up to the pro section. We’re just one step down from the top flight so there’s no denying the competition’s going to be tougher this year. It’s going to be hard, but we have to take on the best to improve ourselves. Monte’s a massive journey into the unknown. We’ve got no idea of what’s coming in terms of the weather, the conditions or the grip. Every corner’s going to be an adventure. But let’s see what happens.”

‘PEDRO’ (WRC 3) said: “The weather at Rallye Monte-Carlo is as unpredictable as the roulette wheel, and you never know what will happen. It’s no coincidence that this is considered one of the most challenging events on the calendar and it will be important for us to get a good feeling during our pre-event test this weekend. Having to go from dry asphalt to full ice and snow in a single stage makes this a very difficult rally – but that is also part of its charm and why everyone loves it so much.”