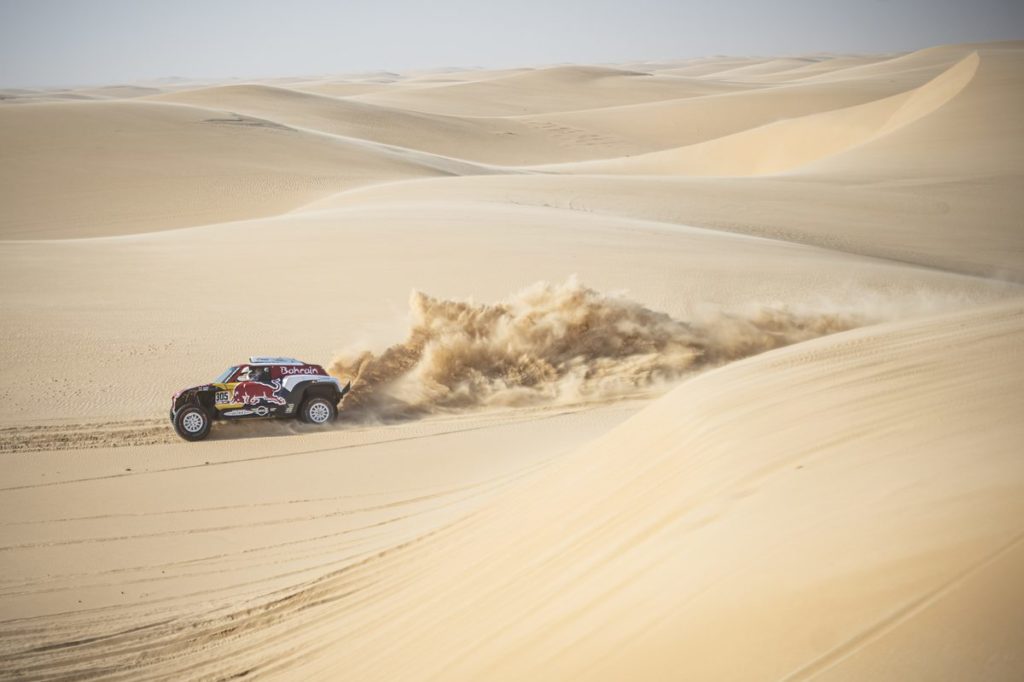 The 2020 Dakar Rally once again proved itself the toughest motorsports race out there on day 10 as it waved competitors off for a two-part marathon stage. The first leg of the marathon took place between Haradh and Shubayta, taking the convoy over the perilous dunes of Saudi Arabia’s Empty Quarter.

Things had started to get a little uncomfortable for car race leader Carlos Sainz (ESP) during the Dakar’s second week. His lead of 10 minutes had been cut to just 24 seconds. However, on Stage 10 the Spaniard was once again able to increase his advantage at the front of the race.

“One waypoint was difficult but somehow we managed to get it. Everything worked fine for us.” – Carlos Sainz

Sainz’s lead now stands at over 18 minutes with Nasser Al-Attiyah (QAT) still lodged in second overall. After Al-Attiyah comes Stéphane Peterhansel (FRA), just 16 seconds behind the reigning champion in third overall. Al-Attiyah and Peterhansel are both left to ponder if today’s navigation mistakes have cost them the win at the first Dakar held in the Middle East.

“We took a wrong turn which gave us 20 kilometres extra to drive. We lost 19 minutes on Carlos (Sainz) but this is how it goes. We still have a long day tomorrow and everything is still possible.” – Nasser Al-Attiyah

“There were a lot of drops and it was hard to understand which dunes are sharp and which are rounded. We did a good job, kept a strong rhythm and we’re happy to finish this stage.” – Kuba Przygonski

Racing on Stage 10 was halted at the 345-kilometre mark as a safety precaution due to extremely high winds on the track. As a consequence there were no major gains in the bike race, with leader Ricky Brabec (USA) protecting a lead of 25 minutes with two stages remaining.

Red Bull KTM Factory Team trio Toby Price (AUS), Matthias Walkner (AUT) and Luciano Benavides (ARG) will look to make a late charge for the lead on Stage 11, the second part of the marathon stage. Price, Walkner and Benavides are fourth, sixth and seventh respectively in the general classification.

“It was really fast in the broken dunes at the beginning. Then we came to a section that was tough navigation, very tricky. Many people got lost here, but I managed to do well.” – Luciano Benavides

“I’m happy to be here safe and I’m looking forward to getting to the finish line.” – Laia Sanz

The side-by-side stage was once again dominated by Red Bull Off-Road Team USA as they picked up a second consecutive 1-2 result. This time it was Mitch Guthrie Jr. (USA) winning the stage, the third of his debut Dakar.

“We went 1-2 again so it’s another successful day. It’s marathon stage so tonight we’ll be prepping the cars for tomorrow.” – Mitch Guthrie Jr.

Blade Hildebrand (USA) followed home his team-mate Guthrie Jr. in second as the pair continue to get the most out of racing in the Dakar Experience class. In the SxS general classification it looks as though a Stage 10 wheel change has cost defending champion Chaleco Lopez (CHI) the chance of collecting back-to-back titles.

Stage 10 even delivered drama in the quad race where Ignacio Casale (CHI) saw his lead cut by nearly half an hour. Two-time Dakar champion Casale’s advantage now stands at just over 16 minutes, with Simon Vitse (FRA) on a mission to chase him down.

“It was a stage to forget. After 200 kilometres, I got lost for around 40 minutes. I made a mistake that I shouldn’t have made. It’s very serious because it could have cost me victory on the rally.” – Ignacio Casale

“It was an interesting stage with some dangerous parts where the dunes dropped sharply. With the weather conditions how they were the race organisers decided it was not possible to finish the stage.” – Anton Shibalov

The competitors left in the Dakar are on their own tonight in Shubaytah, denied the assistance of their mechanics. They’ll need to fix any problems on their machines themselves before racing 379 kilometres back to Haradh tomorrow on Stage 11.