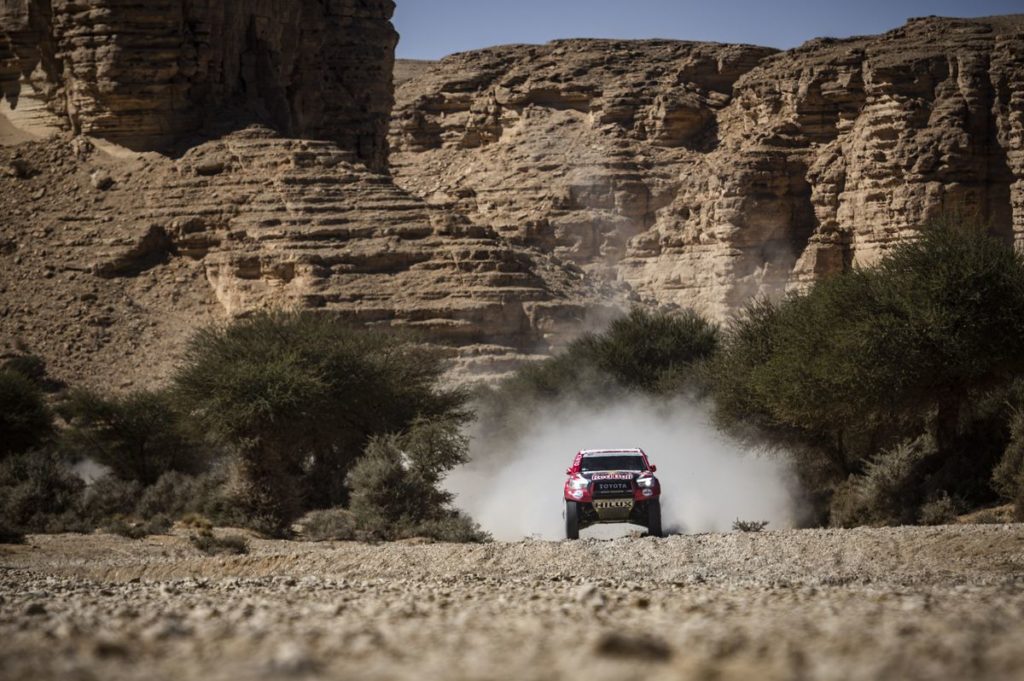 The 2020 Dakar Rally served up a mammoth Stage 9 which had competitors on the road for nearly 900 kilometres. The trip east from Wadi Al-Dawasir to Haradh included a 415-kilometre timed special stage that saw race leaders come under severe pressure.

The margins were dramatically squeezed in the car race as front runner Carlos Sainz (ESP) saw his advantage significantly dented. Sainz has led the general classification since day three, but his cushion is down to a mere 24 seconds following Stage 9.

“On the first part we lost a little bit of time when we lost the way – we lost five minutes or something like that. After, I don’t know what happened… the tread came off the tyre and we had to stop. It was not a good day for us.” – Carlos Sainz

It’s none other than reigning car champion Nasser Al-Attiyah (QAT) who is breathing down the neck of Sainz in second overall. Also closing in is Monsieur Dakar himself, Stéphane Peterhansel (FRA) who set the fastest time today. Peterhansel stays third overall, only 6m38s behind fellow Mini Buggy driver Sainz.

“It looks like the three cars are very close together. For all three of us, it is possible that one can win the Dakar.” – Nasser Al-Attiyah

Kuba Przygonski (POL) enjoyed one of his best day at the 2020 Dakar with fourth place on the stage. 2009 Dakar winner Giniel De Villiers (ZAF) brought his Toyota Hilux home with the eighth fastest time on Stage 9.

“We had a good day and attacked from the word go. The first part was very technical and great fun. After a fast section, the route headed into the sand, where it was very rocky.” – Kuba Przygonski

The good news keeps coming for Red Bull Off-Road Team USA on the second week of the Dakar. Not only did they make it a third consecutive side-by-side stage win between Wadi Al-Dawasir and Haradh, but they also secured their first 1-2 stage result of the Dakar. Stage winner Blade Hildebrand (USA) was followed home a minute later by team-mate Mitch Guthrie Jr (USA).

“It’s always good to have those days where you can set the pace for the rest of the pack. That’s exactly what we did today.” – Blade Hildebrand

While Hildebrand and Guthrie compete for stage wins in the Dakar Experience class, it’s still all to play for in the general classification. Second placed Chaleco Lopez (CHI) trails SxS race leader Casey Currie (USA) by less than 24 minutes.

Bike race leader Ricky Brabec (USA) was another who was reeled in as the category resumed on Stage 9. Defending champion Toby Price (AUS) was the among the chasing pack who closed the gap on Brabec on the way to Haradh. Price is now 26m43s behind Brabec and has climbed to third overall.

“You have your good moments and you have your bad ones and unfortunately 2020 hasn’t quite been good for us but we’ll still keep giving it a good fight and see how we go.” – Toby Price

“It was really not the best day for me. I didn’t feel so well already at the beginning. I struggled a bit on the rocky and stony tracks with the bike. Then it got a little bit better, but, for sure, it was not one of my best days.” – Matthias Walkner

“I enjoyed the beginning of the stage because it was more technical. Then after the refuelling it was just flat out, full gas.” – Laia Sanz

“We finished the stage together. It was like this the whole day, we drove together with Anton Shibalov. He had a puncture at the beginning of the stage and we helped him.” – Dmitry Sotnikov

Ignacio Casale (CHI) still has control of the quad race with three stages left at the Dakar. Casale’s fourth stage win of the 2020 Dakar has stretched his lead to 45 minutes as he hunts down a third quad bike title.

“I found it difficult with the wind, it slowed me down quite a bit, but I didn’t have any real problems on the stage, no falls, no mechanical issues or navigation mistakes. We’re getting a little bit nearer to the end.” – Ignacio Casale

The challenges continue to pile up at the 2020 Dakar with tomorrow’s journey to Shubaytah being the first half of a two-part marathon stage. Competitors will be separated from their mechanics overnight and forced to make any repairs necessary themselves, and that’s after 534 kilometres of desert racing!