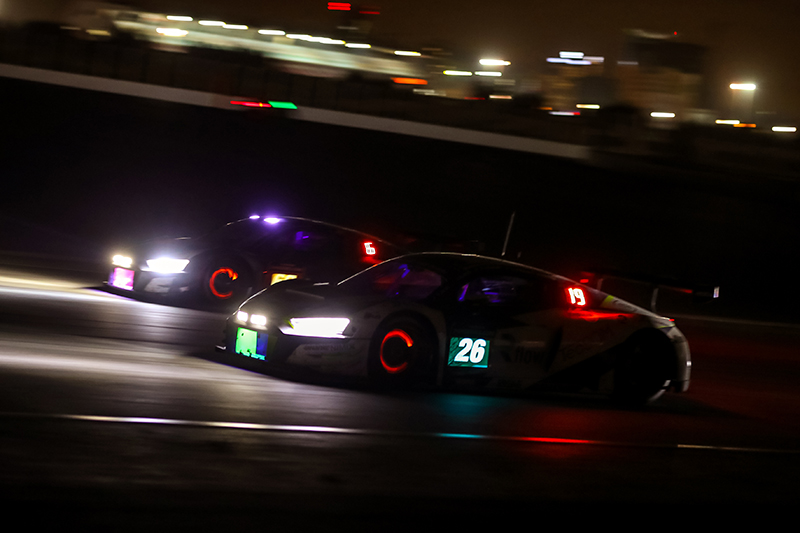 Gradually, it has become a tradition like the New Year’s Concert in Vienna or the ski jumping in Garmisch-Partenkirchen: for the 15th consecutive year, Dubai Autodrome will be hosting the 24H DUBAI, the opening round of the 2020 24H SERIES Continents . From 7 until 11 January, the state-of-the-art circuit in the United Arab Emirates will be a heave of motor racing activity with a packed grid of GTs and touring cars for the 24-hour race, a six-hour race on Tuesday evening as a flyaway round of the Dutch Winter Endurance Kampioenschap (WEK) and thrilling single-seater action with the F3 Asian Championship and FIA F4 UAE. The 15th running of the event will be celebrated in style!

First held in 2006, with current Mercedes motorsport boss Toto Wolff in the winning team of the inaugural running, the 24H DUBAI has become one of the well-established endurance classics in motor racing. The event started off as a rather small initiative by two Dutch amateur racers, Ivo Breukers and Gerrie Willems, who set up their agency CREVENTIC to organise endurance races, leading to the current 24H SERIES Continents and 24H SERIES Europe. The race in Dubai is the flagship of the series and has attracted many famous motor racing stars over the years. Yet, the organisers never lost their focus on club and amateur racers, who have always been the backbone of the event. The convivial atmosphere in the sun of the United Arab Emirates is one of the key factors for the ever-increasing popularity of the event.

The 15th running of the 24H DUBAI shines with a packed grid of 52 GT cars and 22 entries in the TCE division with teams and drivers coming from all over the world to race in Dubai. In total, 22 GT3 cars with customer teams from Audi, BMW, Lamborghini, Mercedes-AMG and Porsche have been entered in the GT3 class, split among a Pro and an Am category. Last year’s race-winning team, Audi outfit Car Collection Motorsport, is returning to Dubai with a line-up that includes Rik Breukers, Christopher Haase and Dimitri Parhofer, who were among the winning drivers last year. They are now partnered by Mike David Ortmann and Markus Winkelhock. Further former overall winners of the event seeking repeated glory in Dubai are Black Falcon (Mercedes-AMG), Herberth Motorsport (Porsche) and WRT (Audi). The WRT line-up includes Mirko Bortolotti, who claimed pole position in Dubai in the past two years and has now made the transfer from Lamborghini to Audi. Black Falcon’s Jeroen Bleekemolen and Hubert Haupt are two-time Dubai race winners while local expectations are high for UAE-driver Khaled Al Qubaisi. UAE honours are also upheld by Porsche team GPX Racing, famously having won the Spa 24-hours last year, with a line-up that includes Porsche factory drivers Dirk Werner and Julien Andlauer, the former one of the Dubai race winners in 2007. Former ADAC GT Masters champion Maximilian Götz is one of the drivers in the HTP Winward Motorsport team while former FIA GT World Cup winner Maro Engel is racing for the Toksport WRT team. While not driving himself, two-time Le Mans winner Earl Bamber, meanwhile, is running a Porsche in the GT3-Am class under the banner of his eponymous team.

The GTX class has seven entries with a Vortex, a Lotus, two Lamborghinis, a Mercedes-AMG and two MARC silhouette cars, one of them latter car entered by Cor Euser Racing, the Dutch team that has been racing in Dubai every year since the inaugural edition in 2006. As usual, fierce competition can be expected in the 991 class with no less than eleven Porsche 991 Cup cars having been entered. A dozen of cars from teams representing Aston Martin, Audi, BMW and Mercedes-AMG will be competing in the GT4 class, drivers including former overall Dubai race winner Gabriele Piana and ex-DTM racer Rahel Frey.

With 16 cars entered representing Audi, Cupra, Honda, Peugeot, Seat and Volkswagen, the TCR class spearheads the TCE division for this year’s 24H DUBAI. Last year’s Dubai race winners, Swiss team Autorama Motorsport by Wolf-Power Racing, are back with two Volkswagens, but interestingly, Swiss Yannick Mettler is the only driver who has been retained from last year’s line-up. Dutch teams Bas Koeten Racing (under the TOPCAR Sport and NKPP Racing banners) and Red Camel-Jordans.nl, German team Bonk Motorsport and Belgian outfits QSR Racing and AC Motorsport, all having enjoyed previous success in CREVENTIC races, are back in Dubai as well. An interesting entry is also the all-Hungarian line-up of Zengo Motorsport, team owner Zoltán Zengö being the one who discovered the talent of a certain Norbert Michelisz in online racing that eventually led to Michelisz’s recent FIA WTCR title win.

With one Ligier JS2 R entered by Nordschleife Racing and two Ginettas from CWS Engineering, two famous sports car brands are represented in the TCX class. Three BMW M240i Racing Cup cars in the TC class, meanwhile, round out the touring car field.

On Wednesday, there will be a parade of race cars from Dubai Autodrome through the adjacent Motor City district including an autograph and interview session with drivers. To celebrate the 15th running of the event, the traditional Welcome Barbecue will be held on the main straight of Dubai Autodrome on Wednesday evening. There is a packed support programme with a six-hour race as a round for the Dutch Winter Endurance Kampioenschap on Tuesday as well as four races for the FIA F4 UAE series and three races for the F3 Asian Championship. 24H SERIES action starts with free practice on Thursday, 9 January from 10.20-11.50 hrs, followed by qualifying for the TCE division from 15.05-15.35 hrs and for the GT division from 15.40-16.10 hrs. Night practice is scheduled from 18.00-19.30 hrs. Warm-up is held on Friday, 10 January, from 10.30-11.00 hrs. Pre-race activities get underway at 14.00 hrs, the race starts at 15.00 hrs.

Activities can be followed on the series’ website www.24hseries.com with live timing and streaming with commentary from the Radio Show Limited team, well-known from IMSA Radio and Radio Le Mans. The stream is also available on the series’ YouTube channel and Facebook page as well as motortrend on Demand. Regular updates are also available on Facebook, Twitter and Instagram. is the official title sponsor and the exclusive tyre partner of the event. Stand 21 racewear, DRD international for screen printing, Speedcom for radio equipment and Racing Sportiva for helmets, gear and equipment are present with sales and service booths in the paddock at Dubai Autodrome. Further event partners are Webheads, Bugatti Shoes, Sonic, Rebellion Timepieces and Trees for the future. For every lap completed in the race, one tree will be planted, an initiative that will compensate more than twice the total fuel consumption of the event. Further information can be found at: www.24hseries.com.