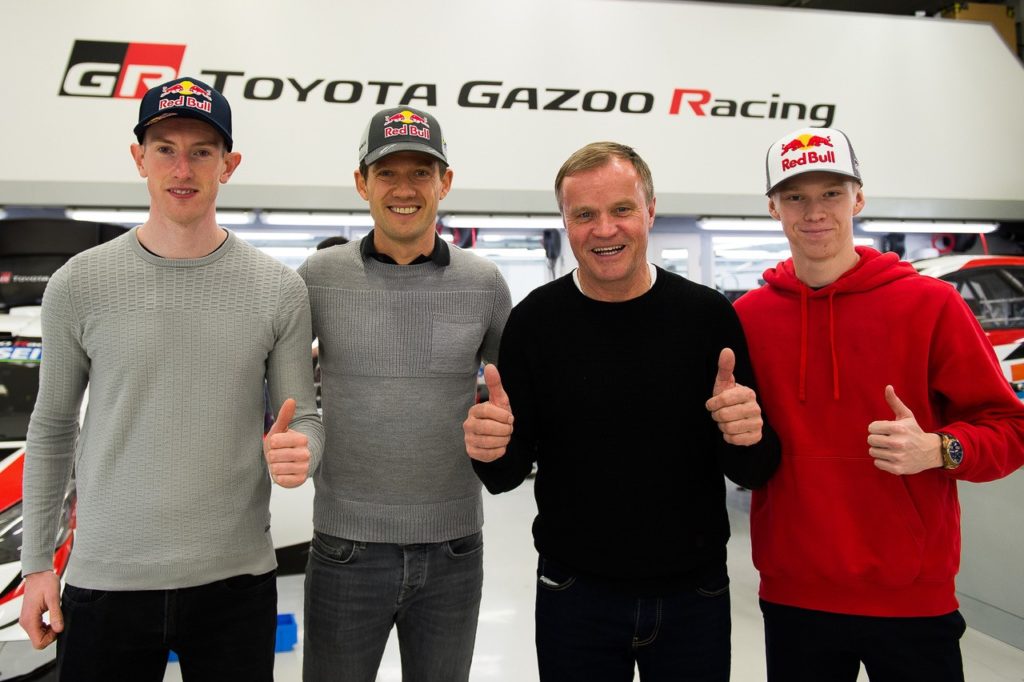 The Toyota Gazoo World Rally Team is pleased to confirm an exciting, all-new driver line-up for the 2020 season. Six-time FIA World Rally Champion Sébastien Ogier, proven rally winner Elfyn Evans and rising star Kalle Rovanperä will all join the team along with their respective co-drivers. Together, they will make for a perfect blend of speed, experience and youth behind the wheel of the Toyota Yaris WRC.

Ogier, guided by co-driver Julien Ingrassia, established himself as the dominant force in the WRC as he won six consecutive drivers’ titles between 2013 and 2018. Hungry to reclaim his crown and add to his tally of 47 victories, the 35-year-old from France has signed with Toyota for the 2020 season, placing his trust in the car and team that won the 2019 drivers’ championship with Ott Tänak.

While his maiden victory came on home soil in Wales in 2017, Evans has proven himself as a fast and consistent driver across the wide variety of different surfaces and conditions experienced in the WRC. Joining Toyota for the next two years, the 30-year-old and his co-driver Scott Martin will continue the strong working relationship they started in 2019.

Rovanperä will embark on his rookie season in a World Rally Car in 2020 aged just 19, but the youngster from Finland has long been regarded as one of the sport’s most exciting prospects. Having previously had the chance to test the Yaris WRC as a 16-year-old, he has now signed a two-year contract with the team. Together with co-driver Jonne Halttunen, Rovanperä won the 2019 WRC 2 Pro title with five wins from 11 starts, demonstrating his readiness to step up to the next level.

Quotes:
Tommi Mäkinen (Team Principal) : “I’m really pleased with the driver line-up we have been able to put together for next season. I believe it provides us with a great balance in our team as we target more championship trophies next year and in the future. We know how strong Sébastien is and we’re all looking forward to working with him and Julien. I think that being able to attract a driver with his record says a lot about what we have achieved in such a short space of time with this team. Elfyn is a driver I have been watching for some time. We’ve seen that he can have the speed to win on almost any surface, but he can also be very clever when needed and score good points. I’ve known Kalle since he was very young and it’s always been clear that he has something special. He still has lots to learn, but I believe that he is ready for this step now. I want to say thank you to Ott and Martin, Jari-Matti and Miikka, and Kris and Seb for all they have done for our team. I wish them all the best for the future.”

Sébastien Ogier : “I’m definitely very excited to be joining this team. It’s another new challenge for me and I’m looking forward to it. We already discussed it at the end of 2016, and although we didn’t manage to make it happen at that time, I’m now overwhelmed to start working with such an iconic brand as Toyota as well as my childhood idol Tommi Mäkinen. The plan is to aim for some success together and to try to win back the world championship. It’s an interesting line-up: I know Elfyn very well as I’ve worked with him before and I’m sure he can bring a lot to the team too, while Kalle has proven many things already in rallying, so he’s definitely got some talent and I’m sure he will improve very quickly. All three of us are new to the team, so it’s going to be challenging to learn the car and everything, but of course we’ll do our best to perform as quickly as possible.

Elfyn Evans : “Joining Toyota Gazoo Racing is a great opportunity for me and I’m really excited to get going. The team has been very successful since it came into the sport three years ago and I’m looking forward to be a part of it. Tommi has been very successful as a driver himself and knows what it takes to perform at this level. It’s been great to deal with him so far, and I’m looking forward to getting to know the team better as we ramp up towards the start of next season. 2019 was a mixed season for us – missing three rallies due to injury being the low point – but there were some strong results and performances as we competed for stage wins and podiums. Now I want to take that further, to be winning rallies more often and seeing what’s possible in this new chapter. It will be nice to work with Sébastien again too: With the experience and success he’s had, he’s a great guy to have in the team.”

Kalle Rovanperä : “I’m really excited to be joining the team. I think the goal for any young rally driver is to have a seat in a World Rally Car and now that chance is coming for me. It has been great for me to see how Tommi has been trusting me already when I first tested the car a few years ago, and it’s now really nice to be fully a part of his team. I’m sure that next year is going be quite demanding: The biggest challenges will be to learn the new car and also the rallies that are new on the calendar. For sure, the beginning will be all about learning the car and the speed and everything that comes with it. I think Seb and Elfyn will be really good team-mates for me with their experience. I have so much I can learn from them, so it’s nice to have them in the team also.”