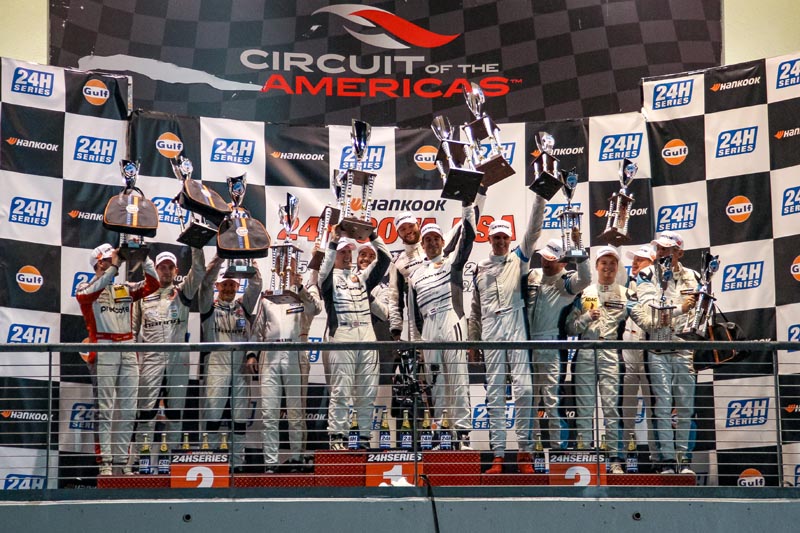 The German team qualified on pole position and headed the field into the overnight intervention, leading every lap thereafter on Sunday and completing 610 laps of the 5.513km Grand Prix facility in the process. That result sets a new distance record for the 24h COTA USA, improving on the 608-lap total set in 2017.

The result also marks the second win in succession for the German team at the 24h COTA USA, and cements proud Texan Ben Keating his first win at his home endurance race.

“The team clearly has a lot of faith in these old eyes to see these corners at night!” Keating joked with radiolemans.com’s Joe Bradley. “The whole team did such a great job. I was a small cog in a big wheel! It’s a team sport and there are a lot of people here that got us up front. We created our own luck, there were no mistakes, and everybody drove flawlessly.”

As it did last year, the Herberth Motorsport Porsche 991 GT3 R (#91, Daniel Allemann / Ralf Bohn / Robert Renauer / Alfred Renauer) crossed the line to secure 2nd overall at the 24h COTA USA. The result means the Bavarian team has finished every CREVENTIC event at the Circuit of the Americas on the overall podium. 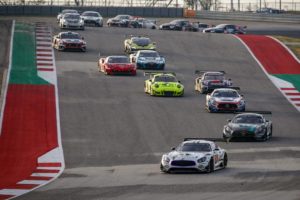 “I’m overwhelmed!” an emotional Pat Briody, Jim’s wife, told radiolemans.com. “I’ve been his mentor, his coach, everything, and I did everything that computers do now, but I did it here, in my head. This has been such an amazing weekend and one we will always remember.”

Sandwiched between them is the MRS GT-Racing Porsche 991-II Cup (#980, Nicola Michelon / Alexander Marmureanu / JM Littman / Constantin Schöll / David Roberts), which suffered a mechanical failure on-track inside the final 10 minutes. The German Porsche was far enough ahead though to still be classified 2nd in-class. 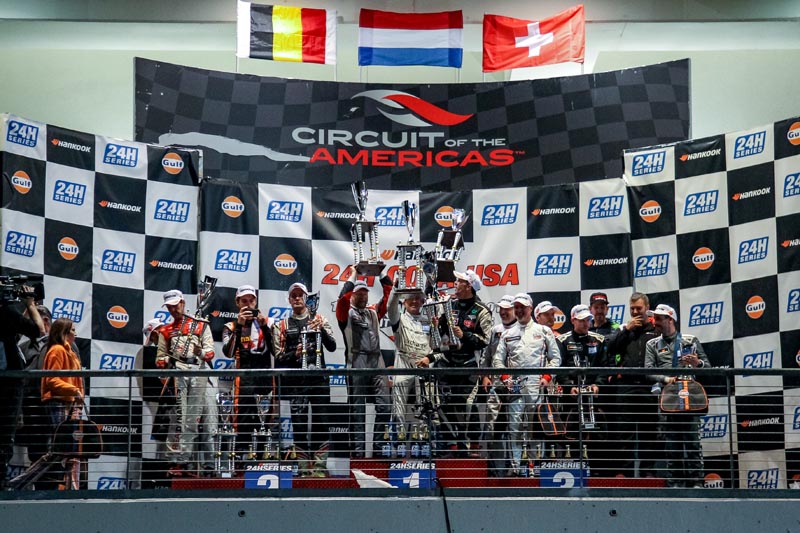 The Red Camel-Jordans.nl Cupra TCR DSG (#101, Ivo Breukers / Steven Liquorish / Jerimy Daniel / Jean-Francois Hevey) rounds out the 2019 24h SERIES season at the Circuit of the Americas with victory in the TCE division. Jerimy Daniel took the chequered flag to complete 546 laps of the 5.513km Formula 1 Grand prix facility and secure the Dutch Cupra its first win at the 24h COTA USA.

Including the standalone TCR SPA 500, this result marks the third victory of the season for the Dutch outfit. So impressive was the team’s run that Red Camel-Jordans.nl even finished inside the overall top 10.

“This is an amazing result for such a small team!” an overjoyed Ivo Breukers told radiolemans.com’s Joe Bradley. “To be honest we had some problems and we were quite lucky with a Code 60 when we had shock absorber failure. But we kept on pushing and never gave up. I still can’t believe it!”

Despite running out of fuel earlier in the race and dropping out of the TCE top five, the AC Motorsport Audi RS3 LMS (#188, Stephane Perrin / Vincent Radermecker / Matthew Taskinen / Will Neal) recovered to finish 2nd. Both teams were joined on the podium by the Autorama Motorsport by Wolf-Power Racing Volkswagen Golf GTi TCR (#112, Jérôme Ogay / Constantin Kletzer / Roberto Ferri / Alberto Vescovi / Yannick Mettler), which now adds the Overall TCE Teams’ title in the 24h SERIES Continents championship to the European honours the Swiss outfit secured in Barcelona.

The 24h COTA USA draws the curtain on this year’s 24h SERIES powered . Endurance racing action with CREVENTIC will return in the New Year with the 15th annual running of the 24h DUBAI at the Dubai Autodrome on 9-10-11 January 2020. Further information can be found at www.24hseries.com.