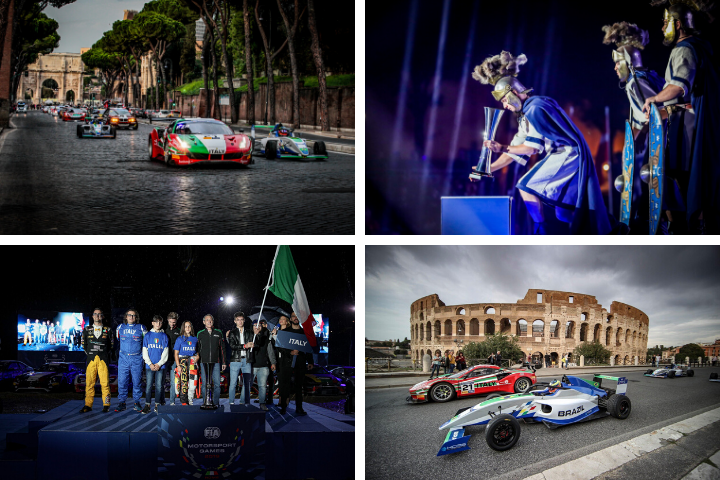 The FIA Motorsport Games launched in spectacular fashion today (Thursday 31 October) with a parade and official opening ceremony in the heart of Rome.

Each of the 192 drivers who will represent 49 National Sporting Authorities (ASN) during the multi-disciplinary event were in attendance at Circo Massimo, an ancient chariot racing venue located just a few minutes from the Colosseum.

The parade through the centre of Rome featured 33 of the cars contesting the inaugural FIA Motorsport Games, with GT, Touring Car, Formula 4 and Drifting machinery all represented. After beginning at Palazzo della Civiltà Italiana and winding its way around some of the city’s most iconic landmarks, the parade concluded with the cars parked around the stage at Circo Massimo in preparation for the opening ceremony.

Proceedings began in earnest when a Roman chariot arrived in the arena carrying FIA Drivers’ Commission President and racing legend Tom Kristensen. The nine-time 24 Hours of Le Mans winner was on hand to welcome attendees to the event and unveil the new FIA Motorsport Games trophy, which will be awarded to the ASN with the greatest medal haul at the end of this weekend’s contest.

Led by their team captains, the competitors then entered the arena in the colours of their national flags and assembled on-stage. They were joined here by representatives from the city and Vallelunga Circuit, where the on-track action will take place over the coming days. Finally, all of this year’s participants gathered for a photograph to commemorate the opening of the FIA Motorsport Games and officially begin the event.

Competition is set to begin with free practice tomorrow (Friday 1 November) before shifting up a gear on Saturday when the first medals will be awarded in the Drifting Cup and Digital Cup. Sunday will see the four remaining contests settled as the GT Cup, Touring Car Cup, Formula 4 Cup and Karting Slalom Cup competitors battle for gold.

For those wishing to attend in person, tickets for the event are available free when downloaded in advance from www.fiamotorsportgames.com/tickets-request. Extensive television coverage will take the FIA Motorsport Games around the world, while fans will have even more opportunities to watch thanks to a variety of online broadcasting options. With the opening ceremony complete, the stage is now set for a spectacular weekend of international competition.

Tom Kristensen, FIA Drivers’ Commission President: “I find the FIA Motorsport Games a brilliant idea. It’s great to bring different disciplines together and bring new people into motor sport, all at one venue. There will be a lot of interaction and crossovers between Digital Motor Sport, Karting Slalom, Drifting, Touring Cars and GTs. To have this all at one venue is important to us because as the FIA Drivers’ Commission we represent drivers in all categories and versatility is a value that’s very important to us. I am sure the FIA Motorsport Games will be a great success.”