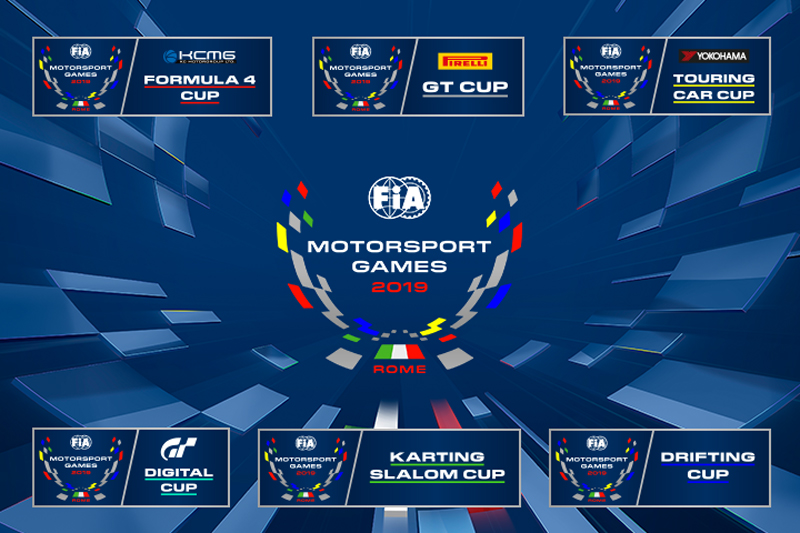 The FIA Motorsport Games will take place for the first time this weekend (1-3 November), beginning a new era of competition as world-leading drivers in six distinct disciplines hit the track in the colours of their national flag.

The multi-disciplinary event’s inaugural running will be hosted by Rome, while the nearby Vallelunga Circuit will stage the competitive action as entrants contend for the coveted gold medal and a place on the top step of the podium. The final results from each discipline will establish a medal table, with the most successful National Sporting Authority awarded the FIA Motorsport Games trophy.

The range of categories competing at Vallelunga will add to the unique spectacle. While there is no shortage of traditional circuit racing in prospect, the addition of more recently established disciplines will ensure that a variety of formats, machinery and competitors tackle the FIA Motorsport Games.

The GT Cup has attracted a 22-car grid, with each team represented by two drivers holding the same passport nationality. A highly skilled set of international racers have answered the call to fly their homeland’s flag at Vallelunga, with entrants travelling from Europe, Asia, North America and Oceania.

What’s more, the GT Cup grid will feature machinery from Aston Martin, Audi, Ferrari, Honda, Lamborghini, Mercedes-AMG and Porsche. A pair of one-hour qualifying contests will set the grid for Sunday’s finale, which will see the medal positions decided in what promises to be a real crowd pleaser.

The Touring Car Cup should produce an equally close-fought contest, with the discipline taking its place at the FIA Motorsport Games in the wake of a global boom in TCR series. A 20-car grid will compete for gold at Vallelunga, with domestic and international stars among those to sign up for international duty.

Each team will be represented by one driver, with the medal positions decided by a pair of sprint races. The combined results of these will establish the order, making consistency a prized asset for the Touring Car Cup contenders. This format should ensure two equally intriguing contests, with race management likely to be crucial to securing the gold medal.

The Formula 4 Cup will utilise a fleet of groundbreaking new cars that have been designed and built specifically for this year’s FIA Motorsport Games, a project undertaken by KC Motorgroup Ltd. (KCMG). The car will be the first hybrid-powered single-seater outside Formula 1 and the first F4 machine to feature a Halo safety device.

A field of 20 young hopefuls will do battle in their national colours, with all cars operated by accomplished single-seater squad Hitech GP. They will use identical set-ups and limited tyres, while data will be shared between all drivers and engineers to ensure that the F4 Cup is a true test of ability. A 20-minute qualifying race will set the grid for a deciding 30-minute battle for the medal positions at Vallelunga.

The Drifting Cup will offer something very different from traditional circuit racing. Utilising part of Vallelunga’s main straight and the complex between turns 10 and 14, the action will be staged under the lights on Friday and Saturday evenings. This should ensure an even more impressive spectacle for what is already an awe-inspiring discipline.

A total of 24 cars have committed to the event, with heavyweight entries from the world of drifting looking to add FIA Motorsport Games gold to their competitive résumé. Many have met before in a variety of global contests and they will do battle once more under the Vallelunga lights.

The Karting Slalom Cup will also offer something new for those accustomed to standard circuit racing, with entrants challenged to undertake a slalom course using a two-driver format. A total of 29 nations will compete for the gold medal, with each represented by mixed female-male driver pairings. Ranging in age from 13 to 16, the contenders will tackle the event with identical electric-powered karts.

Finally, the Digital Cup will ensure that the FIA Motorsport Games features the newest branch of international racing. The competition will be run using Gran Turismo Sport on PlayStation 4, with the same systems developed by Polyphony Digital Inc. for the FIA-certified Gran Turismo Championships. What’s more, a real-life FIA Race Director and Stewards will oversee the contest.

The competitors are truly diverse, combining some of the world’s leading digital talents with relative newcomers to the discipline. Indeed, with 30 confirmed entries, the Digital Cup has attracted the biggest field at this year’s FIA Motorsport Games.

In total, 51 different National Sporting Authorities will be represented across the six disciplines. Host nation Italy will be present in every category, as will France, Kuwait and Russia.

The event’s opening ceremony will be held in the heart of Rome on the evening of Thursday 31 October, after which attention will shift to Vallelunga Circuit. The track will be a hive of activity from Friday onwards, with all six categories undertaking practice sessions during the course of the day.

The excitement level will go up a notch on Saturday, with several crucial qualifying runs set to take place. What’s more, the evening will see the first medals of the FIA Motorsport Games awarded as both the Drifting Cup and Digital Cup conclude at 20.00.

For the remaining four categories, everything comes down to Sunday. The medal positions in the Formula 4 Cup will be established by a final race that gets underway at 11.40, while the Touring Car Cup will stage its deciding contest at 13.20. The Karting Slalom Cup final will run at the same time as these two contests, with the medal positions set to be known by 14.30.

Then, at 15.05, the GT Cup will begin its deciding race and the closing contest of the inaugural FIA Motorsport Games. When the chequered flag falls, the final composition of the medal table will become clear. Later that evening, the best-performing National Sporting Authority will be celebrated during the closing ceremony.

Fans will be able to attend the event free of charge by simply downloading a voucher from the FIA Motorsport Games website. Each voucher can be redeemed for two tickets when presented at the circuit entrance. For those unable to spectate at the track, TV coverage across the globe will take them to the very heart of the action. What’s more, the full event will be streamed live worldwide on a variety of free-to-access digital platforms and on the FIA Motorsport Games website. The website will also feature comprehensive news coverage, which will be supplemented by regular social media updates on the event’s Facebook, Twitter and Instagram pages.

With just a few days remaining before cars are on-track at Vallelunga, final preparations are now underway for what promises to be a thrilling contest. A new era is upon us as the FIA Motorsport Games takes its place on the international stage.