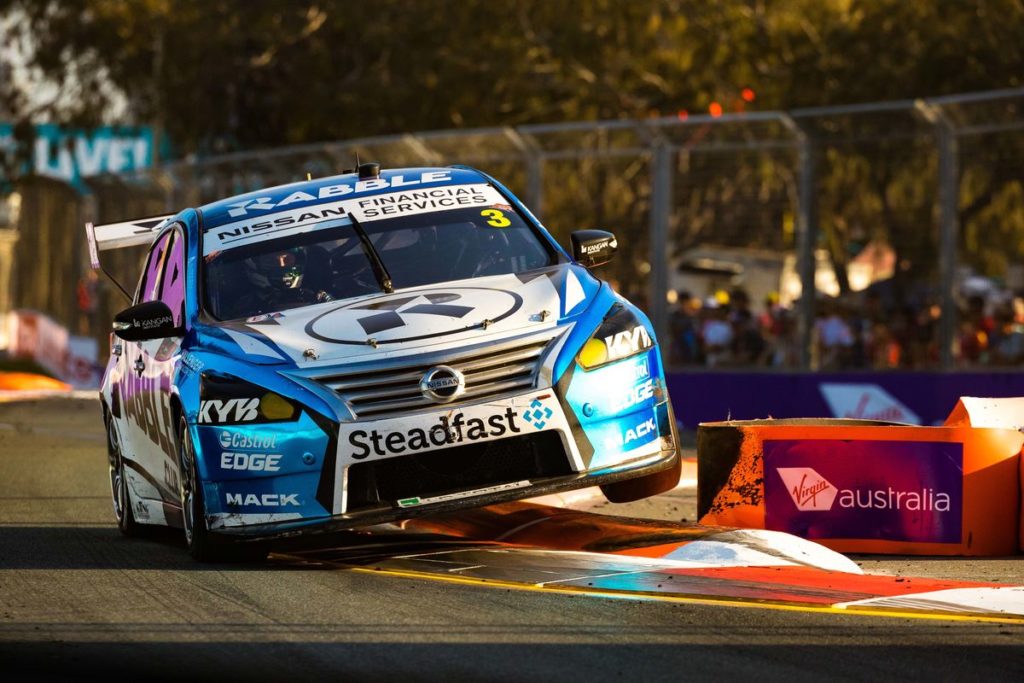 Garry Jacobson has claimed his career-best Supercars Championship finish in today’s action-packed finale to the Vodafone Gold Coast 600. The rookie driver benefited from co-driver Dean Fiore’s experience which saw the duo jump from their starting position of nineteenth to twelfth by the end of the race.

Dean did a massive double stint in the Rabble.club car and was running as high as eighth against many of the main game pilots before he handed over to Garry to steer the car to the chequered flag.

Rick Kelly and Dale Wood got off to a rocky start in the Castrol EDGE car after Dale suffered from a punctured tyre in the opening lap of the race. The extra pit stop to replace the damaged tyre put them on the back foot for the remainder of the race but by keeping their heads down the pair were able to claw their way up to fourteenth.

André Heimgartner and Bryce Fullwood encountered similar dramas during the first lap melee but contact with another car bent the steering on the #7 car and damaged the front splitter. Bryce was able to continue but was at a big pace deficit. André took over to finish the race but couldn’t fight his way forward with the car badly damaged.

Simona De Silvestro and Alex Rullo got off to a good start but copped a penalty early on for crossing the pit lane exit markings after the first pit stop. From there it went from bad to worse as the car suffered significant suspension and steering damage during the course of the race. The 78 spent a fair chunk of time in the garage being repaired but was able to finish the race.

Garry Jacobson, Rabble.club Racing #3 : “We finished today twelfth which is my career-best Supercars finish so I’m pretty pleased with how today went. A lot of the credit goes to Dean Fiore for this weekend, his pace was well and truly ten out of ten, we challenged him both today and yesterday with the length of the stints and he did a phenomenal job. In my stints I was just in clean air, focusing on fuel numbers, we centred our strategy for the race around me saving as much fuel as possible and hanging onto the position that Dean put us in. I’m stoked to get my personal best result, not through pace, but by learning the other important factors that you need to get right when you’re in your rookie season.”

Rick Kelly, Castrol Racing #15 : “It’s always a bit tough when you hop in the car and you’re already a lap down, there’s not a lot you can do. It could have been a lot worse, I mean Dale has done a great job all weekend, it was just a bit of a touch up at turn one that punctured the tyre, you get that in racing. The impressive thing is the team kept their heads down the entire time and tried to get a result from it and we got right back to fourteenth which is as good as we could do with a full green race like that with no safety car. I think we should be happy with that, we’ll just learn from what happened at the start of the race and get onto the next one and try finish the year with good results in the Nissan.”

Andre Heimgartner, Plus Fitness Racing #7 : “Today didn’t go our way unfortunately, Bryce got a fantastic start but in all of the action on the first lap he had some contact which bent the steering and damaged the front splitter. It was just wrong place, wrong time and pretty unlucky. From there we really just limped the car through to the end of the race, we had no pace obviously but we’ll regroup and fix it up for the next one. The positive is the car was quick all weekend so we’re confident heading into Sandown, we had a pretty good result there last year so I’m looking forward to it.”

Simona De Silvestro, Team Harvey Norman #78 : “We had a pretty rough day in Harvey Norman car, we copped a penalty early on for a mistake leaving pit lane and crossing the exit lane markings. It was a weird race, the track opened up on those first few laps and we gained a lot of positions but obviously the penalty put us back. Not quite sure what happened there with the contact between Alex and Frosty, I think Alex gave him enough room but he ran us wide and that damaged the steering in the car and bent a lot of the front end. We brought the car in for repairs and then sent it out again but then we had a front suspension failure so it came in again and probably spent more than five laps in the garage fixing that. Credit to the team for fixing it up and getting us to the end, but it was definitely a rough day.”