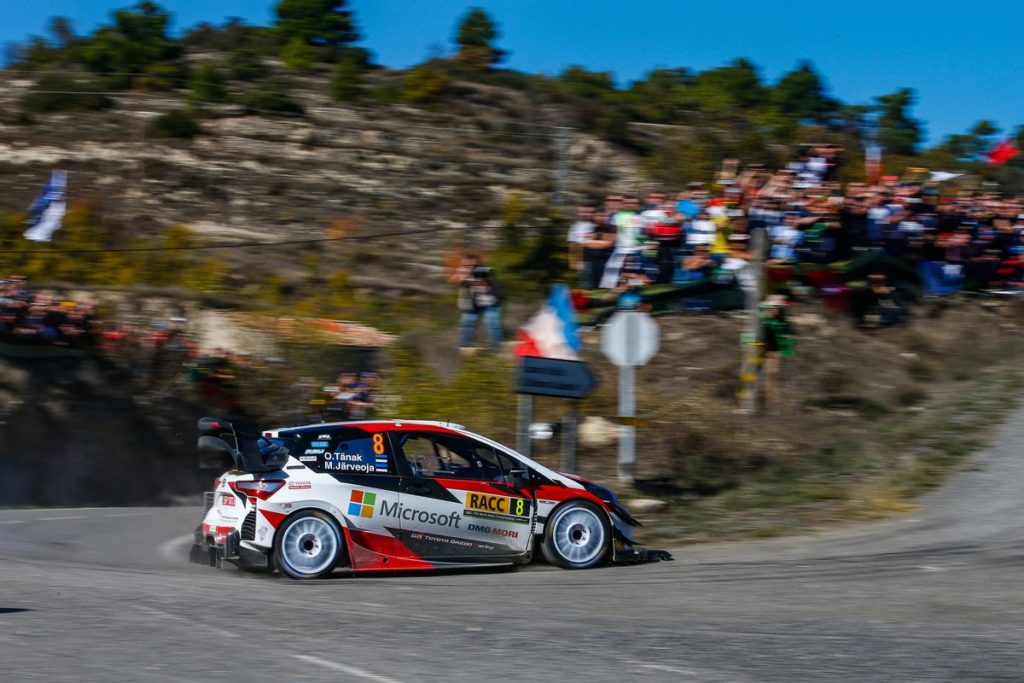 Toyota Gazoo Racing World Rally Team driver Ott Tänak has moved up into a valuable podium position in his bid to clinch his maiden FIA World Rally Championship drivers’ title, scoring a string of stage wins as the crews switched from gravel to asphalt on day two of Rally de España.

After converting the cars into asphalt specification in an extended service last night, the team held fourth, fifth and sixth on the leaderboard at the start of the day, keen to increase the pressure on those in front. Kris Meeke began the morning well, moving up into third place after a strong time on the first stage, but his day ended early when he went wide and hit a barrier in the second stage. He will restart on Sunday after the team repaired the damage to the car.

Tänak began to find his speed later in the morning, going fastest on SS9 before taking a further three straight stage wins during the afternoon. On the closing street stage in Salou, he moved up into third, a position that would give him a very strong chance of clinching the drivers’ title tomorrow, depending on the results of the Power Stage. He is just 3.1 seconds away from the driver in second place.

Jari-Matti Latvala also showed good pace during the day, going second-quickest on both runs over the Querol stage. He ended the day in fifth place having opened up an advantage of over 20 seconds to the driver behind.

Quotes:
Tommi Mäkinen (Team Principal) : “We were confident in our performance on asphalt coming into today and, in the end, we could see we that we were strong. It’s not always easy to push to the limit immediately when you totally change the surface overnight like we do here, but Ott found his confidence and his usual speed this afternoon and now he is in a very good position. I’m confident that he can finish the job tomorrow. It was a shame to lose Kris from the fight as he was looking good, but he needed to push to put pressure on our rivals, and sometimes a small mistake like this can happen. Jari-Matti’s speed has generally been good too and he is on for some important points.”

Ott Tänak (Driver car 8) : “I’m really happy with how today turned out. This morning, I was really struggling and I couldn’t find any rhythm. The car was feeling good but I was a long way from being close to the limit. It was difficult to get used to the pressure of the situation. But I managed to reset for the afternoon and I could improve the rhythm. Tomorrow is another long day with some demanding stages, so there is still a big job to do.” 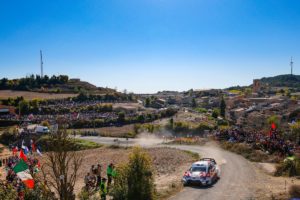 Jari-Matti Latvala (Driver car 10) : “Overall, I must say that today has been good. At first this morning, I struggled with the brakes a bit after the change from gravel, but in the second stage already I had a very good feeling with the car. The afternoon started pretty well too. On El Montmell I ran wide, hit something and damaged the steering arm so we lost a bit of time there. But otherwise, it has been a positive day. Tomorrow I’m going to try to keep the pressure on and see what happens, as we need as many points as we can get.”

Kris Meeke (Driver car 5) : “When you transition from gravel to asphalt on this event, you’re always wondering what the car is going to feel like. The rhythm was really nice this morning and the car felt incredible. Not far into the second stage, I went to brake for a fast left that tightened. I knew the corner very well, but immediately I locked the rear wheels and I didn’t make the corner. I touched the barrier at the rear of the car and that was it. I’m really frustrated. I had to put it on the line today to try and get among our rivals for the manufacturers’ championship. I think we could have had the speed to do it but unfortunately that small mistake cost us.”

What’s next?
The final day consists of a pair of asphalt stages close to Salou, which will both be run twice either side of service. The latter test, La Mussara, will host the rally-ending Power Stage, where the maximum of five bonus points on offer could prove crucial in the drivers’ championship.

Key stage: La Mussara (SS15 & SS17, 20.72 kilometres)
Miikka Anttila (Co-driver car 10): “This is probaly the one stage this weekend that none of the crews have much experience on. The first six kilometres were driven in 2016; the rest not for a long time in this direction. In the beginning, the road turns a lot, and once on top of the hill it’s very fast and flat-out in places. Then it’s back to a slower road down to the finish.”

0 0 0 0 0
Previous : WRC – M-Sport Ford tackle the tarmac
Next : WRC – Thierry Neuville holds a 21.5-second advantage at the top of the classification