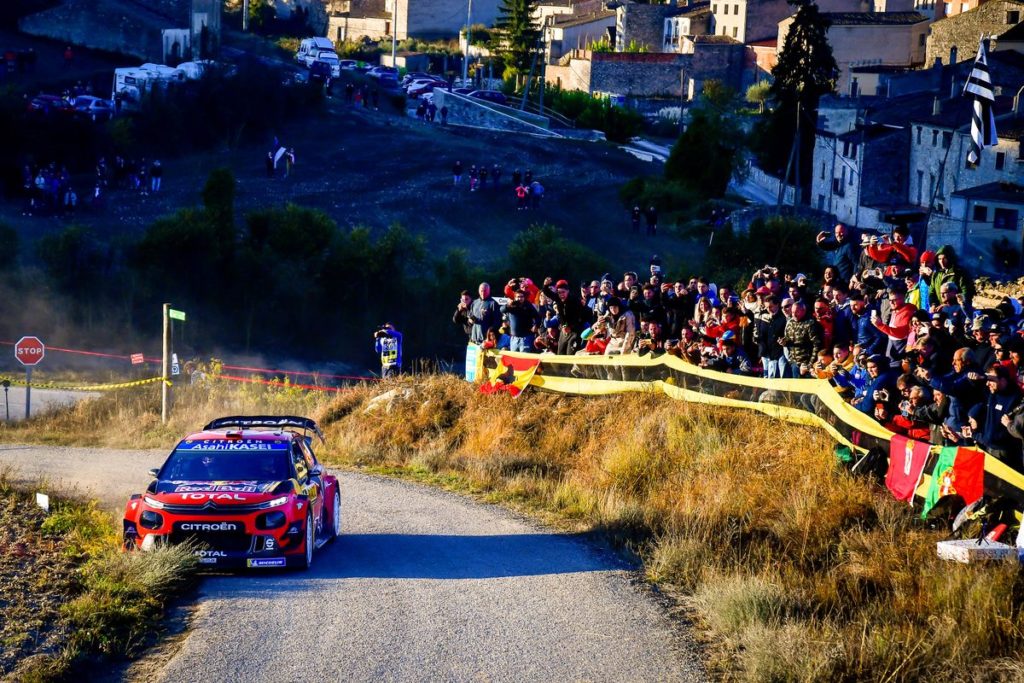 After their misfortune on day one, Sébastien Ogier and Julien Ingrassia bounced back today like true champions, finding the resources necessary to move back into the points (8th place) whilst showing the improved competitiveness of the C3 WRC on tarmac.

With the configuration of the cars switched in service yesterday evening, today the crews tackled 121.72 kilometres of timed stages held on the wide and sweeping circuit-style tarmac roads of Catalonia.

After yesterday’s disappointment, Sébastien Ogier and Julien Ingrassia once again showed great professionalism, giving their all to try and make up as much ground as possible, whilst also trying out some set-up options for future tarmac events. The third fastest time secured on the day’s opening stage (14.08km), just 2.5s off the leading mark, immediately confirmed the step forward made in the performance of the C3 WRC on tarmac. The French crew’s efforts were then rewarded by being promotion to 8thplace, therefore into the points, on the next stage. Although they were then left without any realistic target to go for, Sébastien and Julien nonetheless continued to post some very competitive times, despite the close battle raging at the front. They claimed two second fastest times in particular, just 1.2s and 1.7s off the stage-winning times, on SS9 and SS12 (24.40km). In conjunction with the team, the six-time world champions also made use of the mid-leg service to make some changes to the set-up, as they continued to improve the C3 WRC for future outings on this surface.

Determined to keep fighting, the Citroën Total World Rally Team will try to maintain its momentum on the 74.14 competitive kilometres and four stages scheduled tomorrow, whilst aiming to grab as many points as possible in the Power Stage.

Pierre Budar, Citroën Racing Team Principal : “One positive from today’s second leg is that it confirmed that the work recently done on tarmac has been valuable and effective, and showed that we have improved the performance of the C3 WRC on this surface. It also gave our technical team the chance to explore a few ideas on set-up options, looking ahead to the next time we compete on tarmac.”

Sébastien Ogier, Citroën Total WRT driver : “Although it wasn’t easy to find motivation today, I did my best to remain very focused and push hard.  We ended up setting some decent times. I’m pleased that my good feeling in testing has been confirmed here in the rally. The balance of the C3 WRC is better and I have more confidence in the front axle. We’re not quite there, however, there’s still a little something missing. We’re going to keep working hard to find the last few tenths, which are always difficult to get.”