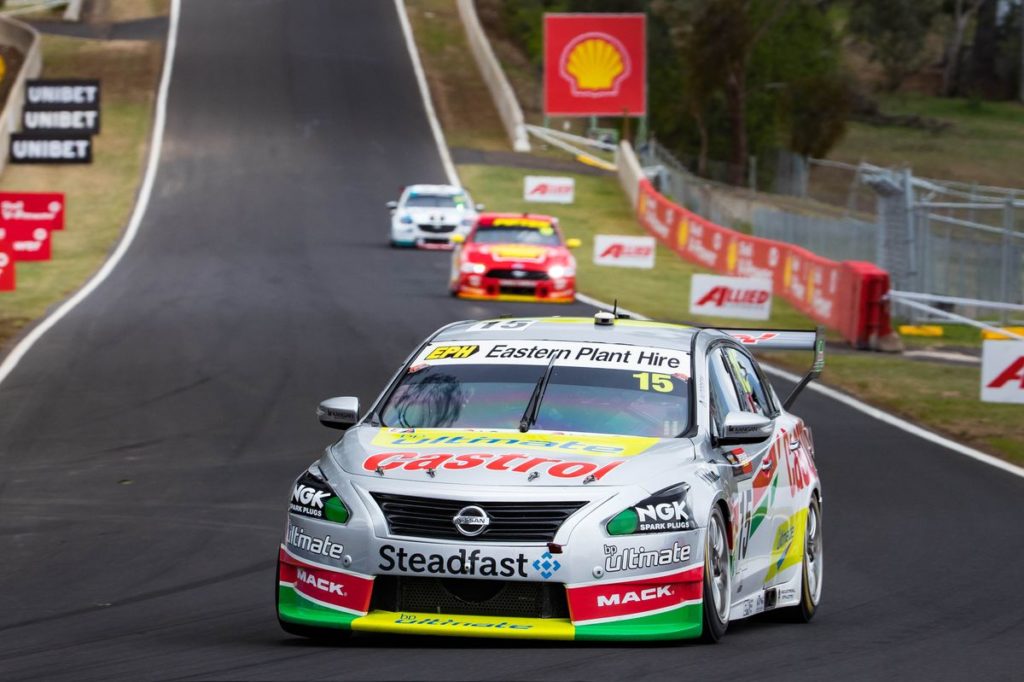 Rick Kelly has finished today’s SuperCheap Auto Bathurst 1000 on fumes after a challenging final stint to get the Castrol car home in ninth spot. It was an action-packed race and the Rick was under strict fuel conserve directions from his engineer just to finish – he did a phenomenal job to keep the cars behind at bay in the closing laps while clutching and coasting on the straights to ensure he made the chequered flag.

Despite multiple safety car restarts and a loose wheel nut during one of co-driver Dale’s stints, the pair had a clean 1000km race around Mount Panorama.

André Heimgartner experienced a crushing end to his Bathurst 1000 campaign in the closing laps of the race after running in the top five for the majority of the race. He too was on maximum fuel conserve towards the end before the team brought him in for a quick splash of fuel. Keep to make up positions lost in the pit stop, André was on a mission but unfortunately came unstuck at Forest Elbow.

Simona De Silvestro and Alex Rullo ran a drama-free race in the Team Harvey Norman car but struggled to maximise the car’s potential completing the majority of the race stuck in traffic. The safety car restarts compounded this problem and the duo weren’t able to move past fourteenth

Garry Jacobson was having a great day in the Rabble.club car with co-driver Dean Fiore after the pair managed to work their way from P21 on the grid into the top ten. However contact with another driver punctured Garry’s tyre which put him into the sand at turn one. He was able to continue the race but not in a favourable position.

Rick Kelly –  #15 Castrol Racing : “Today’s race was kind of boring for me for the first 400km but after that it really heated up. We had a great race car and we were able to use it to get up into the top ten, despite a couple of dramas like having a rear wheel nut come loose during one of Dale’s stints. And some of the safety cars helped us then we had a double stack pitstop with one of the incidents which really hurt us and I think we were back down to fifteenth. We were then able to get up to fifth towards the end there but we were in serious fuel conservation mode with the numbers I was being asked to do. That was seriously hard to execute to get us to the end of the race but I enjoyed the challenge and with that final safety car meant that we had enough fuel for that last lap to really push and the car was fantastic so a little bit frustrating that we had such a good car but couldn’t use it in the end there because we needed to save fuel. But that was probably the best car we’ve had here for a long long time, the crew did a fantastic job so I’m looking forward to getting to Gold Coast and seeing what we can do.”

Simona De Silvestro – #78 Team Harvey Norman : “Unfortunately I think we screwed ourselves a little bit with the first stop to be honest, I think we should have tried to aim for track position which we didn’t do and that really put us on the back foot to be honest, after every stop we came out in traffic. After the first stop we were losing almost two seconds a lap to what we were doing in clean air at the start. From then on we were kind of behind the eight ball, the safety cars made things worse because of the position we were in. It was frustrating because we had good pace, and we showed there in the end we were easily able to keep up with the cars around us. Alex did an awesome job and I think we worked really well together but for sure walking away without a decent result is a bit annoying.”

Garry Jacobson – #3 Rabble.club Racing : “Our car was clearly quicker than Ritchie’s and we were behind him for about six laps and he made his own mistake going through the last corner then I got up next to him and then once I was next to him he started driving into my car down the straight. After the third or fourth time hitting me down the straight he cut my tyre and went into the next corner without any grip and we ended up taking each other out into the sand trap. Aside from that I think the process of us getting into the top ten before the contact was an extraordinary effort by the team, the car has handled its best with the latest aero change and a couple of other things we’ve worked on with setup. We were a top ten contender today through genuine pace, the pit stop strategy was good, if you had of told me at the start of the year we would be top ten at Bathurst I would have been pretty surprised so big thanks to my crew, the car was faultless.”

André Heimgartner – #7 Plus Fitness Racing : “Obviously a pretty disappointing way to finish the race with only ten or so laps to go, I was pushing hard at the end there to try and make up a place and get in front of Frosty after the late pit stop we did but these things happen, it is what it is. We’ll take a lot of positives away from this weekend, it’s the best the car has ever felt, I feel like myself, Bryce and the whole crew managed the race really well, pit stops were perfect, we drove a good race. We had the pace to be in the top five or six for the majority of the race and we had a good strategy as well. Unfortunately it wasn’t our day but if we can maintain this pace for the Gold Coast I think we’ll be in for a good result.”