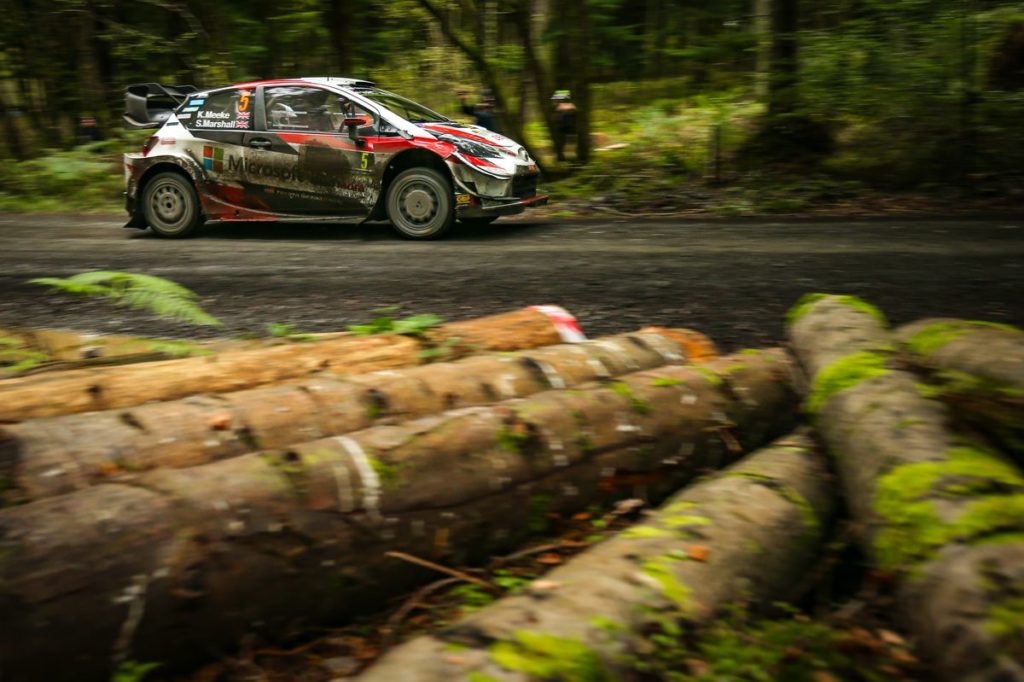 The British round of the FIA World Rally Championship is underway following a new-look beginning to the event, with a start ceremony in the city of Liverpool and the opening stage at the Oulton Park racing circuit. Toyota Gazoo Racing World Rally Team driver Kris Meeke claimed an early lead on his home event by winning a wet and slippery first stage, having earlier also topped the pre-event shakedown.

The Toyota Yaris WRC crews completed three runs each this morning over the shakedown stage in Gwydir forest. The 4.68-kilometre shakedown route was more representative of the muddy gravel stages to follow over the rest of the rally, giving teams a chance to fine-tune their cars for the conditions. While Meeke recorded the fastest time, Jari-Matti Latvala was seventh and Ott Tänak eighth.

The Oulton Park stage featured a mix of asphalt and gravel with tricky conditions following rain. Meeke was 2.1 seconds faster than anybody else to take an early lead. Latvala finished eighth while Tänak was 13th following a brief stall in the stage.

Quotes:
Tommi Mäkinen (Team Principal)
“It’s nice to see Kris make a good start to his home rally today. The others unfortunately had some small issues in the first stage, but the time gaps are still quite small and there is, of course, a long, long way to go. It looks like the conditions are going to be really difficult this weekend, as they often are on this event. I think our drivers are all fairly comfortable in these conditions and our car seems to be performing well, so we are feeling quite confident.”

Ott Tänak (Driver car 8)
“I stalled the engine in the first stage and lost several seconds. My lights were pointing to the trees and I missed the corner. The conditions in shakedown were tricky as always on Rally GB. It’s when you go into the shakedown here for the first time that you see just how tricky the conditions are going to be. It was challenging and we tried to improve a few things, but hopefully we will have a good feeling tomorrow. The most important things here are to have confidence in the car and to be able to read the road and the grip levels, as they are always inconsistent.”

Jari-Matti Latvala (Driver car 10)
“I had a bad run on the first stage: I didn’t switched the heated screen on, so I lost visibility and went wide. In shakedown I was surprised how slippery it was already on the first run. It was also colder this morning than during the recce, which makes the roads here pretty greasy. But in the end, I managed to get quite a good feeling. We made some little adjustments with the car and also played a bit with the tyres, and I think our plan for the rally is now quite clear. We had a great rally here last year and it be really good if we can get another solid result.”

Kris Meeke (Driver car 5)
“The first stage tonight was really tricky. It was typical Rally GB – dark and slippery – but on a racetrack. It was nice to get a feeling for the tricky and muddy conditions in shakedown this morning. My pre-event test was 10 days ago and it was still about 22 degrees here in Wales. We knew it was going to be different for the rally and it was certainly a very slippery stage. The times didn’t mean anything, but I’m feeling confident in the Yaris WRC in these conditions. There’s no points awarded for today but hopefully we can carry this good rhythm into tomorrow morning for the start of the rally proper.”

What’s next?
The first full day of the rally consists of nine stages in total around the mountains of Snowdonia. The four forest tests that make up the morning loop are run again following mid-day service in Llandudno. The second loop is split in half by the short Slate Mountain test, and will end in darkness for the repeat pass of Aberhirnant.

Key stage: Aberhirnant (SS5 & SS10, 10.26 kilometres)
Seb Marshall (Co-driver car 5): “This is one of the shortest stages of the rally but one of the most demanding. It’s incredibly quick and it rewards the brave. The second run will be in the dark, and when we last did that two years ago we had fog, so it can be a real challenge.”