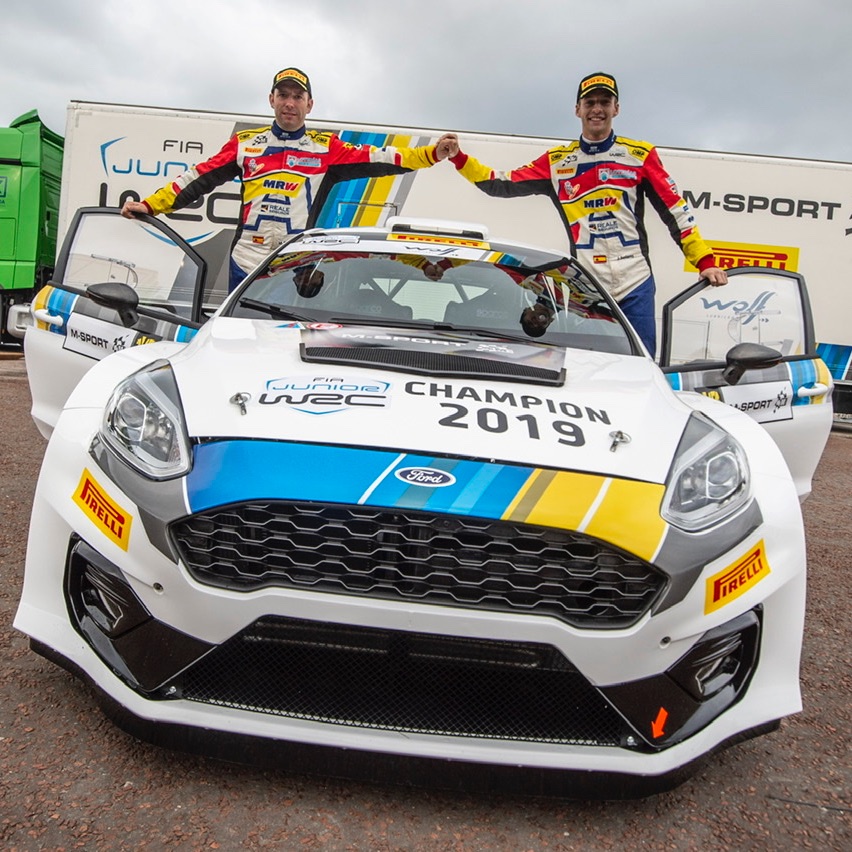 Jan Solans has made FIA Junior WRC history, winning the 2019 championship and Wales Rally GB, he becomes one half of the only pair of sibling champions in Junior WRC. His brother Nil Solans won the championship in 2017.

The Spaniard wins a career-transforming prize package. He receives free registration for the 2020 WRC2 category in his own, brand new, EcoBoost-powered M-Sport Fiesta R5 MkII with 200 Pirelli tyres and five free WRC2 entries for the 2020 FIA World Rally Championship.

Solans delivered a level-headed but supreme performance on Wales Rally GB, becoming a force to be reckoned with for Rally victory from the get go. Tom Kristensson was locked in duel for the championship with Solans throughout Friday before suffering a puncture at the end of the morning loop on Saturday, losing over three minutes to Solans. From that moment onwards, Solans changed his strategy with the sole focus of bringing his EcoBoost-powered M-Sport Fiesta R2 home to clinch victory on Wales Rally GB and claim the biggest prize in rallying, the FIA Junior WRC Drivers Championship.

Solans has had an incredible season throughout 2019, taking an impressive podium at the season opener on Rally Sweden. Tour de Corse was a rally where he had his sights set on victory but suffered a puncture early on in the rally and immediately turned his attention to racking up stage win points on his way to fourth position. Sardinia was where Solans emerged as a true contender for the championship, dicing for stage wins and the lead with Dennis Radstrom. It was a battle he came out on top of, winning the rally and claiming the championship lead. The fourth round of the championship was held on Rally Finland where the Spaniard claimed a respectable second position and added more stage win points to his tally. Heading into Wales Rally GB, Solans had 24 stage win points to his name and was just one-point shy of the championship lead.

His pace and determination to push for stage wins has caught the attention of many throughout the WRC service park, and it certainly bodes well for his 2020 WRC2 campaign.

Jan Solans, 2019 FIA Junior WRC Champion, said: “It feels amazing after winning my first WRC category title and have some many people to thank for their support through this season. Hopefully next year will be a great season in WRC2 which I’m really looking forward to.”

FIA Junior WRC Championship Manager, Maciej Woda, said: “Huge congratulations to Jan and Mauro – amazing result from this duo in their first season in the WRC. It is a very well deserved win in a very competitive Championship. I am hugely impressed with his speed and I can see Jan being serious contender in 2020 WRC2. I would like to thank and congratulate all Junior WRC drivers this year for very friendly and very fair competition, which is what makes Junior WRC so special. Thank you Jan and congratulations!”