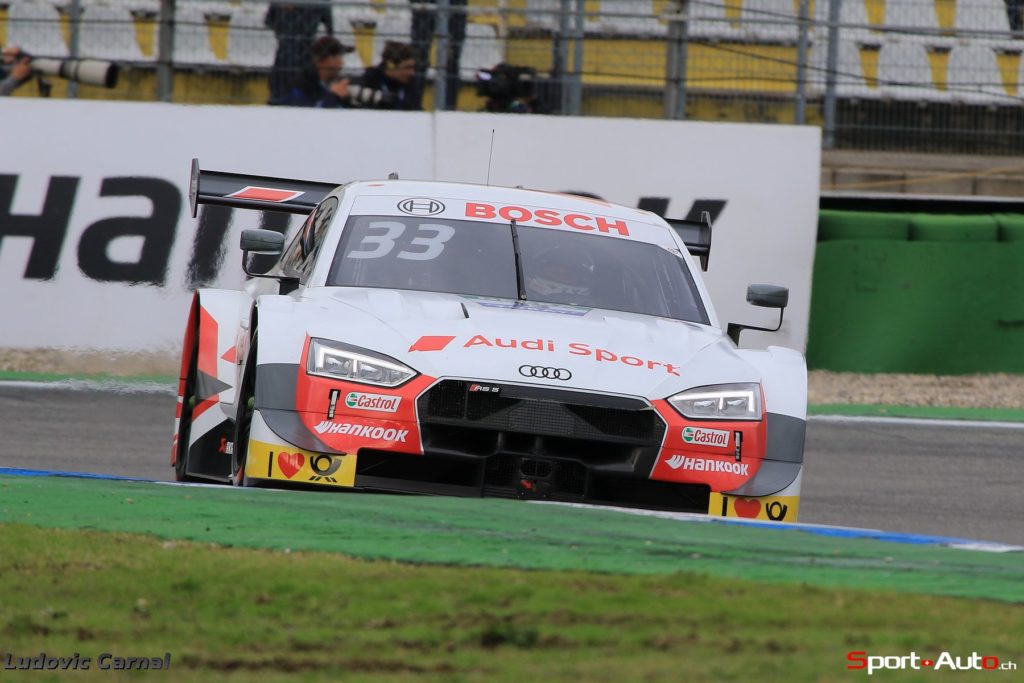 René Rast began the final weekend of the DTM with a masterful performance: The Champion won Saturday’s race at the Hockenheimring from pole position. Having scored the maximum number of points, he secured the teams’ championship for Audi Sport Team Rosberg ahead of the last race. His seventh victory this season also marked the 50th success of the Audi RS 5 DTM.

Under the eye of Audi’s Management Board Member for Development Hans-Joachim Rothenpieler, Rast achieved another perfect day on Saturday. On a rain-wet track in the morning, he secured pole position for the eighth time this year. In the race, Rast immediately took the lead on a dry track. Following his pit stop, he only had to briefly let BMW driver Marco Wittmann pass him before successfully countering and bringing home victory in commanding style. After crossing the finish line, Rast exuberantly celebrated the 17th win in total in his career with donuts and also flung his racing shoes toward the audience after the race.

“That was an outstanding race,” said Rast. “In qualifying, our timing was perfect. Even though I had two cars in front of me on the last lap I was able to clinch pole position. In the race, Marco came very close to me at times. We had a nice battle for some laps but in the end I was clearly faster and won the race – a fantastic feeling!”

Among the first to congratulate him after the race were team founder Keke Rosberg and his son, Nico. The two Formula One World Champions were delighted about the early win of the DTM teams’ championship, marking the second teams’ title for Audi Sport Team Rosberg after 2017.

Mike Rockenfeller from Audi Sport Team Phoenix in third position completed another double-podium for Audi. “It was a nice race but I was struggling a little with my tires and wasn’t able to quite keep pace with René and Marco,” said “Rocky.”

With Robin Frijns from Audi Sport Team Abt Sportsline in fourth position and Rockenfeller’s teammate Loïc Duval in fifth, a total of four Audi drivers finished Saturday’s race in the top five.

“This is another very strong result for Audi,” said Head of Audi Motorsport Dieter Gass. “Our drivers showed a strong performance on the whole. René of course was outstanding once again. He obviously controlled the race and only had to overtake Marco Wittmann once in order to bring home victory. The 50th success for the Audi RS 5 DTM is a tremendous milestone. It was a fantastic race, especially in the second half. There were many fair fights on track, and it was nice to see Jenson Button in the Honda so far at the front of the field.”

Jamie Green (position twelve) and Nico Müller (position 17) finished out of the points on Saturday. The Swiss from eleventh on the grid was on course for a podium but lost all chances due to a safety car deployment that was unfortunate for him. At that time, Müller was the only driver not to have made his mandatory pit stop yet and, as a result, had to pit twice for changing tires.

Before the last race on Sunday (starting at 1 PM CEST live on German TV channel SAT.1), Müller has a 21-point advantage in the drivers’ championship over third-placed Marco Wittmann in a BMW.

0 0 0 0 0
Previous : Podium for BMW and Marco Wittmann to start DTM finale weekend – four BMW drivers in the points at Hockenheim
Next : DTM – Seventh heaven: Rast racks up another win at Hockenheim