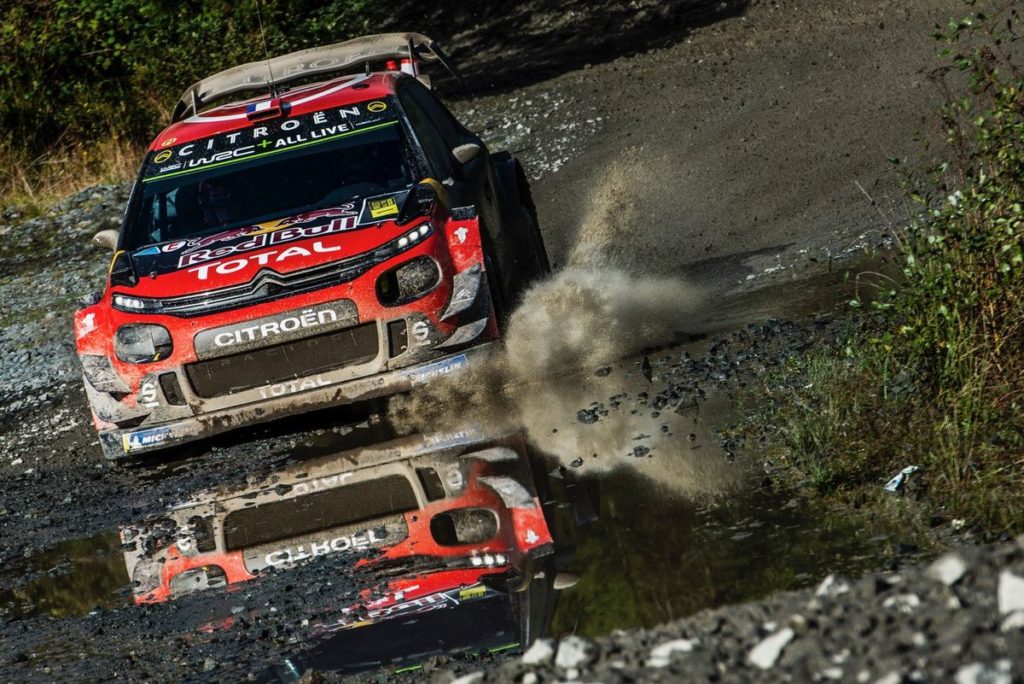 Consistently among the frontrunners throughout today’s opening leg, Sébastien Ogier and Julien Ingrassia ended day one in second position, just 3.4s behind the leaders. Considerably less experienced at this tough, unusual round than their team-mates, Esapekka Lappi and Janne Ferm were unfortunately caught out by one of the many tricky sections, despite having adopted a steady approach. They will nonetheless rejoin the action tomorrow under Rally 2 rules to get as many miles in the car as possible.

With heavy rainfall over the last few days in Wales, particularly after Hurricane Lorenzo swept past the west of the UK and Ireland, today’s first proper leg (following last night’s opening super-special stage) looked set to be a serious challenge. A test for the crews, who had to deal with the very slippery and changeable conditions, but also for Citroën Total World Rally Team’s mechanics, who were forced to adapt the C3 WRC’s set-up after pre-event test had been held in perfectly dry conditions…

It had to be said that the Red Army came through these testing circumstances remarkably well once again. Moving into third overall after the day’s opening stage, Sébastien Ogier and Julien Ingrassia immediately confirmed the competitiveness of the C3 WRC. They briefly held second position, before making it the mid-leg service in fifth, but just 2.8s behind second place. In the afternoon, they upped their pace again, securing two consecutive stage wins on the very narrow and technical Elsi and Penmachno stages (SS6 and SS7). They then took a slightly more cautious approach on the night stages to end the day ideally placed in 2ndposition, just 3.4s behind the leaders, ahead of what is widely expected to be the decisive leg.

Having made a careful start to the day on this extremely tricky surface, Esapekka Lappi and Janne Ferm were gradually getting to grips with the C3 WRC in the mud, reflected in the 4th and 3rd fastest times set on SS3 and SS5 respectively. However, unfortunately, they made a mistake at the start of the afternoon loop, caught out by the very limited grip under braking, and had no choice but to retire for the day. They will be back in action tomorrow under Rally 2 rules, aiming to get more miles under their belts in these very specific conditions and to work hard for the team.

Tomorrow’s leg looks like it may be even tougher than today: crews have to cover a competitive distance of some 151.24 kilometres but with only a mid-leg tyre-fitting zone and therefore no service period. However, with the leg featuring wider and faster stages, it may well suit the Citroën Total World Rally Team crews…

“Obviously, we’re pleased to see that Sébastien and Julien are able to fight for the win. They used all their experience to manage the day really well. They were very quick this afternoon and then perhaps a little bit more cautious this evening, but they are very much in contention. Tomorrow promises to be another very difficult day. We might get some fog, for example, so all bets are off. Clearly, we’re disappointed about Esapekka and Janne’s misfortune, but this can happen when you are driving on the limit on this kind of surface. You need a good deal of experience in order to read the changes in grip on the Welsh roads and neither of them has a great deal of that here as yet.”

“Obviously, we have had a good day today, even though we lost a bit of ground on the last two stages. It was difficult to read the grip and I probably hesitated a bit too much whereas in the end, the level of grip wasn’t that bad. When you look at how small the gaps are at the front, everything is still up for grabs, so we’ll keep pushing flat out tomorrow. The roads on Saturday’s stages are expected to be quicker and wider, and they are very beautiful too, but they will undoubtedly still be very tricky in places, depending on the conditions.” 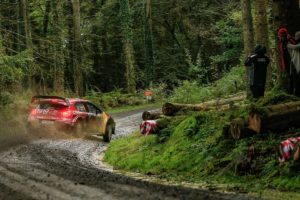 “The morning went well for us, since we had gradually upped our pace and our rhythm was pretty good. At the second corner on the afternoon’s opening stage, I overestimated the level of grip, ran wide and as it was pretty narrow at that point, I hit the bank and broke the suspension wishbone. And that was that. For tomorrow, we need to talk about it properly with the team but I’m going to do whatever I can to help, possibly testing stuff that may be useful for Seb, whilst trying to keep driving quickly on stages that are faster and more flowing than the ones we tackled today.”

0 0 0 0 0
Previous : WRC – Back home, and back on pace
Next : WRC – Thierry Neuville holds fourth place after the opening ten stages