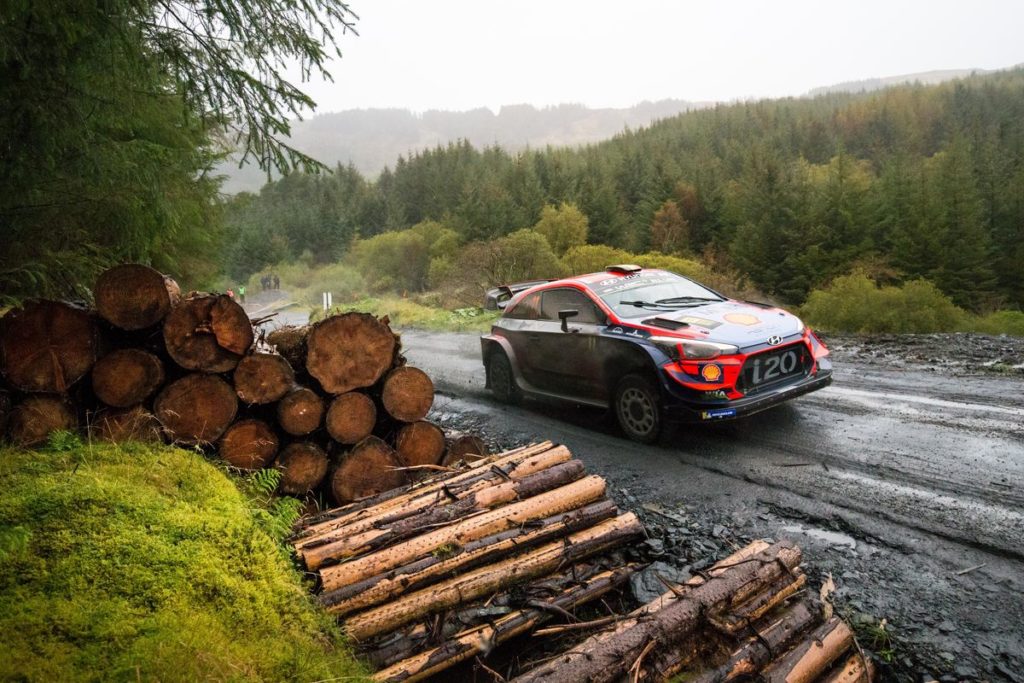 Hyundai Motorsport holds fourth place at the end of Friday’s stages at Wales Rally GB, round 12 of the 14-event FIA World Rally Championship (WRC), and is involved in a tantalisingly close battle for the leading positions.

A gap of just over eight seconds splits the current rally leader from fourth-placed Thierry Neuville, who heads a trio of Hyundai i20 Coupe WRC cars with Andreas Mikkelsen in fifth and Craig Breen in sixth.

Friday’s itinerary covered nine stages with typically wet and slippery conditions greeting the crews from the outset. Opening with the 11.65km Elsi and 16.19km Penmachno stages, the schedule moved onto Dyfnant (19.36km) and Aberhirnant (10.26km).

The four stages were repeated in the afternoon with the short 1.60km Slate Mountain in the middle. The repeat of Aberhirnant concluded the day’s action, taking place in darker conditions. On an interrupted day, SS5 (Aberhirnant 1) was cut short on spectator safety grounds, while SS7 (Penmachno 2) was curtailed following a crash of a competitor. Breen was unable to take part in either stage, and was instead allocated a nominal time.

Friday began under rainy skies resulting in stage conditions typical for Wales Rally GB. Despite the sun emerging over Llandudno during lunchtime regroup and service, the afternoon stages remained challenging. Hyundai Motorsport claimed a 1-2 in the Slate Mountain test before the light fitting zone that preceded the evening stages.

Neuville said: “It’s been an OK start to the rally, although I don’t feel we were always on the pace we wanted. We struggled with the balance of the car during the morning stages, and couldn’t really find the confidence we needed. We made it to lunchtime service in second place overall and it was clear the fight for the lead of this rally would be incredibly close. We tried to improve the feeling in the car during the afternoon but it wasn’t straightforward with some tricky conditions. We have to make the most of the situation and see what tomorrow brings.”

Improvements during the day for the Norwegians as they fought up to fifth
Second in SS8 (Slate Mountain), part of Hyundai Motorsport 1-2 in stage 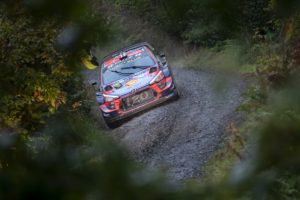 Mikkelsen said: “We ended the day in a reasonable position, in fifth, but we struggled in the final night stage because I adjusted my lights and could’t see everything in the distance. Overall, we have experienced some very typical and demanding conditions in the Welsh forests today. We lost a bit of time in the morning but made some changes to the car that helped us find better performance. It’s been a while since I’ve driven on muddy conditions like we have faced today. It took time to adjust and learn to trust the grip, which was better than I thought. It’s so easy to make a mistake. There is still room for improvement.”

First WRC event since Rally Finland
Strong morning loop for the Irish crew, but struggled in the afternoon 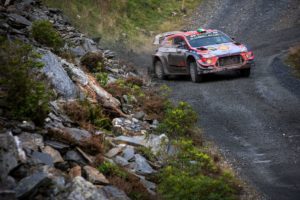 Breen said: “A day of two halves for us, really, including a few things that we were out of our hands. We had a decent morning and it felt great to get back in the Hyundai i20 Coupe WRC. We made it to lunchtime service relatively unscathed. There was a pretty big moment in SS4 where we became at one with the trees, but we had a lucky escape. SS5 was stopped due to spectator issues so we received a nominal time that dropped us down to sixth. We suffered from our road position in the afternoon, and lost time on SS6 as the stage became rutted. We were then given our second nominal time in SS7 before getting back on the pace at Slate Mountain. The day ended with really tough twilight conditions, including foggy parts, in SS9, and a night run through Aberhirnant without the benefit of the earlier daytime stage.”

Team Director Andrea Adamo: “It has been another tough day, but a good one for Thierry and Nicolas who are fighting for the victory here in Wales. There are four cars within just eight seconds at the front, so everything is still open. Honestly, we would have hoped for better positions for Craig, who is far behind, having been blocked twice by cancelled stages and running in the night – in darker conditions compared to the other crews. For Andreas, it has been an average day and we would have hoped for him to be closer in the leading battle.”

Seven stages make up Saturday’s itinerary over a total distance of 151.24km
The day includes two runs through Welsh favourites Dyfi (25.86km), Myherin (22.91km) and Sweel Lamb Hafren (25.65km), as well as final stage at Colwyn Bay (2.40km)
No lunchtime service means crews have a demanding – and long – day of WRC action on the Welsh gravel with the weather likely to play its own role.

0 0 0 0 0
Previous : WRC – Citroën lie second after day one with Ogier-Ingrassia
Next : WRC – Toyota Yaris WRC leads the way in Wales