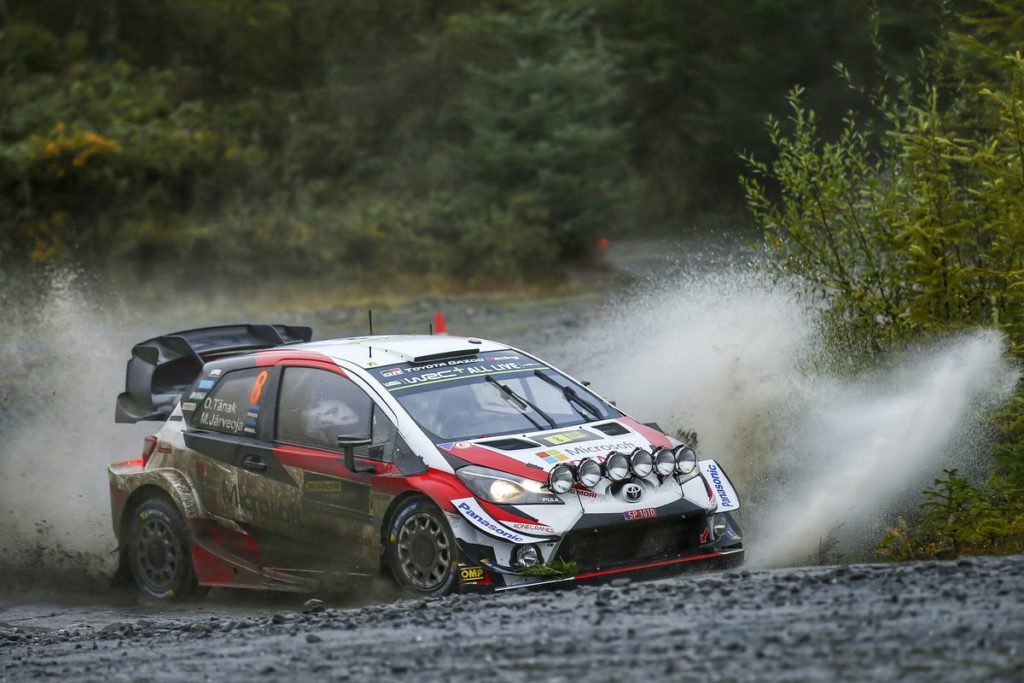 The Toyota Yaris WRC led throughout the first full day of Rally GB, with championship leader Ott Tänak moving to the top of the leaderboard this evening following four stage wins. Kris Meeke is third, only 3.6 seconds behind Tänak, after leading for much of the day on his home event.

Fastest on Thursday night’s opening stage at Oulton Park, Meeke took the rally lead into today’s nine stages across north Wales. Heavy rain through the night and morning made the stages particularly muddy and slippery.

The Toyota drivers enjoyed a strong morning in the tricky conditions. While Meeke opened up a six-second advantage out front, Jari-Matti Latvala was joint fastest on SS5 to climb up into third just ahead of Tänak, who won two of the first four stages. Latvala was unfortunately forced to retire from the rally after he crashed on SS7: his car’s rollcage was too badly damaged for a restart to be possible tomorrow.

The second loop of the day ended in darkness, with Tänak excelling to win the final two stages and take over the rally lead from his team-mate. Tänak’s advantage over second place is 3.4s, with Meeke just two tenths of a second further back.

Quotes:
Tommi Mäkinen (Team Principal)
“It has been a very good day for Ott and Kris: they did a great job in tricky conditions and to be first and third tonight is good for the team. Unfortunately, Jari-Matti made just a small mistake. The end result wasn’t very small, but that is how rallying can be sometimes. I think Ott and Kris are feeling confident about tomorrow: the roads are bigger and more flowing and they should be very good for our car as well.”

Ott Tänak (Driver car 8)
“It has been a really demanding day. This morning, the grip was generally higher than I was expecting, but it was changing a lot and difficult to predict. This afternoon, the stages were a bit rougher and I struggled with the visibility with the mud on the screen. But in the last two stages in the dark I had a good feeling with the car and we could set some good times. I think that tomorrow’s stages should suit us but I’m sure that it will be another intense fight.” 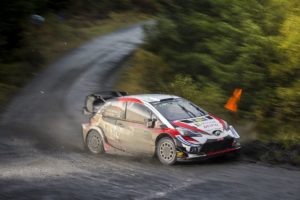 “At first this morning, I wasn’t in the right rhythm with my driving but then in Dyfnant and Aberhirnant it was definitely going much better, even though the grip was changing a lot. In SS7, I came over a crest and the car went light, I lost the rear immediately, we hit the bank and rolled. I just had a little bit too much speed and jumped a bit too far. It’s very disappointing to be out of the rally: not only for myself but also for the team, as it was my job to try to bring some good points for the championship.” 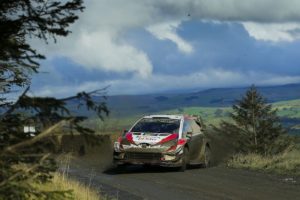 “It’s been a good day. We led for most of it and then Ott just got past us in the dark. It was very wet this morning, and then the rain stopped and the grip levels were a bit more consistent in the afternoon. I seemed to lose a little bit of time this afternoon but there’s only three seconds between three of us, so I’m happy. I’m really looking forward to tomorrow’s stages. Dyfi was my first ever stage in a rally car, and Myherin and Sweet Lamb Hafren are classics too.”

What’s next?
Saturday’s action is mostly in mid-Wales, with a trio of forest stages each run twice before a new asphalt stage along Colwyn Bay seafront in the evening. Crews will leave service from 05:55 in the morning and not return until 19:51, with just a lunchtime tyre-fitting zone in Newtown.

Key stage: Myherin (SS12 & SS14, 22.91 kilometres)
Seb Marshall (Co-driver car 5): “This is a challenging stage but one that all the drivers enjoy. This year we return to a few parts of the stage that haven’t been used for a couple of years. There’s a famous section through the windmills which is often affected by fog, while the section in the forest is quite slippery.”