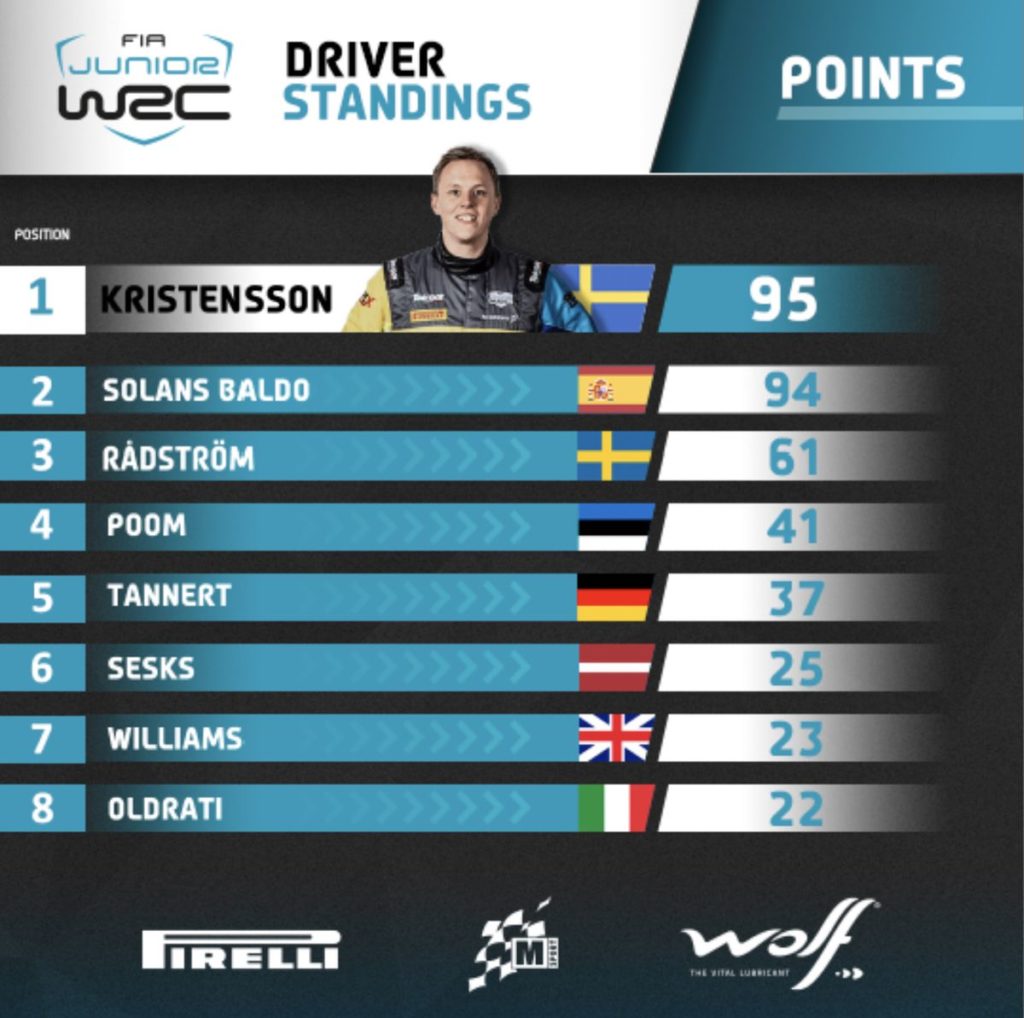 Wales Rally GB plays host to the final round of the wide-open 2019 FIA Junior WRC Championship after a hotly contested season with three different winners across four rounds so far.

72 points are available thanks to double classification points and 22 stage win points.
One of the closest points races in FIA Junior WRC Championship history
Top-nine have a mathematical chance of winning the championship.
Four best classified results and all stage win points count towards the championship.
Discounting worst classification points, just 21 points separate the top three.

In pursuit of glory
The future stars of the FIA World Rally Championship will negotiate 22 gruelling stages in their EcoBoost-powered M-Sport Fiesta R2Ts on Wales Rally GB in search of championship glory to win the biggest prize package in rallying.

The Rookie Award will be decided too, awarding the winner €15,000 towards their 2020 FIA Junior WRC campaign.

The Rally
Wales Rally GB is a classic rally that features fast and flowing stages, many drivers look forward to the event thanks to the relatively consistent surface that doesn’t rip up to the same level as most gravel rallies. It is due to the well-made roads that make up the majority of Wales Rally GB’s speed tests, however the Welsh forests are by no means a walk in the park. Unpredictable weather makes pace, grip and stage conditions as equally unforeseen which almost always throws up a surprise and keeps both drivers and co-driver on their toes. Changeable weather means that tyre choice will be of paramount importance as Pirelli will supply the Junior WRC crews with 22 K6 (soft) and 6 K4 (hard) Scorpion tyres, with a maximum of 22 tyres available to use including shakedown.

Crews will need to pay extra attention to the detail of their pace notes, especially for the morning loops, the surrounding forests can hold onto the morning fog – massively reducing visibility. It’s a similar scenario for the last stages of Friday and Saturday: the final round sees exceptionally early starts and late finishes leading to dark running. These back to back early and late finishes mean late night pace note studies will come at the price of sleep deprivation as many crews will be lucky to get four hours of sleep in on Friday night.

“The pressure is on, especially for the top-three in the championship, for Wales Rally GB. The championship fight is one of the closest in FIA Junior WRC history, I have never seen anything like this level of competition in the R2 category. It is a testament to the level of skill that Junior WRC drivers operate at. It’s still very exciting for those drivers who don’t have a great chance at winning the championship as it is the last round of the season. For those who feel they still haven’t produced their best result this season, whether it be getting stage wins, finishing on the podium or in the top-five, it’s now or never. We always see and expect some highly motivated and surprise performances at the last rally of the season. The question we all want to know is, will these surprise performances spoil anybody’s championship plans?”

71 Tom Kristensson / Henrik Appelskog:
“For sure Wales Rally GB will be the best rally of the season! It’s also the rally I have been looking forward to the most and I can’t see any better way to end the season. The character and surface is something special that I really enjoy. I’m sure this will be another amazing experience with FIA Junior WRC that we will smile about a lot in the future, we will do our best, without discussion.”

72 Jan Solans / Mauro Barreiro:
“We have reached the final round of the FIA Junior WRC Championship as candidates for the title. Honestly, when the season started, I had a lot of things to learn because everything was new for me, so I didn’t expect to be fighting for the title as I did and I would like to finish the season in the best possible way. I know that Wales Rally GB is going to be a very demanding and rough rally so we will do our best in these muddy stages and try to get the title.”

73 Dennis Rådström / Johan Johansson:
“We are really looking forward to the final round of the season. We are in a really good mood, having already had a successful test in Wales just two weeks ago. This week we won a rally in Slovenia using the M-Sport Fiesta R2T and we are progressing in the right direction. We have a big task ahead, but as history tells us from 2011 with Craig Breen, everything is possible and has already been done. We have one mission and we will give it our all. I’m looking forward to a fantastic experience and rally.”

74 Roland Poom / Ken Jarveoja:
“We had a clear plan before the start of the season: finish all of the events and get as much experience as possible. We are still going with the same plan in Wales, but of course I also want to show the speed in places where I feel comfortable. I think the stages will suit me well and if everything works fine, I’m sure we can fight for the podium.”

75 Tom Williams / Phil Hall:
“There is no other feeling when competing on your home round. It will be a very tricky event for all crews, when the pace is so high going into a round like Wales Rally GB, that will of course have unpredictable road conditions. I will use my experience of this event as an advantage, but we will need to really focus and have good preparation. We want to finish this championship on a high.”

76 Enrico Oldrati / Elia de Guio:
“We are finally at the last round of the season and already said it’s ending so quickly. We have had a lot of fun during all of this year’s events with all the team and other drivers. We think it is going to be really hard for us on Rally GB as a lot can happen in these stages. We have had a great end of summer with some testing in Tuscany and we started one tarmac rally in Slovenia as will have completed a gravel rally a few days before GB. The feeling is getting better rally after rally, we will see where we are in the championship at the end of the rally on Sunday.”

77 Sean Johnston / Alex Kihurani:
“Alex and I are looking forward to his ‘adopted home’ rally, since it’s been almost a year now since he established his permanent residency in the UK! We’re also coming into this event having finished the last rally in Finland with our best stage performance yet with the 2nd fastest time on the power stage. Our goal in Wales is to work on putting these kinds competitive stage times on the board consistently throughout the duration of the rally. Big work for sure, but we’re excited for the challenge. It’s also great to have a few more Americans making the trip over for the 2019 Junior WRC Finale.”

80 Ryan Booth / Rhianon Gelsomino:
“It is a privilege to be competing on Wales Rally GB in Junior WRC. I am extremely excited to be representing the US as one of the three American drivers. This is only the seventh rally in my career and first outside of the States, so the only expectation is to finish and gain some experience. Rhianon, my co-driver, has been teaching me a lot this year and I am excited to be able to use her knowledge and experience in such a challenge as Wales Rally GB.”

81 Keanna Erickson-Chang / Martin Brady:
“How exciting to be competing in a WRC round at last, a quite challenging test in the Welsh forests for my first too. This year has come with many new rally experiences and even more changes to my note system, I am eager to see how it all feels at the season closer. Wales Rally GB will be all about keeping up the progression I’ve made since stepping into the R2 five months ago.”