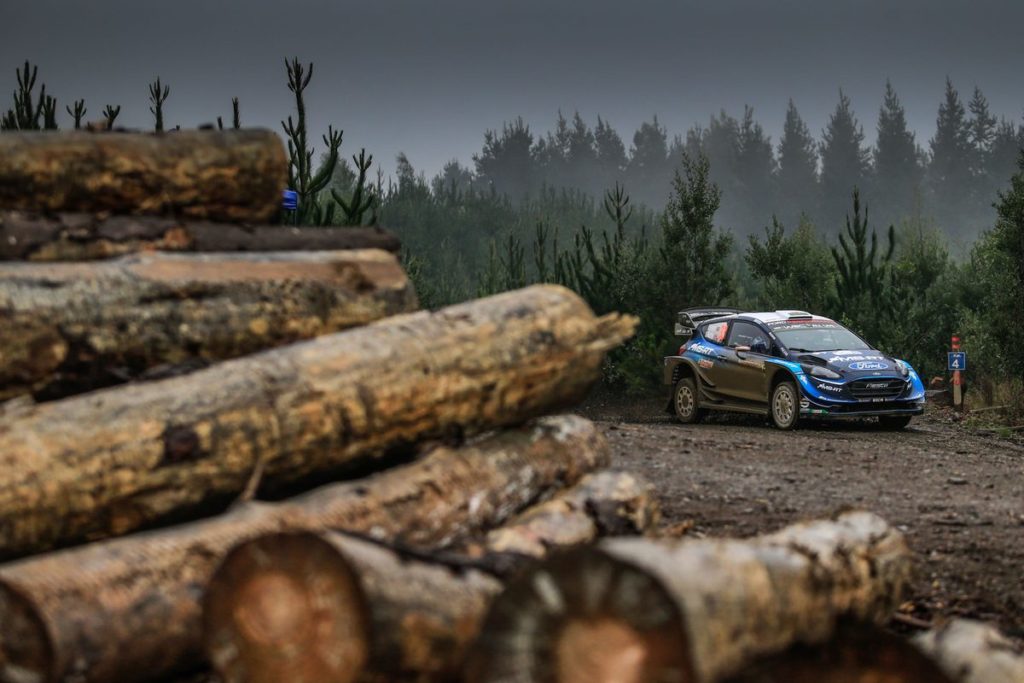 Having to forego the last three events with a back injury, the Welshman is now fully recovered and ready to contest his home event. Having completed a full day of testing in the Welsh forests, Evans and co-driver Scott Martin are more than ready for their return and keen to resume their fight for rally wins as well as a coveted fourth place in the championship standings.

Suninen and Tidemand both completed a day of testing closer to M-Sport’s Cumbrian home in Greystoke forest. The young Finn is keen to continue his recent progress alongside experienced co-driver Jarmo Lehtinen, and is also locked in the intense battle for fourth place in the championship. And the Swede will be looking to show further progress as he and co-driver Ola Fløene take to the wheel of the top-specification Fiesta for only the second time on gravel.

The team will also be celebrating 10 years of partnership with Permashine – another family-run business who ensure M-Sport’s fleet of EcoBoost-powered Ford Fiestas are always looking their best, come rain or shine… gales, fog or even snow!

Team Principal, Richard Millener, said: “I have been looking forward to this one all year. There’s always something special about competing at home, and this was the first WRC event I ever watched – so to come here looking after the team is a really special experience for me. It’s also fantastic to have Elfyn back with us. Teemu came into his own in Germany and Turkey, but there’s nothing quite like Elfyn’s experience – especially in Wales – and it’s a big boost for us all to have him here. All three drivers have a pretty good track record in the Welsh forests. Teemu won the event as part of the WRC 2 Championship in 2015, and Pontus has never finished lower than second in class – securing his own WRC 2 victory in 2017. And as for Elfyn, well we all know what he is capable of at home! It’s a tough event for everyone with incredibly long days that test the team as well as the crews, but if we can maintain focus I see no reason why we can’t be challenging for the top results. There’s a lot of ambition to do well next week, and we’ll be working hard to deliver another strong result on home soil.”

Wales Rally GB plays host to some of the most challenging conditions the FIA World Rally Championship has to offer. With its unpredictable weather and long days, the crews are made to fight hard for the top results and it’s an event that every driver wants to win.

The fast gravel stages might not be particularly technical, but they are treacherously slippery when wet and there is a real art to reading the road’s constantly changing grip levels. Then there’s the fog and the night stages, where those with the most trust in their pacenotes can truly excel. And on Saturday, the crews will have to battle all of this without the luxury of a midday service break.

With the service park moving to the popular seaside resort of Llandudno and a Ceremonial Start in Liverpool followed by a spectator-friendly Super Special at Oulton Park, this year’s event has much to offer – all alongside some of rallying’s most iconic and legendary stages!

Making a welcome return on home soil, Elfyn Evans knows what it takes to win in Wales. Securing victory at the event in 2017, he made history by becoming the first Welshman to win a round of the FIA World Rally Championship, and he’ll want to be in with a chance of adding to that next week. Preparing with a day’s testing in the Welsh forests, he and co-driver Scott Martin will be keen to give the home crowds something to cheer about this year.

Elfyn Evans said: “I’m really looking forward to getting back behind the wheel – especially as it’s on home soil in Wales. This event is the highlight of my year, every year, and when you get it right in front of all those Welsh flags it’s an incredible feeling. We have some of the best stages in the world in Wales, and it’s a proper challenge for the crews – especially if the Welsh weather has anything to say about it which I think it probably will next week. In those tricky conditions the grip levels are constantly changing and you have to be able to read the road if you want to push for the top results. We might have been away for a few months, but my motivation is as high as it ever was. We’ve had a good test, and I feel like we’re well prepared for the challenges ahead. And the goal, as always, is to push for the top results.”

Consistently improving his performance, Teemu Suninen is getting better and better and the young Finn will be on the hunt for another strong result next week. Already a winner in Wales when he lifted the WRC 2 trophy in 2015, Suninen was also in the mix for the podium positions last year, and will be keen to fight for another strong result under the guidance of experienced co-driver Jarmo Lehtinen.

Teemu Suninen said: “I really like this rally and have done well there in the past. I didn’t have a lot of experience of the stages last year, but I was really pleased with my performance – setting some good times and running in podium position before having to retire. So the goal this year will be to continue that performance, and see if we can challenge for the top positions. We completed a full day of testing in Greystoke and, even though the base there is a bit harder than what we’ll see in Wales, I think we manged to find a good set-up and will be able to deliver a good performance on these challenging stages. Maybe the biggest challenge though is the lack of sleep. Probably we will only get about four or five hours a night – and the road sections to the first stage can be pretty long. It will be physically and mentally challenging to stay alert in those first stages, but that is all part of the challenge in Wales.”

Having never finished outside of the top-two on his three WRC 2 appearances, Pontus Tidemand has a pretty impressive record through the Welsh forests. Upgrading to the Ford Fiesta WRC this year, the Swede will be tackling his second gravel event behind the wheel of a world rally car, and he and co-driver Ola Fløene will be keen to showcase their progress at the sport’s highest level.

Pontus Tidemand said: “I like Wales a lot and it’s a rally that suits me and my driving style quite well. I’ve done well there in the past which gives me more confidence, but I will still be competing against the best drivers in the world and am still continuing my own development. “At the end of Rally Turkey I felt as though I’d found the right set-up for me and that I could drive how I wanted. We had a great test with the team earlier this week, and I’m feeling more and more at home with the car. And since Wales Rally GB will be my second gravel rally with the Ford Fiesta WRC, I hope we can show some improvements. “The biggest challenge in Wales is always the unpredictable weather. We need to be prepared for everything – rain, fog, mud and constant grip changes. The roads might not be technically tricky, but the conditions are really unpredictable and that’s what makes it so challenging. The stages also change their character depending on what area we are in, and we need to be able to adjust to all of these different surface changes.”

Greensmith and Paddon in Wales 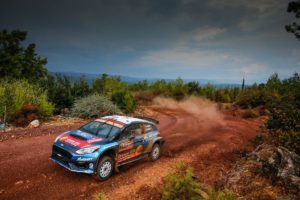 Fresh from a dramatic victory last time out in Turkey, Greensmith and co-driver Elliott Edmondson are hungry for more and confident of delivering another strong result behind the wheel of M-Sport and Ford’s latest global rally car. Competing on home soil, the young Brits will also hope to have home advantage on side as they tackle some of the world’s most challenging stages.

Making a welcome return to the service park, Hayden Paddon and John Kennard will also be hoping for a strong result as they take to the wheel of the Fiesta R5 MkII for the very first time. Using the outing in preparation for his return to the Ford Fiesta WRC at Rally Australia, Paddon is a proven rally winner and capable of challenging for the top results next week.

Team Principal, Richard Millener, said: “It’s great to see two top drivers behind the wheel of the Ford Fiesta R5 MkII for our home event in Wales. Gus showed the stage-winning pace of the car last time out in Turkey, and it was great to see him secure the WRC 2 Pro victory – even if he did give us a bit of a scare after the penultimate stage! Hayden is a proven rally winner and I’m looking forward to seeing him start his comeback programme with the team. Although he doesn’t have any experience with the new Fiesta R5 MkII, he’s a top driver who’s very capable of delivering a strong result. I’m really looking forward to this one, and I think we have all the ingredients to deliver another top performance.”

Gus Greensmith said: “It’s always a nice feeling to be back on home soil, and there are some truly legendary stages at this event. It’s a rally with some really tough days for the crews, and the weather can be really challenging too – it’s not a matter of if the fog comes, but when, and it’s that challenge that I’ve always enjoyed. It was great to secure the first victory for the Ford Fiesta R5 MkII in Turkey – albeit in somewhat surreal and dramatic circumstances! I had a big feeling of pride after that win because everyone had worked really hard. We proved our potential and the potential of the car, and have already made some further steps since then. “Our goal is always to fight for the top positions, but the competition is going to be really strong next weekend. It will be tough, but I feel we have a good package and that we have what it takes to deliver another strong result for M-Sport and Ford.”

Hayden Paddon said: “I can’t wait to get back in the driving seat, and I really enjoy Wales Rally GB. In a lot of ways, it reminds me of home and we’ll be hoping for a good run as we take to the wheel of M-Sport’s Ford Fiesta R5 MkII for the first time. It will be important to show the potential of the car which I’m sure we’ll quickly adapt to, but it’s also important that we get the miles under our belt. We’ve lacked too many rallies this year, so this will be the perfect warm up for Rally Australia when we’ll be back behind the wheel of a world rally car with the top-specification Fiesta. Although Wales is an event I’ve always enjoyed, the top results seem to have eluded us in the past. I’m confident of putting that right this year, and with the team behind us I’m sure we can deliver a strong result on their home soil.”