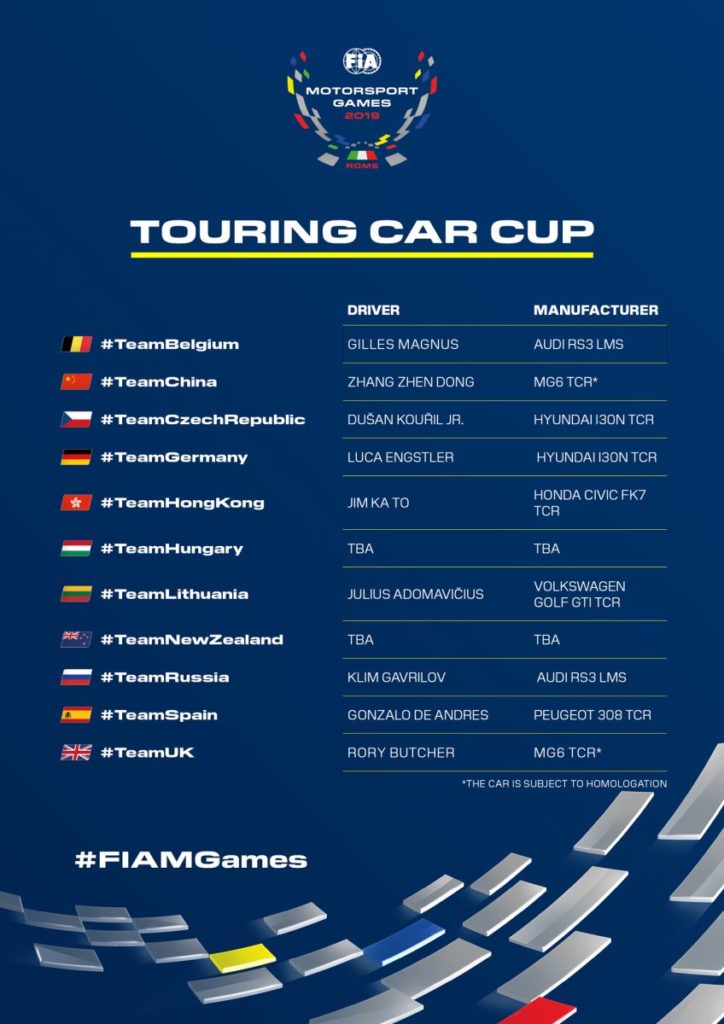 The first entries for the new Touring Car Cup, which forms part of the inaugural FIA Motorsport Games, have been received, with 11 different countries among the initial applications.

Eight European nations are represented, with Belgium, Czech Republic, Germany, Hungary, Lithuania, Russia, Spain and the United Kingdom all confirming their participation in the event. They join China, Hong Kong and New Zealand as the first set of countries to commit their respective national colours to the “tin-top” competition.

TCR Europe front-runner Luca Engstler headlines the entry. Despite being only 19, the German has already established himself as a formidable competitor. The 2018 season saw Engstler clinch both the TCR Asia Series and TCR Middle East titles, while also finishing second overall in a the highly competitive ADAC TCR Germany championship.

Currently in his third season of touring car competition, Engstler lies fifth in the TCR Europe standings with a round remaining. A winner at Red Bull Ring with his Hyundai i30N TCR, the German will use the same machine at the FIA Motorsport Games.

Butcher has already won three races this season and is fifth in the standings of the UK’s premier racing series, while the 27-year-old has Chinese racer recently made appearances in categories such as TCR Asia Series and has previously contested the TCR International Series.

Klim Gavrilov, another 19-year-old, will defend the colours of Russia. Currently a title contender in his domestic championship, the youngster’s CV also includes outings in TCR Europe and the Italian series, where he has been a race-winner this season. Gavrilov will compete for gold with his familiar Audi RS3 LMS.

Hungary and New Zealand have also submitted their entries for the Touring Car Cup. As the driver selection process is yet to be finalised by their respective National Sporting Authorities, final confirmation of each nation’s line-up will follow at later stage.

The Asian presence will be further bolstered by Hong Kong’s Jim Ka To, who will compete with a Honda Civic FK7 TCR.  Ka To is familiar with the car, having driven it at this year’s Dubai 24 Hour race.

Several countries are in the process of formalising their entries for the inaugural Touring Car Cup, with further announcements expected in the coming days.