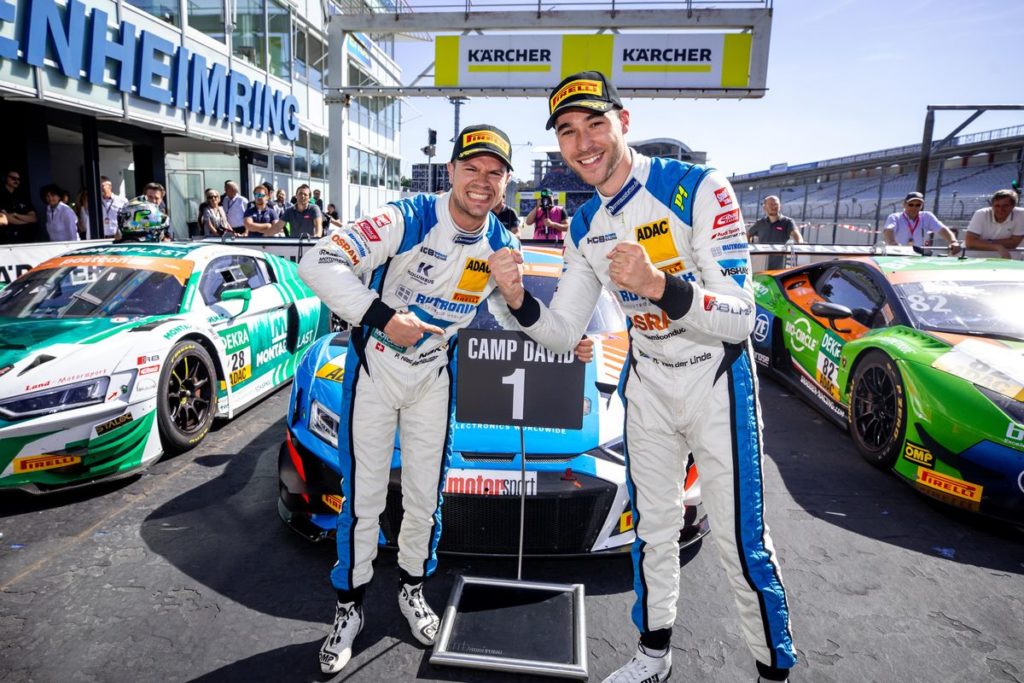 The stage is set for a summer fairy-tale and the main roles have been allocated. Patric Niederhauser and team-mate Kelvin van der Linde have won the 2019 ADAC GT Masters, and so, the two HCB-Rutronik Racing drivers have made history in the Super Sports Car League. Ever since its inception in 2007, the driver’s title in the ADAC GT Masters has always been decided on the last race weekend. Until now, that is. As the sun beat down from a clear blue sky, Niederhauser and van der Linde won the third last race of the season, pulling out a lead of 55 points on their main rivals. As a result, they cannot now be caught on the final weekend.

Niederhauser’s home fixture at the Hockenheimring was packed full of emotion with highs and lows. Team-mate van der Linde was heading for a podium in the first race when a 30-second time penalty was imposed retrospectively on the #31 Audi R8 LMS. The reason for that was quite controversial, but the race stewards had decided that van der Linde had overtaken under the yellow flags. Thus, Niederhauser and van der Linde dropped from third place to ninth position. They were very upset, but Niederhauser is not only fast and talented, but also a fighter who never gives up. 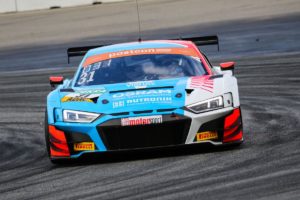 Sunday’s race was again all smoke and mirrors. Van der Linde had taken an impressive pole position, giving the pair of them the best chance of lifting the championship title. One of their two main rivals retired prematurely and the other had to tackle the race from way down the field. Van der Linde asserted his lead and handed the Audi over to Niederhauser in P1, who then brought the car safely over the finish line.

With fourth place in FP1, the two HCB-Rutronik Racing drivers had already made it clear that they intended to clinch the title before the last race weekend. Niederhauser drove in the first qualifying session but made way for Dennis Marschall in the sister car, who took his maiden pole position in the ADAC GT Masters. Niederhauser was fourth with a deficit of just one tenth of a second.

In the best-case scenario, Niederhauser and van der Linde could add another trophy to their drivers’ title. ADAC GT Masters newcomers, HCB-Rutronik Racing, lead the team classification. Their two drivers have an excellent chance of winning the team competition for the outfit at the Sachsenring season finale, 27th-29th September. 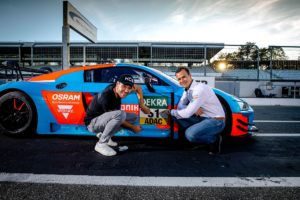 Patric, you’ve come a long way in motorsport, have experienced a lot with highs and lows. Is this win in the ADAC GT Masters your greatest achievement to date?

Patric Niederhauser : “Yes, I should say so. I’m lost for words. I’ve experienced a lot in my career and the way has been rocky at times. It’s so amazing to have my family with me to share this milestone in my career. I’ve never seen my father cry before until today. It’s all very emotional and it will be a while before I can take in what we’ve accomplished. We’ve had a lot of bad luck in recent years. Many things did not work out as they should. I didn’t even know two years ago whether I would still have a career. I simply got lucky and made some phone calls with the right people, which just makes it feel all the more incredible.”

How did the final lap go?

Patric Niederhauser : “Normally, it’s like you’re in a tunnel and fully focused. You don’t realise how you’ve done until after you have crossed the finish line. But I have to admit that Sunday’s race was a much more relaxed affair after Kelvin had done such a great job beforehand. The car was fantastic and I asked over the radio about five laps before the end where exactly our biggest championship rivals were in the race, but the team wouldn’t tell me. They just said that I should keep going. Even when I drove over the finish line, they were still telling me on the radio “Wait a minute!” I was just amazed when I heard the words on the radio on the cool-down lap as I approached Turn 2: “We are the champions!”.”

You appeared to be quite comfortable on your stint. At the same time, you did not take unnecessary risks. How did the second stint of the race go from your perspective?

Patric Niederhauser : “There was no pressure from the car behind me and I was still faster than the drivers behind me without taking any or few risks. I tried to drive as little as possible over the kerbs. Of course, you hope that nothing goes wrong and you just can’t wait to see the black-and-white chequered flag.”

You and Kelvin secured an historic title win. During the twelve years that the ADAC GT Masters has been in existence, no other driver has been crowned champion before the season finale…

Patric Niederhauser : “That obviously means a great deal to me, but it just shows that this year went well. Things generally went our way apart from Saturday’s race at the Hockenheimring. We were always among the front-runners. Many thanks to the team. When you have a good car and a good team behind you, you drive better and make fewer mistakes. Kelvin and I knew for sure that we had support from the very top. Fabian Plentz and Manuel Reuter are both racing drivers, which makes working together something really special.” 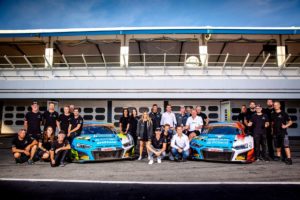 Patric Niederhauser : “I’m really looking forward to the Sachsenring. Kelvin’s record there is awesome. He has taken half of all his wins in the ADAC GT Masters at the Sachsenring. I also have plenty of great memories of the track and our car should go well there, but for now, we intend to celebrate the championship with one or two beers, definitely! However, we are well aware that there ist more to come at the Sachsenring.”