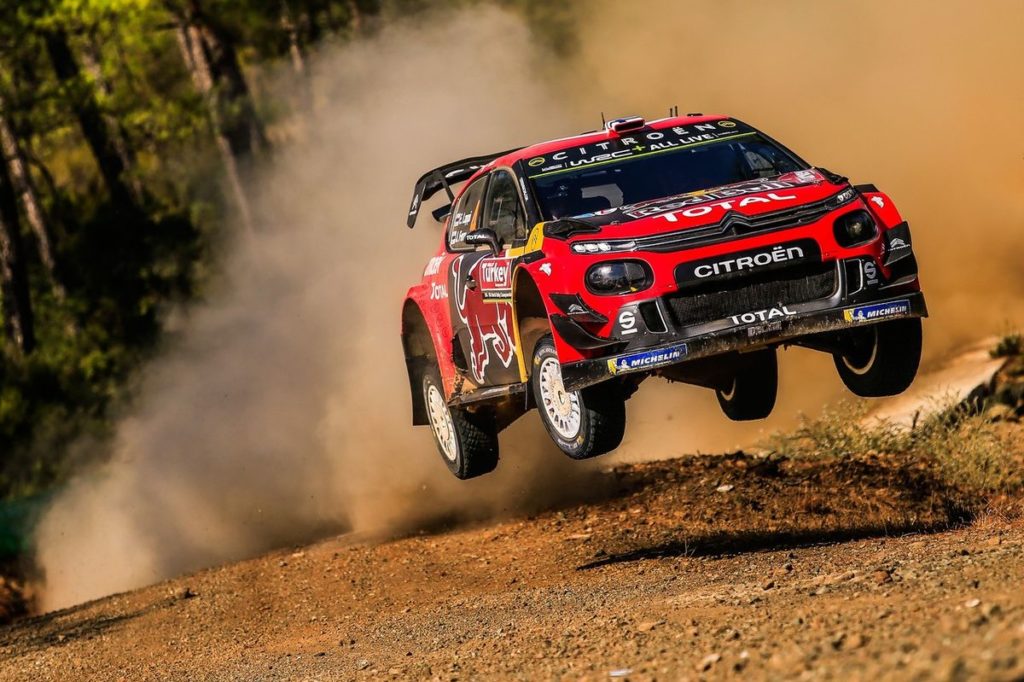 The stakes were high on today’s opening leg, which, at 159.14 kilometres, accounted for more than half of the rally’s total competitive distance. It also featured some of the roughest stages of the weekend, not least two runs on Çetibeli, also the longest of the rally (38.15km).

The Citroën Total World Rally Team showed impressive form in these very demanding conditions, confirming the quality of its pre-event preparation as well as its determination to turn things around in the championship.

Making full use of their starting position down the running order (ninth), Esapekka Lappi and Janne Ferm kicked off the day with a second fastest time in the C3 WRC, before grabbing the overall lead with a stage win on the first run on the decisive Çetibeli stage. Totally at one with their Citroën, the Finns held onto their lead until the end of the day, despite their road position becoming a distinct disadvantage on certain sections of the afternoon loop, with more and more sharp stones pulled loose by those higher up the running order. In fact, it was quite an achievement that they held onto the lead: they were the only crew to be running on hard Michelin tyres and therefore had to soldier on when rain appeared on the final two stages of the day.

Faced with less grip from their position of third on the road, Sébastien Ogier and Julien Ingrassia also had a trickier start to the day with a puncture six kilometres from the end of the opening stage. The stroke of misfortune cost them a few seconds and also compromised their tyre strategy for the loop, but it did not prevent them from climbing back up to third overall on the next stage. Another two consecutive third fastest times in the afternoon confirmed the excellent form of the C3 WRC on these roads and meant the French crew ended the day just 17.7s behind their team-mates. Both Citroën crews are now certain to enjoy a good road position for the rest of the rally.

Day two sees the competitors tackle 110.10 kilometres of timed stages. The highlight will undoubtedly be Yesilbelde (33.00km), one of the slowest stages contested last year (around 75kph), where the crews and their cars can expect to be sorely tested.

“We had to get through this opening leg without any hitches, as it always decisive for the rest of the weekend. Both our crews did a great job, staying calm and collected. They managed to find the right balance between pushing and looking after their cars and tyres when the extremely rough roads became treacherous. Today also confirms that the C3 WRC is competitive again. We’re now going to use this evening’s service to make sure we keep up the momentum tomorrow because our rivals are not far behind.”

“It was a really tricky day and I’m pleased to finish it in this position. I lost the splitter on the front bumper on the opening stage of the afternoon and that probably affected the car’s aerodynamics towards the end of the loop. Although conditions on tomorrow’s leg are expected to be a little less rough than today, there will still be some very tricky sections that we’ll need to get through without incident. I think we can expect it to be another big fight and you can count on us to be pushing hard!”

“Obviously, it’s been a good day for us! We didn’t have any issues at all and I could do what I wanted in my C3 WRC. I think we adopted a smart approach and managed to find the right rhythm, trying to stay in the lines as much as possible. I’m not really a huge fan of slow, technical stages, so I’m pleased with my performance today. But there’s still a long way to go. We’ll just try to keep doing what we are doing and see how we get on.”

0 0 0 0 0
Previous : WRC – Suninen shows speed and srenght
Next : Toyota Yaris WRC trio to fight on after a tough Friday